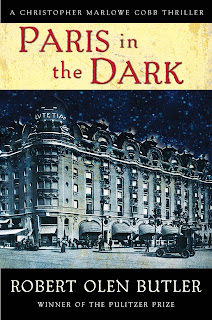 Weirdest thriller I ever read. Slow, yet engrossing with well-paced suspense and plausible action. Sort of a pop literary thing that avoids pretension as well as the de rigueur cheap sizzle publishers assume the genre market craves. I chose it for the promise of its title: Paris in the Dark. I spent some time in Paris long enough ago to feel the tug of nostalgia for its uniquely familiar ambience—unique among all other cities I’ve visited, its familiarity groomed over years of hearing and reading more about Paris than any other city I knew of. Prompting me also to read Paris in the Dark was knowing it was set in the WWI years, a taste for which I’d acquired recently from John Buchan’s wartime thrillers.
But...no similarity between Buchan’s swashbuckling Richard Hannay and Robert Olen Butler’s Christopher Marlowe “Kit” Cobb, a queer mix of Hamlet, Ernest Hemingway, and James Bond. Another big difference, which I didn’t discover until I checked the publishing date of Paris in the Dark. Buchan wrote The Thirty-Nine Steps and Greenmantle during the WWI era, with its stereotypical characters and manic lingo. Paris in the Dark came out last year, giving it the advantage of a century of social nuance that enriches the historical perspective with depth and texture.
Kit Cobb narrates Paris in the Dark so intimately we’re embedded in his head, privy to his every whim and worry. I found this irritating at first, as the constant mulling over what to do and how and when and where to do it seemed unnecessarily meticulous, the to be or not to be soliloquy playing over and over and over. The irritation soon turned to fascination, though, as I sensed the author’s invisible hand on the controls moving the story deftly toward its inevitable conclusion. Cobb, a credentialed news correspondent from Chicago, is also a secret spy for an unnamed American government agency. Overtly, he’s doing a story on the American volunteer ambulance drivers based at a makeshift hospital in Paris. Meanwhile, working for his spy boss, James Polk Trask, trying to identify, find, and kill the saboteur who’s setting bombs off in public places. He and Trask are working unofficially with the French secret service, which gives Cobb the name and address of a German informant living in Paris.
Cobb, who speaks fluent German, learns from the informant of a German assassin recently arrived in the city posing as a refugee. Cobb locates the assassin in a German-run bar, and here we get a look at Cobb’s struggle to manage the separate roles of his conflicting identities as he makes friends with the refugee German bar patrons. After buying a round of pricey imported Kulmbacher beer he begins to feel a closeness with these patrons despite knowing he might have to kill one of them. He creates in his head a German word—Bindungsehnsucht--to describe this closeness:
A deep and complex longing for an emotional connection, for a bond. I was surprised to think of this. I was here as a spy. One of them— if he was not here at the moment, he could well have been— one of them that they would hide and even assist could be a killer of civilians in the name of war. The men in this room were the Huns. And the connection they were creating between us was built upon my lies.
But superficial lies. Lies that could easily have been replaced by equally superficial truths. So easily as to show how irrelevant lies or truth were to the making of this bond they sought. Because the biggest surprise of all was that I was feeling the Bindungsehnsucht in me as well. That they were Germans and I was an American or even that I was an American spy portraying an American German to help prosecute a war against them: all that seemed somehow irrelevant. In this moment we were simply men. In a bar. Finding things to bind us, to give us cause to shake hands, lift our glasses, drink in concert, prop each other up, get varying degrees of drunk together, come to a rapport. That the rapport could be achieved over trivial and interchangeable things only spoke to how deep was the longing itself and, therefore, paradoxically, how profound was the rapport.


Of course he has a fling with the head nurse at the American hospital, and has to balance his conflicting roles for her sake, as well. But this is a thriller, so things are not always what they seem. Cobb finds the bomber—two of them, in fact—and, despite his claustrophobia from having been locked in a Vaudevillian trunk as a child, climbs down into the famous, skeleton-crammed Paris Catacombs where he believes the two terrorists have gone to plant a bomb under the site of a critical meeting between the French president and top military leaders of England and France. The chase is on, in the dark amid grinning skulls and scuttling rats. Cobb figures the bomb has a ten-minute fuse. He hears the terrorists up ahead... 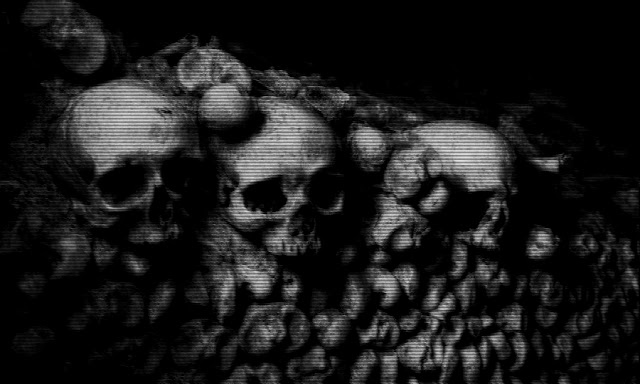 As an example of Pulitzer-winning Butler’s mastery of his craft, the following little scene sticks in my imagination more memorably than the entire Catacomb chase. Cobb and Trask are sitting in a cafe intensely trying to come up with a plan to catch the bombers: “I thought to simply drink my beer,” Cobb tells us, “and was surprised to see it hanging in the air before me. I’d lifted it along the way but I couldn’t recall when.
“I put it down.”
Pretty sure these guys were not doing recreational drugs.