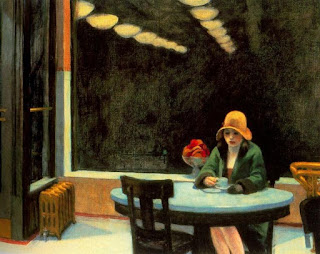 Not especially surprised when I arrived at the poem Her Life is an Edward Hopper Painting, being in one myself from the beginning of Tobi Alfier's latest collection, Grit and Grace.

From the git-go: “All that is left sometimes, is to hold faith in tradition and comfort—dog laying in front of the fire, a bit of spirit to make the kisses sweet, one last song hanging in the air.” Actually that’s the last stanza of the first poem, Before any Words are Spoken, but even at the first I’d succumbed to the mood of inevitability with its respites of blessed solitude. I was one of the nighthawks in Hopper’s diner, sharing space with a stranger or two lost in private thoughts as was I, ingesting Alfier’s knowing sensibility along with my coffee and wedge of lemon pie.

Alfier knows Hopper’s people. They live at the edge of survival, with little chance of ever realizing their dreams, and knowing it, but plugging along anyway, held together with determination if only just to keep on going. The unnamed gent who walks in the cemetery, following his doctor’s orders to do ten-thousand steps a day. “All that is left is his faith in ten-thousand, the footfalls of loping deer, headstones in icy winter, and the last song hanging in empty air, his bold baritone in the chorus.” 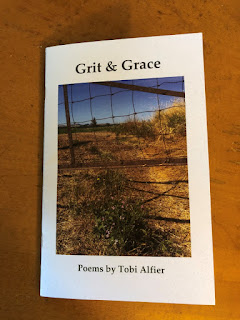 Or the three long-retired, unnamed barflies who habituate Harold’s Place: “These guys wear the stamp of fisheries, the prison, or the old scrap yard—stories told by scars, tattoos, language, and the speed at which they polish off their pension’s allotment of booze...They’ll die here, tilting barstools hug their asses barely shy of Heaven.” If they feel sorry for the way things worked out, they keep it to themselves, abiding Aristotle’s sentiment Alfier quotes: “The ideal man bears the accidents of life with dignity and grace, making the best of circumstances.”

Would that the patriarchal sage have known The Blind Woman [who] Touches her Toes in the Sea. “Gentle and chilly foam tickles her toes but does not scare her. The heart can only do this work alone, she thinks, as she often does, thankful that no one comes to ‘help’ her walk back to the street.” Dignity and grace—and love (for that you must read the poem).

Although “church” is no slur among Alfier’s people, the biblical “grace” would seem to be missing for many of them, but the occasional angel does appear. Most memorably for me is “Viv” the motherly diner waitress in Decaf or Regular who can tell when it’s time to cut off your caffeine. “She’ll know if you stayed up all night to study, fueled by No Doz and Red Bull—she knows the only way you’re gonna get out of this truck-stop town is to do well, or you’ll be takin’ the lunch rush over for Manuel. Not good.” She’s the girl in the Edward Hopper painting:

hair up and wrapped in a smooth chignon that the glow

from a thousand fireflies of motel blinds makes shine

red as the sun in summer. A tight boiled-wool

skirt halfway up to hail Mary full of grace, shoes

to bring her eye to eye with the deep lines

in your weathered face.

She is the nightwind, the motel clerk, the diner waitress

rolled into the fantasy you’ve had since forever.

She’s the bartender and barmaid—

sometimes your desire. At others your regret.

In truth, this is your story. You are the one with shoulders

tight as the traffic that winds through the city,

She’s a bit dusty, like a wedding dress never worn,

packed away in a chest in the closet. Her cheeks the deep

rose of a hot desert wind. Her lips pursed—

with disdain or delight—it’s impossible to tell.

She’s the wildflower no one can name, windchimes

caught in a forgotten tune. A time-stamped photograph

of empty, she sits with her coffee, silent and alone. 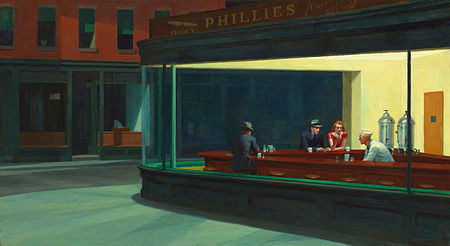 Here’s a stanza from Aftertraces that perfectly captures the way I feel this morning, this spring, if you will, this Edward Hopper aperitif:

The odd dust devil kicks its heels up

the unpaved road outside her patio, masks the colors

of early wildflowers we can never praise enough

as they start to peek through mudded earth

in the fields beyond... 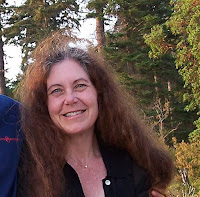 Tobi Alfier is a multiple Pushcart nominated poet and Best of the Net nominated poet whose poems have appeared in many publications. She is also the co-editor of the San Pedro River Review. You may contact her at sprreview@gmail.com.

Posted by Mathew Paust at 7:59 PM No comments: 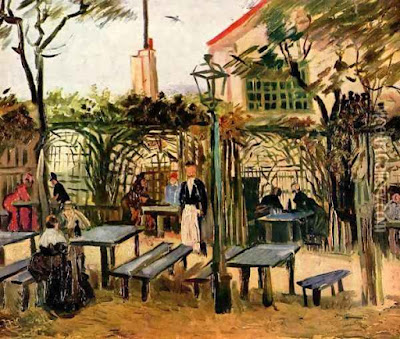 I would say Carole Mertz's new collection of poetic writing is, were it a drink, a supremely fine Cognac. Upon reflection, it is a drink—of words and spaces distilled with intimate care to reveal a portmanteau of nuances aged in loving casks from as far back as nearly five centuries (not considering how many years Sofonisba Anguissola might have spent painting The Chess Game from which Mertz took the inspiration to write The Learned Ladies).

I say “would say” because, frankly, my palate’s sophistication deficit could easily betray me and confuse the Cognac with a cheap brandy. A waste to the connoisseur, presumably, but I’ve a worldly acquaintance who swears by a budget-friendly Portuguese brand that I’ve tried and found startlingly agreeable. What I’m trying to do here is lay a little groundwork for a confession that my palate for poetry is so personal I can’t really vouch for...waaaaitaminute—that’s the whole point of poetry! From the heart and mind of the poet. Period. A bonus should the poem connect directly with heart and mind of even one other human being, if only for a flash. 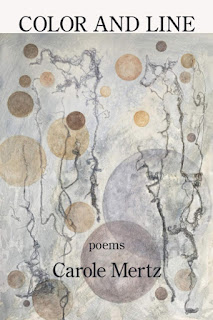 Mertz’s collection, Color and Line, contains a myriad of insightful flashes, some so sublimely lucid and intricate they’re still gamboling on my brain pan, and may well continue tickling its synapses for as long as they’re alive. I’m already happily drunk on them! And there’s a presentation bonus with this collection: examples of different styles and types and traditions of poetry, including a “cento,” which borrows lines from other poets, a “title poem” taking titles from other writers and arranging them into a story, and one built on a familiar hymn. Several are “ekphrastic,” which are inspired by visual art, such as The Learned Ladies.

My favorite of the ekphrastics was inspired, I venture to suggest, by two separate paintings—The White Soup Bowl, done in 1771 by Anne Vallayer-Coster, and Antonio Lopez Garcia’s 1971 work The Dinner, which I found displayed side-by-side when I googled the older painting. Mertz doesn’t mention Garcia’s depiction of an adult and a child alone at the dinner table, nor does White Soup Bowl reveal any human beings at or near the groaning board. Mertz might disagree, but I submit she saw the two paintings together, and her imagination took off from there and gave us Francois Enjoys an Evening. She starts out describing the bowl: “a very heavy cooking pot made of twice-baked clay. Do you hear the lid scrape the lip of the pot? Do you smell the onion soup brewing within...” I sure can. It’s making me hungry, and I just finished a bowl of chili!

Now she takes us behind the curtain of steam rising from the pot: “you are surrounded by friends, and the talk is lively...” OK, I’ll take her word for it. No choice. But now the adult and child (or poetic surrogates) step from their painting into The White Bowl, and come alive. “How charming that young girl looks, across at the table to the left. Her father, busy with the chatter, does not see her drop her napkin and reclaim it, the curls of her rich brown hair falling briefly across her face, concealing for a moment her wide, dark, and beautiful child-eyes...” We find ourselves part of the scene, caught between two centuries, wanting to dunk some bread into that steaming pot and make small talk with father and daughter, involved in a story told in the sensuous, evocative language of someone who likely spent more time choosing her words, getting them right, than the chef spent readying his cheese and onions for the broth.

First runner-up (sounds better than second place) for my favorite ekphractic poem in Color and Line grew from a painting by one of my favorite artists, Vincent Van Gogh’s cafe scene La Guinguette. The poet titles her inspiration Come Share a Glass with Me, describing in fine detail what she observes in the painting and bringing questions and ideas from what the scene says to her. The “guinguette,” she tells us, quoting from a French dictionary, is “a small cabaret either with or without a small dance hall where people can gather to drink a cheap ‘but malicious’ light green wine. She draws out attention to couples seated in the outdoor alcoves. “What do the people discuss? Do they talk of the rising price of cabbage? That Jeanne will meet Pierre after his shift ends?”

Alas “guinguettes died out when the cheap wine could no longer be had,” Mertz informs us, “when Parisians no longer swam in the nearby Seine. Their habits changed; they no longer came to the guinguette for a relaxing glass of that light green wine.” 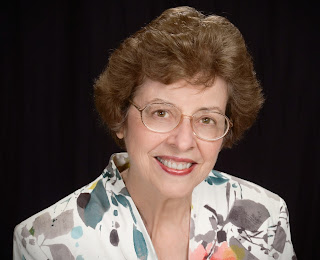 Mertz is Book Review Editor at Dreamers Creative Writing, a Member of the Prize Nominations Committee at The Ekphrastic Review, and served as advance reader for Women’s National Book Association’s 2018 poetry contest. She judged (in formal verse) the 2020 Poets and Patrons in Illinois International Poetry Contest.

“There’s a freedom to writing ekphrastic poetry that appeals to me,” she says in Color and Line’s preface. “One can allow the artworks to speak directly and in specifics or one can muse on the artist’s intentions and leave unanswered questions.

“At times I research the artists and introduce a bit of their history into my writing. Often first impressions work themselves onto my pages and I let them stand. Sometimes I allow myself free rein to stray into open pastures.”

Posted by Mathew Paust at 9:38 PM No comments: