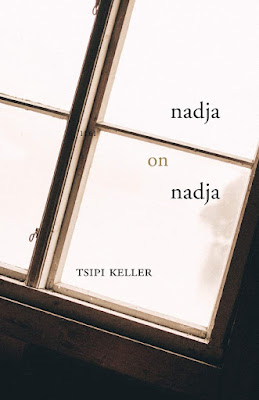 Subtle surprises came at times on the turn of a single word the several hours I spent captive in Nadja's head. I found these unexpected nuances the more alarming amplified against a familiar landscape, and the experience left my head spinning as crazily as hers by the time I escaped. Nadja on Nadja is an intimate journal of a thirty-something woman's whims, fears, notions, hopes, and disenchantments as recorded by an omniscient narrator who takes us past all boundaries to a place so private Nadja would wish us into Hell's ninth circle were she to find out.
Our trespass enters her thoughts at her workplace, on the twelfth floor of a 5th Avenue Manhattan office building. She's on her way to a "breathing break" in the bathroom, fleeing the micro-scrutiny of her boss, the fiftyish Jerry, whom I instantly despise. Nadja finds Jerry as contemptible as she does the corporate environment where she's worked the past seven years as a research assistant in the library of a "large accounting firm." In the bathroom, she enters a stall next to the outside wall with a large window. Looking out the window, she briefly considers what it might be like to jump from there onto the street below:
"She imagines the fear catching in her throat as the wind rushes past her face—the sheer, if brief, exhilaration of giving in to nihilism and madness. In another part of her brain, it surprises her that she, of all people, would even entertain such a thought; she who, in spite of everything, is usually optimistic, not to say hopeful, and is always aware of what is good and what is bad for her."
Always aware, yet not always able to resist reckless impulses. This gives her an unpredictability that holds me rapt as it sparks a melding of our minds. I want to punch Jerry's face. My fist hesitates when she has a "flicker of remorse" for our dislike of the nagging little twit who "walks like a peacock." This momentary softening comes after he suggests she's too erratic. "He may have a point there," she admits. "Maybe Jerry is a nice man, and she, a tormentor against her will, brings out the worst in him." Nah, despite our closeness I can't buy that. The guy needs a serious hurt.
And then there's her squeeze, Raoul, whom I also dislike at first, but in a different way. At the mere mention of his name, before we meet him, a range of emotions disturbs my relationship with Nadja: I'm old enough to be her father but closer to her than a father should be. I feel jealous and protective, but then a pang of empathy for Raoul when she mentions to herself possibly dumping him. No apparent reason. Fickle woman, I think, but not dismissively.
"Woman." Ah, yes! Almost forgot to mention Woman Ending Badly, the novel-in-progress Nadja's surreptitiously working on at work, sneaking in writing spurts when she thinks no one's watching. Frequently, as her mind flees Jerry and worrying about him, Woman, as her creator calls her protagonist, appears as a rescuing distraction. Nadja projects this eponymous character onto an imaginative screen, and watches Woman walk into the office of her superior to be subtly abused (Woman wonders) by the boss’s apparent massaging of his groin all the while Woman is in his office.
Woman Ending Badly never advances beyond this ambiguous scene, but the title alone plants an ominous question when Nadja introduces it. Discussing her choice of title with her best friend, Sabine, she says, “I have this idea about women in trouble of their own making. Women who end badly because of their own gullibility and poor judgment. In fiction and in life.”
When we meet Raoul, I kinda like the guy, He’s about a decade older than Nadja, pleasantly married, with a couple of kids, and seems to be a decent husband/father despite his cheating with Nadja. He makes a decent living at some kind of mid-level management job. Nadja reflects now and then that his wit is a tad limp, but I find him rather—how shall I put this—rather quicker witted than me, a recognition that bugs me a little about Nadja.
Nadja and Raoul spend a long weekend at Sabine’s cottage on Long Island Sound. Sabine, a published novelist, lives mainly on inherited enough money, and suffers from writer’s block. When the two are together, in person or on the phone, they converse at a speed and with an intimacy I find nearly impossible to follow, remembering my younger sister with her friends when we were kids. In fact, Nadja considers she and Sabine “like two little girls, trapped in women’s bodies.”
Returning to her job after the relaxing weekend, Nadja learns she’s about to be fired. Not especially surprised, having made a point over the years of being a few minutes late every day, spending too much time on “breathing breaks,” being snarky with Jerry, working on Woman on company time, nonetheless her nerves get to her as the suspense builds. When she sees the “Angel of Death,” the employees’ name for the company’s human resources director, enter Jerry’s office she knows the game is over.
I’m with her all the way here, admiring her spunk, her refusal to kowtow in the dismissal ceremony. Something she’d shared earlier buoyed me as we walked through the labyrinth of cubicles to meet Jerry and the Angel: “She remembers that she is alone in the world, and not as smart and ‘with it’ as others seem to be, and that her only true talents are hope and delusion. But, she reminds herself, she does have a gift: she is tenacious.” 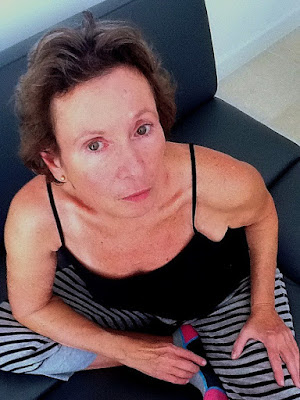 I had not read any of Tsipi Keller’s previous novels, well-received and honored, before I became aware of her in the online writers’ community Fictionaut.com. That’s where she posted the first chapter of Nadja. Those first few sentences hooked me good. I believe I’ve swallowed that hook.