NOT QUITE DEAD ENOUGH – Rex Stout 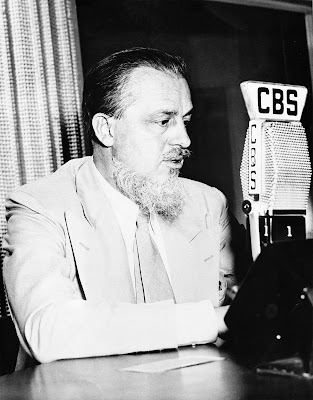 Archie's in the Army, and Wolfe is dieting and doing roadwork, trying to get in shape to fight for his country. Reading that sentence you might have thought this is some kind of satire. Nero Wolfe dieting? Jogging? No Archie? Pfui!

But wait. It's 1944, and WWII is raging. Rex Stout himself is fighting for his country, exposing enemy propaganda in regular broadcasts via CBS as "Our Secret Weapon." How could he not allow his two favorite detectives to join up? Wouldn't be patriotic. Hence Not Quite Dead Enough, which consists of two novellas: Archie Goodwin, a major in Army Intelligence, deliberately incriminates himself in a murder, to persuade his bull-headed former boss to give up notions of soldiering and come to work with him doing detective work instead of carrying a rifle. It's the old fall-backwards faith test with the point of a sword the bad-faith consequence. That's the first novella, which gives its name to the book. We may assume Wolfe relents, saves Archie's skin, and agrees to lend his brilliant mind to the Army, because if he doesn't we won't have Stout's two favorite detectives back in harness in the second novella, The Booby Trap. And we do.


In Not Quite Dead Enough Archie's mission is to win Wolfe away from his determination to give up his reclusive habits, sumptuous food, and tending his rooftop orchids. Since beginning this Spartan regimen with Fritz, his live-in chef, Wolfe has refused to meet or speak on the phone with anyone from the Army. He's even dismissive of Archie when he shows up unannounced in uniform, giving the impression he's on leave. Archie tries his signature sarcasm: "You are wrong," he tells Wolfe, "if you think your sudden appearance in the front lines will make the Germans laugh themselves to death. They have no sense of humor.” It doesn't work.
Restrained for time, and seeing he's unlikely to persuade Wolfe without resorting to drastic measures, he resorts to a drastic measure: implicating himself in the strangulation of a young woman with a personal problem who'd been trying unsuccessfully to meet with Wolfe. Archie deliberately leaves his fingerprints in the woman's apartment, yanks fifteen hairs out of his head and inserts them under the scarf that's wrapped around the corpse's neck. It doesn't take Wolfe's and Archie's police nemesis, Inspector Cramer, long to identify the fingerprints and the head that had produced the hairs. 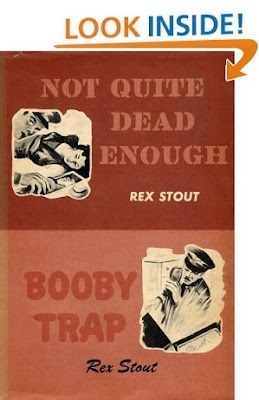 In jail already next morning as a material witness when the local paper hits the street, Archie reads on the Courier's front page: ARMY MAJOR HELD IN MURDER CASE/NERO WOLFE’S FORMER ASSISTANT LOCKED UP. Well, guess who skips his morning jog with Fritz and shows up at the jail, outraged? Archie persuades Wolfe he'd done what he did to get Wolfe's attention, and Wolfe agrees to help Archie prove who really strangled the woman, and the two persuade Cramer to release Archie so they can solve the murder. This they promptly do. Did we have any doubts?
Comes now The Booby Trap. Wolfe has for some time since the murder case given up "training" for the Army, and has been working with Army Intelligence in apparently various classified matters. Their current case involves a letter a local congressman's received warning that the purported suicide of an intelligence captain was in fact a murder, and that it involved the massive theft of war materials, including a newly developed grenade. Archie and Wolfe meet with a general, a couple of colonels, and the congressman to discuss the letter. Afterward, when everyone's at lunch, one of the grenades explodes, killing Archie's commanding officer, Col. Ryder. Ryder had told everyone at the meeting he planned to leave for Washington right afterward to speak with Army Intelligence's commanding general.


Archie determines that one of the special grenades had been rigged to detonate when Col. Ryder opened his suitcase. Archie and Wolfe set up their own psychological trap, and inviting everyone who had been in the meeting to Wolfe's brownstone home/office. It's a standard setup Wolfe has used in other cases with multiple suspects. It always works, and, of course, it works now. I found the ending a tad unexpected, but upon reflection I could see at work a nod to the tradition of honor in military situations dating back to the conception of honor in military situations. As a modern metaphor it is called falling on one’s sword. 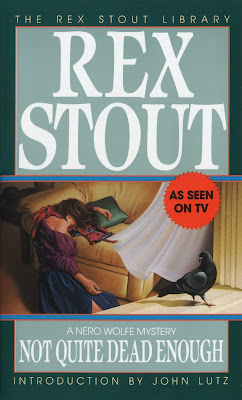 Inspector Cramer makes an appearance in this case, as well, despite the fact it’s an Army matter, because the Army’s offices are in Cramer’s borough. The “top mackaroo,” as Archie calls the New York unit’s commanding general, is arguing with Cramer and Wolfe over the efficacy Cramer’s interest in the investigation. Cramer notes that he always works closely with Wolfe.
"Show me a corpse, any corpse,” he says, “under the most ideal and innocent circumstances, with a certificate signed by every doctor in New York, including the Medical Examiner. Then show me Nero Wolfe anywhere within reach, exhibiting the faintest sign of interest, and I order the squad to go to work immediately.”
“‘Bosh.’ Wolfe nearly opened his eyes. ‘Have I ever imposed on you, Mr. Cramer?’
“‘What!’ Cramer goggled at him. ‘You’ve never done anything else!’
“‘Nonsense. At any rate, I’m not imposing on you now. All this is a waste of time. You know very well you can’t bulldoze the Army, especially not this branch of it.’ Wolfe sighed. ‘I’ll do you a favor. I believe the mess down there hasn’t been disturbed. I’ll go down and take a look at it. I’ll consider the situation, what I know of it, which is more than you’re likely ever to find out. Tomorrow I’ll phone you and give you my opinion. How will that do?’
“‘And meanwhile?’ Cramer demanded.
“‘Meanwhile you take your men out of here and stay out.’”
And he did.
[Find more Friday's Forgotten Books links at Todd Mason's amazingly eclectic blog]