TALL: Love and Journalism in a Six-foot World – Nancy Stancill

Seeing the title of the first chapter of Nancy Stancill's autobio, "Cutting Ingrid's Legs," made me wince. Still does, even though I know the rest of Tall builds on a crescendoing awareness that being a comparatively tall female hasn't been the bummer of a ride girls may fear it will. But still...

That some young females actually consider chopping off a few inches of thigh bones to better fit in with the herd is bad enough, and knowing some actually do it breaks my heart. Social tyranny on a par with Chinese foot-binding.

Shame on our society!

"I’ve talked to many tall women who recall good times at the midpoint of childhood," Stancill tells us. "They didn’t worry about how they looked, how they dressed, or whether boys (or the larger society) approved of them. Then puberty kicked in and their lives would change abruptly." She looks back at her own gig with the "mean girl syndrome" and the social hierarchy it embraced. "I was low on the popularity pole. It was a lonely period in my life." 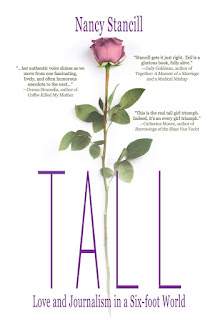 Having parents who understand helped ease her anxiety. In high school, where she was the tallest girl, she felt additional pressure to distinguish herself. It seemed natural to try out for the cheerleading squad, “that apex of high school success,” following in her sister’s footsteps. But the idea of “jumping up and down and screaming about football” didn’t appeal to her. She put off telling her parents, worried they’d be disappointed. Their response, when eventually she shared her misgivings: “‘Honey, you do whatever you want,’ my dad said. ‘You don’t have to do anything for us.’

“My parents came through by that simple act of acceptance and I never forgot it. You can forgive a lot of less-than-perfect parenting if you know your parents really see you.”

Getting good grades and serving as editor of the school newspaper didn’t hurt her confidence, either—and helped launch her on an award-winning career as a journalist. Her investigative reporting for The Houston Chronicle and the Charlotte Observer helped bring criminal convictions and prison time for wrongdoers. And her involvement with Investigative Reporters and Editors (IRE), a nationwide network of journalists, included a five-year stint on the organization’s board of directors. “Journalism tends to be a lonely profession," she writes. "Sometimes you feel like it’s just you and your computer against the world. IRE eased that feeling for me, knowing that good colleagues would help if needed."

Her stories included exposures of a rogue CIA agent selling arms to Libra, a sheriff running an illegal speed trap, and a landmark case testing whether Hispanic students should have bilingual education. Both the rogue agent and corrupt sheriff were convicted, and the judge ruled in favor of bilingual education.

She titled one chapter “Was I in danger? I’ll never know,” and recounts her investigation into suspicions that the chancellor and the president of a Texas community college were involved in shady deals with the CIA and military bases. Here, she says, is where her physical stature proved to be an asset: I think my tallness made me appear stronger and less vulnerable to college leaders seemingly intent on harming me. I know that being six feet tall in this situation made me feel like I had an invisible shield of safety." Perhaps that edge in fact did save her life. A couple of confidential informants—one a mid-level administrator of the college—told her that an instructor there who’d tried to blow the whistle on the college had turned up dead in the Houston Ship Channel. 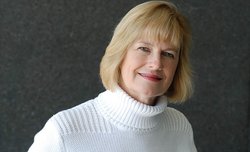 “I never could confirm whether the chancellor and president were involved in the teacher’s death," she writes, but later used the ship channel death as a scene when she segued from journalism to writing fiction. Both of her novels—Saving Texas, and its sequel, Winning Texas--feature a tall, attractive, intrepid female Houston journalist, uncovering political shenanigans and criminal activities mined from Stancill’s personal experiences at the Chronicle. Her historically based fictional themes are as current as tonight’s TV breaking news and tomorrow’s front page headlines.

Typing the word personal up there in the paragraph about themes reminds me I nearly overlooked the truly personal stuff promised in Tall’s subtitle: “Love and Journalism in a Six-foot World.” Romance: another challenge she found her height threw her way in a society that likes its women to be at least a little shorter than men. She dated a lot working her first full-time newspaper job, in Charlottesville, Va., but nothing stuck, none of her boyfriends were able to overcome her anxiety over simply being too tall. This all changed when she fell in love—for the first time—with “Gary”, an advertising salesman at the paper. First love/first fooled—isn’t that how it goes? Eventually, after Gary’d stolen her heart, she found she’d mistaken his “domineering attitude as self-assurance instead of self-centeredness.”

Moving east to Newport News to work at a bigger paper, she met the love of her life. It happened in her kitchen during a party she was giving one night in October 1973. She and Len Norman are still together, now happily retired. They live in Charlotte, N.C.