Pretty to Think So

They never had a chance to talk before the raid. The cops came through the front door, and those who were quick enough got out the back and scattered into the night. She was one of the lucky ones, or so some might consider. She didn't. She'd searched in the dark for him, hoping somehow the glow would reveal him, the glow she'd felt that single time their eyes had met, an intimate glow that promised everything she'd ever imagined wanting in life.
She never really gave up the search. He must have been among those arrested. She'd never gotten his name, never saw him again.
And now, in her hospital bed, awaiting test results she'd been dreading for months, she strains to justify a lifetime of ambiguous satisfactions, the series of jobs, the someone else, family...a heart never quite able to give up a certain yearning,
A doctor studies an x-ray print at the foot of her bed, his hesitant poise casting a grim shadow over the room. The shadow melts into a nearly forgotten glow when he looks up.

I wish Super Blood Wolf Moon had been available several years ago when I was substituting for the regular teacher in a high school honors literature class. I didn’t have to teach, just sit at the teacher’s desk and stay awake. The students sat at their desks staring at worksheets. At first I thought their stares were fueled with pure scholastic intent. But soon enough, when I saw no one was doing anything besides staring, I realized they were in a trance, unable to move or talk or look at each other. Or write. Soon enough I learned Wallace Stevens was to blame. 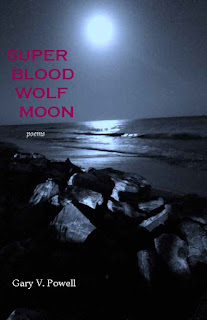 When your old girlfriends
begin to die like
dogs you’ve buried over
the years,

There are fourteen more stanzas in Old Girlfriend. I laughed out loud, alone in my apartment, each time I read On Learning of the Death of an Old Girlfriend on Facebook before Finishing Your First Cup of Coffee, and the laughter has continued long afterward, sporadically, dieseling like an old gasoline engine that doesn’t want to stop, kicking up now and again mysteriously, and occasionally in delicate social proximities. Want another one? Stanza? I don’t see why not:

When your old girlfriends
begin to die like
rushing rivulets of rain
disappearing down a sewage drain.

I don’t mean to give the impression with this selection that Powell’s poems are intended to be read only at stag parties, although it seems clear such would be a welcome venue for them. True, the evidence might point to a for-bubbas-only supposition, especially weighing in consideration the title of one of Powell’s three celebrated collections of short fiction: Lucky Bastard (for those of you who have yet to celebrate them personally the links here and directly above are to my reviews of the three: Getting Even and Beyond Redemption). 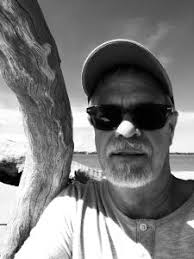 While it is true Powell’s poetic outlook is that of a man, a man with a man’s lifelines and hard-learned sense of humor, it’s also true he is a poet, and any poet worth his iambic pentameters can appreciate the feminine sensibility. Take for example, How to Make a Garden’s opening stanza:


Clear a space, a space in the sun,
of trees and bushes, vines and thorn,
as you might carve your torpid heart from
your chest and lift it into the light, so that the
hard-earned scars may heal, and it beats wild again

Till the space by hand, or with a power tiller,
if you’re able to bear the noise, turning the soil,
as you might cultivate your fallow mind to converse
with mountains, trees, and valleys, with fish of the sea,
birds of the sky, beasts of the land, and worms of the
earth.

Please do not mistake my offering How to Make a Garden as strictly a feminine poem. Neither Powell nor I are so simple. But prospective buyers of this chapbook might suspect gender exclusivity with titles like The Night the Condom Broke or When Wifey’s Away, the latter beginning with this couplet: I practice saying “I love you,”/so I won’t forget the words
Ultimately, I would suggest, if you have a sense of humor regardless of gender – birth or choice -- you will find a lot to like in Super Blood Wolf Moon. Why, gasp of gasps, it might even set you to howling once the day slides away making room for creatures of the nighttime sky.
Former Texas Poet Laureate Carol Coffee Reposa offers this about the collection, “I think it was Ethel Merman who said that we grow up the first time we have a good laugh — at ourselves. Most of all, these poems strike me as the work of a person who is absolutely committed to writing good poetry, and I feel honored to have had the opportunity to read his work.”
Back in my classroom, as I said up top, Super Blood Wolf Moon, had it been available back then, might have enabled me to do some actual teaching, i.e. turn these serious honor students onto what poetry is all about, that is, something deeply felt by the poet expressed in a way to arouse deep feelings in the reader -- and to hell with what that means or why.
Gadzooks...I almost forgot to mention Super Blood Wolf Moon won the 2020 Contemporary Poetry Chapbook Prize! Click the hyperlinked title at the top to pre-order your copy so you can celebrate these poems personally, in daylight or under a leering midnight moon…
...owooOOOOooo...

Take me home, said General James Mattoon Scott,
crisply,
ending the only movie the son saw tears
in the father’s eyes,
glistening in the incandescent light, tears
the father neither hid nor acknowledged.
Powerful, the father said, and the son agreed.

The father had always seemed remote
from the son and from himself. Feelings,
he would imply now and again –
never using the word – showed weakness.
The mind had to be strong to control them.
Comfort, he’d convey – never verbatim –
was dangerous indulgence, weakened the mind.

They last spoke, briefly, at a great distance,
father not recognizing son’s voice or name
yet the lawyer in him, polite, pretending he did.
He needed a favor, he said gently from the nursing home
he thought was a doctor’s office: Come get me.
Take me home.
m.d. paust
Posted by Mathew Paust at 4:34 PM 2 comments: