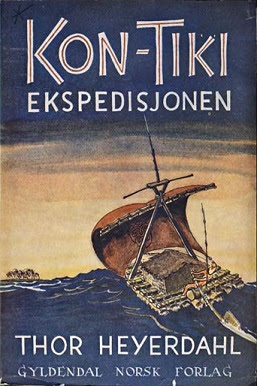 “Wow! What a book!” So shouted W. M. Krogman in the Chicago Sunday Tribune of Kon-Tiki, saying the aforementioned exclamation could easily comprise his entire review. But he went on anyway gushing, "It has spine chilling, nerve tingling, spirit-lifting adventure on every page and in every one of its 80 action photographs. It is the fiction of a Conrad or a Melville brought to reality. It might be added that the writing is of itself worthy of either pen.”
Krogman wasn't the only reviewer enthralled by the story of six Norsemen who sailed 4,300 miles on a balsa-wood raft from Peru to Polynesia. Heyerdahl's account won wide critical acclaim upon its publication in 1950 and went on to bestsellerdom, translations into more than five dozen languages, and the ultimate stamp of approval: inspiring an Oscar-nominated movie.
Today it's considered a classic. But its fate might have been oblivion outside Norway (where the first edition sold out in a couple of weeks) had William Styron's opinion held sway. The young manuscript reader at McGraw-Hill rejected the book presuming no one would want to read about six guys on a raft in the South Pacific. Fortunately Styron's counterpart at Simon & Schuster saw enough merit in Kon-Tiki to persuade senior editors there to take the risk, and they gambled. And, as we know, won big.
I'd be wondering if sheer luck hadn't been in play in the future classic's denial by a future Pulitzered novelist were it not for Styron's admittedly shitty attitude at McGraw-Hill. His “failure to project an appropriate work-man’s appearance and...slacking on the job” got him fired a couple months after being hired, which he fictionalized in his celebrated novel Sophie’s Choice further down the road. Else I’d be tempted to juxtapose the role of any of the gushing critics with that of the budding literary star, and guess then who would do the gush and who the flush—a fantasy that appeals to my cynical perception that despite its pretensions mainstream publishing’s all about the sizzle and to hell with the steak.
None of this mattered to me at the time as I shared Styron’s sense of Kon-Tiki, not at all intrigued by the prospect of reading the log of a long, lonesome sea adventure (I’d thought at the time it involved only Thor Heyerdahl, whom I assumed had to be more than a little nuts and probably a mediocre writer at best). It was a disinterest I carried for decades despite knowing of Styron’s embarrassment and the book’s ultimate wild success. I carried it right up until a couple of weeks ago when a friend who’s a regular visitor to Peru and student of its history and culture recommended Kon-Tiki in a way that Styron, had he actually read the book, should have recommended it to the editors at McGraw-Hill.
I am now in agreement with W. M. Krogman’s enthusiastic “Wow! What a book!” with the qualification, however, of substituting “story” for “book,” as I cannot agree with his assessment of the writing as rising to Melville’s or Conrad’s lyrical heights. Heyerdahl was a scientist. His writing is accomplished and engaging. But it’s his story that matters, that excites and astounds. He gives us in minute detail such a vivid depiction of six men with no seafaring experience—Heyerdahl couldn’t even swim—alone on a raft for 101 days at the mercy of the planet’s greatest ocean merely to prove a theory, that present-day Polynesians had done the very same thing a millennium earlier, led by Kon-Tiki, their chief, floating on balsa rafts from Peru into, for them, The Great Unknown. Heyerdahl’s story begins with his finding evidence of Peruvian culture during scientific study on a Polynesian island. It continues with his winning support for his dream of recreating the oceanic journey, gathering his five crew members and building and outfitting his raft to approximate as closely as possible the same conveyance used by the earlier Peruvians to flee their country and start a new life in another world.
In his foreword to the book’s 35th anniversary edition, he calls the 1947 launch of Kon-Tiki “the most decisive moment in my life, when I, a sworn landlubber with a fear of water deeper than to my neck, cut all ties to the land and steered out into the largest and deepest body of water on earth, into a strange adventure and an unknown future.” 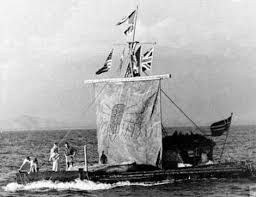 The Kon-Tiki’s bold journey, he said, “proved that a prehistoric voyage from South America was possible, contrary to the predictions of scientists and sailors. The South American balsa raft, which scholars had claimed would sink if it were not regularly dried out ashore, stayed buoyant as a cork. And Polynesia, held to be inaccessible for a watercraft from ancient America, proved to be well within the range of aboriginal voyagers from Peru.”
Here’s part of an entry to the daily logbook he kept during the crossing: May 17. Norwegian Independence Day. Heavy sea. Fair wind. I am cook today and found seven flying fish on deck, one squid on the cabin roof, and one unknown fish in Torstein’s sleeping bag...
He continues in the book, “If I turned left, I had an unimpeded view of a vast blue sea with hissing waves, rolling by close at hand in an endless pursuit of an ever retreating horizon. If I turned right, I saw the inside of a shadowy cabin in which a bearded individual was lying on his back reading Goethe with his bare toes carefully dug into the latticework in the low bamboo roof of the crazy little cabin that was our common home...
“Outside the cabin three other fellows were working in the roasting sun on the bamboo deck...” 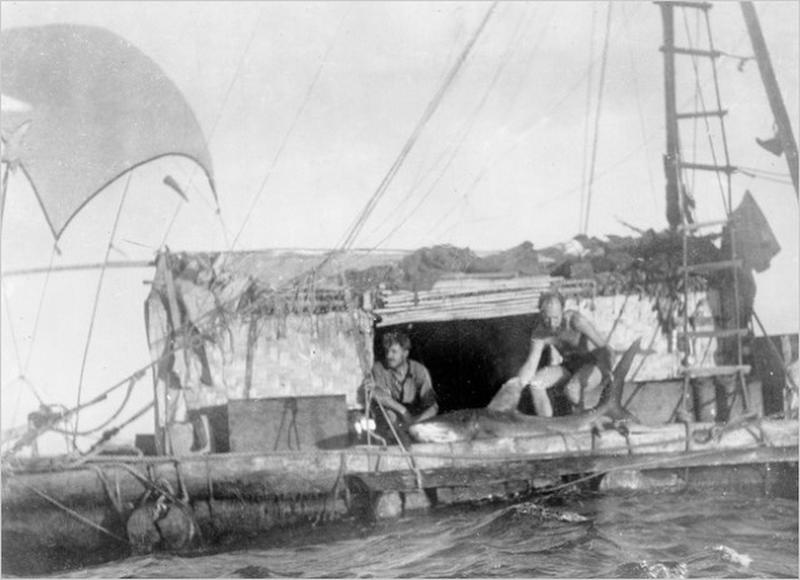 He had no trouble raising his crew. All five were enthusiastic volunteers when they learned of Heyerdahl’s quest. Getting financial support was another kettle of fish. “We could apply for a grant from some institution, but we could scarcely get one for a disputed theory; after all, that was just why we were going on the raft expedition. We soon found that neither press nor private promoters dared to put money into what they themselves and all the insurance companies regarded as a suicide voyage; but, if we came back safe and sound, it would be another matter.”
Help came finally in Washington, D.C. from the Norwegian military attaché, Col. Otto Munthe-Kaas. When he learned of their trouble raising funds, an early enthusiast of Heyerdahl’s proposal, he stepped up to the plate.
“You’re in a fix, boys,” he said. “Here’s a check to begin with. You can return it when you come back from the South Sea islands.”
I grew up in a town named after the man I’d learned in school represented the epitome of heroic adventure, the man who “sailed the ocean blue” in either the Nina, the Pinta, or the Santa Maria. Later on I added “Lucky Lindy,” who flew the ocean blue in the Spirit of St. Louis. Over the past two weeks I discovered six more heroic adventurers—each more adventurous, I might add, than the first two put together.
Wow! What a story! 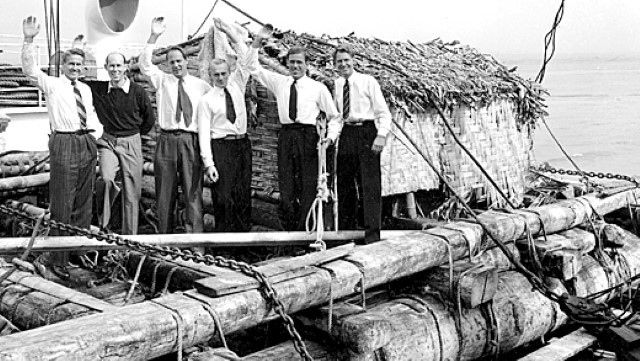