ALL THAT I HAVE – Castle Freeman Jr. 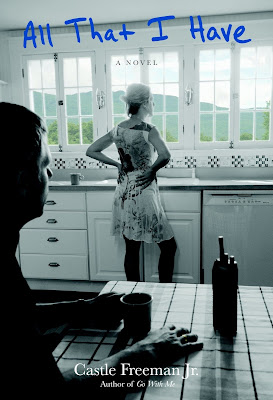 There are so many things I like about this little novel, All That I Have, I'm struggling with how to prioritize them. The general categories are humor, philosophy, mystery, voice (maybe that should be first), bad guys, evil Russians, and a county sheriff in Vermont who doesn't tell us the name of his county, doesn't wear a uniform or carry a gun, and who philosophizes more than Hamlet and Plato put together. That last is a slight exaggeration used for emphasis.


The only thing slowing me a little at first was Sheriff Lucian Wing's rural (I presume) Vermont dialect. Ordinarily I find prolonged written dialect tedious. I was afraid this would be the case with All That I Have, but I very quickly came to adore it. Maybe because it went so well with Wing's droll sense of humor and half-earnest attempts to understand and justify how to do his job, which he calls "sheriffing."


Here he is explaining what sheriffing is by using the example of his overeager, ambitious young deputy's approach to solving a burglary he presumes was done by a likely suspect: "He says that because he knew right off who it was broke into the Russians’ house, and he thinks if he knows who did the deed, and he takes them in, his job is done. But his job is sheriffing, and that ain't sheriffing. That's car repair. A car won't start, you say, Well, maybe the alternator's shot. You test it out. It don't work. You pull the old alternator, throw it away, put in a new one from the parts store, and you're done. Sheriffing's different. You can't do it with spare parts. It's a whole thing you're working on. It's a whole thing you have to keep going."


Wing learned from his former boss, the now retired, longtime Sheriff Ripley Wingate, whose bedrock philosophy was to be visible but appear laid back, to wait and watch until the solution to a problem manifests itself, then act on it. That's not how either of them would put it, however. Here's how Wing puts it: Wingate "ran a kind of—what is it where everybody sits around and asks questions and nobody ever answers them? A seminar. Wingate ran a kind of a seminar on sheriffing. The end was always the same: do your job."


One last Wing analogy before we get to the job at hand: "Sheriffing is like being the bouncer at the Ladies’ Aid lunch," he tells us. "When things are going normally, they don't work you too hard."


The "hard work" at the moment involves the Russian gangsters who own the burgled mansion and are intent on recovering a portable safe taken in the burglary they assume was done by the local likely suspect who'd been working on a construction job at the mansion. The gangsters send one of their thugs to get it back. Sheriff Wing learns of this after being called at breakfast (where his wife was turning her back on him because of a quarrel the previous night, which left Wing sleeping on the couch again) by a state trooper reporting a badly beaten nude man tied to a tree. The trooper says the man is speaking a strange language. The wife, by the way, hearing the call on her husband's "squawker," thinks the trooper said "new" man, which leads to a new argument between them about what is a "new" man, as Wing, who tells her he is a new man, heads out the door to meet the trooper.


At the scene, Wing tells the trooper the language is Russian. Wing doesn't say it might be Russian, he says it is Russian, and the trooper, naturally, demurs. Wing then confides in us: "Do I know Russian? I do not, no more than Trooper Timberlake does. ‘Course I don't. With my crack about how he hadn't been trained right and I had, I was taking a little shot at Timberlake. I was sticking it to him, a little. Sure, I was. With the Timberlakes of this world, you almost have to stick it to them when you can, don't you? Timberlake don't mind. He's—what are you when you're padded all around, when they can't get to you? He's invulnerable. Taking a little shot at Timberlake is like shooting an elephant in the hindquarters with a BB gun: not only is he not hurt, you can't tell for sure whether he knows he's been hit."


Any wonder yet why I like this book and will probly read the others by Castle Freeman Jr.? Despite the country dialect, and the lack of chase scenes, gunfights, fistfights and the like, which there are—lack of, that is? Might it be because Lucian Wing is a hoot? Well...course it is. Large part, anyway. Large part. It's short, too, by the way. The novel.


So what is it with these mysterious Russians, who own the fanciest, mansion in the county but are never there? Except when they come to try to get their safe back (which someone tells Sheriff Wing contains documents presumably vital to the criminal organization. Back in the wings I'm shouting—out loud because I read this on Sunday when the hair salon I share a building with was closed--"GO TO THE FEDS!! WE KNOW THE USUAL SUSPECT HAS THE SAFE AND CAN'T GET IT OPEN AND WILL PROBLY BE KILLED BY THE RUSSIANS! SEND A THOUSAND FBI AGENTS TO GET THE DAMNED THING...etc. etc."


But this is not how Sheriff Wing operates. He wants to get rid of the Russians, of course, but he does not want his sleepy, friendly little tight-lipped Vermont county invaded by federal agents, either. Just don't go thinking he's soft on the Russians! I mean, here's what he tells us about them: "They're a gifted people, the Russians, but they do nothing by halves. And also, of course, they're all quite mad. The Russians, don't you know, have a claim to be the fourth-craziest people on earth, after ourselves, the Japanese, and the French—and I'm not sure they might not have the edge of the French, in an impartial trial."


I don't consider what I'm about to tell you to be a spoiler. Nosirree Bob's your uncle, or whatever. Because by now you know Sheriff Wing is a hoot, and you know if he wants to get rid of the Russians he will (and you'll recall I've already told you the only physical violence in this novel, that I recall, was a severe beating off-page of the nude Russian—oops, I just remembered another beating, also off-page, of the ambitious young deputy, by the Russians). He does. Wing gets rid of the Russians. I'm telling you this, so you won't be expecting any trumped-up fake suspense. There is none, but Wing gets rid of the damned Russians!


You might also wish to know if Wing's wife ever catches on that despite her husband's claim to being a "new" man the word she heard the trooper say on the squawker was not "new." I'll leave that for you to learn yourself. I will say, tho, he does sleep on the couch again, later on. But I wouldn't read too much into that. Not with a hoot like Wing.

In case you're finding this "review" on par with Wing's unusual, lazy-appearing attitude toward sheriffing—he says his predecessor's rule was "Don't be lazy, but it's okay to look lazy," I'm giving you a link to a conventional review so you can decide if this one is the literary interpretation of Wing's philosophy or whether it's just plain lazy. Here's the link (it's such a good review it intimidated me, which is why I did mine like I did): Vulpes Libres