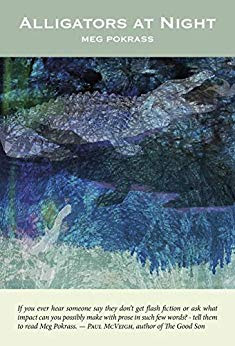 The advent of flash fiction has been a godsend for that part of me that prefers the kill to chasing a quicksilver fox, the visceral capture that eludes the academy poet.


At first thought one might think short is simple and simple is easy, and this may be so for some. Even many. But, as in most art forms, the occasional genius brings surprise to the party. Brilliance that beacons through eons of comfortable fog and expectation.


Such is Alligators at Night, a collection of seventy-two quickies that pierce the heart and the funnybone—sometimes within a word or two, sometimes in the title alone. Meg Pokrass is celebrated among her flash-fiction peers for her deft hand arousing glee in the darkness and sober reflection before laughter’s quite finished its happy sputter.


“You have not yet cried or threatened to leave,” we learn in the title story, “and you have not yet been quieted by your husband with his body half-asleep and given up the fight.”


But that comes soon after the opening, when she explains the odd title, when life seemed fine, its quirky behavior carrying a tender poignancy:


You remember when you lived in Florida briefly, walking to the store with your husband in the middle of the night. You remember the sound of alligators crooning like deranged, nocturnal cows, all the way to the Seven-Eleven, from each side of the highway. You remember thinking that they must regularly sing to people on their way to the Seven-Eleven— mostly a welcome sound, because there is a three-hour walk there, and a three hour walk home, and the night sky is so velvety in the summer, and the singing alligators are like jazz. It’s like you’re in a jazz club, but walking, outside.


Funny title? How about Dismount? I guess that depends on connotation. Is the story funny? It gives sequin flashes of mirth, but then this line: “She imagined heaven an aquamarine deep swimming pool where she could cry underwater and nobody would know.”


The instantaneous back and forth between twinkle and anguish give Pokrass a dangerous edge, like a cat purring when its belly’s scratched switching in a blink to jungle mode, all teeth and claws. A lightness of style pulls us into a queenly Dorothy Parker mind where nothing ameliorates the keenest and meanest of observations. Her delivery is sly, indirect, and her cuts frequently self-inflict. In Cutlery she tells us her lover has an obsession with kitchen knives. “We were each part of an intricate and delicate habitat, and we had our own ways of surviving. He had his butter knives. I had my fantasies of finding a man who would find me.” Ouch. 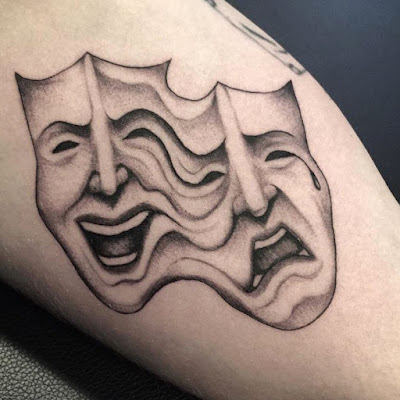 Her wit is not all she displays in these jewels from a mind you sense lets nothing get past, that once caught by her perception it’s a permanent acquisition. These sparks of insight and wonder are grist for the mill of an accomplished wordsmith, bubbling from a vast and deep memory seemingly on a whim into carefully wrought, playful sentences that showcase them with dazzle and shimmer. “He slices a sleepy-bear smile my way,” she reveals in The Landlord, “and my mouth stretches sideways and upward like a circus trick.”


“Johan is looking at me with a smile that stretches around his smile lines,” we learn in Probably I’ll Marry You. “He has a cute, rat-like face. Rats are very intelligent animals.”


Some of you may be curious about length. Just how long are these “flash” stories? Am I misleading you with fetching quotes? Luring you into a collection of ponderous stories so long you have to break from an engaging narrative to pee or get another beer or glass of wine, and then be distracted by something else, and when finally you get back to the story you’ve forgotten what in hell it’s about? Would you like an example of a typical story right here, right now? Can I give you one without violating the copyright rigidities designed to protect author and publisher from pirating? Well, dammit, I’m no pirate, and if Meg Pokrass can be daringly whimsical, so can I. Here’s an entire story from the collection Alligators at Night:


I stand near the boiling stockpot warming my fingers while the chicken and vegetables melt, the smell making our apartment strong. Canned wind howls from the TV screen in the living room, emitting a cool glow. He loves man-against-nature shows which are actually a buff-looking male model talking to himself (and his hidden film crew) before lunch which is probably catered sushi. I serve him the fresh broth on a lockable tray, move his legs from couch to the floor, bend my knees to avoid using my back. He drinks soup with a special deep spoon— and though his fingers tremble, they are able to grasp. I sit with him, cheek against his warm shoulder, watching the man trapped between two icy mountain ranges build a fire out of sticks.


Do you trust me now? An entire story you just read in the time it took your heart to beat, what, ten, fifteen times? Three or four natural breaths. Even if you had to pee like a racehorse you could have made it through this amazing piece before trotting off to the throne. And then remembered it when you got back. Irony? O lort, I believe I failed to mention irony up above, but in this piece alone, in Man Against Nature, there’s enough irony to put Olympic zip into the most anemic reader (metaphorically speaking, of course). I don’t believe Pokrass can write more than five or six words in sequence without slipping in an ironic twist or three. And some of the other concepts de rigueur among the popular literati—subtext, layers, nuance, resonance, MFA approved, etc. It’s all there. All of it, packaged in hot little bundles of blinding brilliance.

What’s that? You want another taste? A little encore of sorts? Well, I can’t say I blame you. Okay, so here’s another line from Probably I’ll Marry You: “My ex-husband was a workhorse, never lost a job. Kept his pants real nice. Had a Grecian nose. The woman my husband left me for has a piggish, squashed-in nose. I have two arms, and my nose is terrific.”


The link at the bottom is to a collective blogging feature called Friday’s Forgotten Books. I put the link there because this essay is my contribution for this week. Alligators at Night is not a forgotten book. It came out last year, but I’m including it as an introduction to readers for whom flash fiction is so new a concept it could easily be overlooked in favor of more traditional fiction forms. I don’t want to have to come back here in ten years or so and treat Alligators at Night as a bonafide forgotten book. Please don’t let that happen!