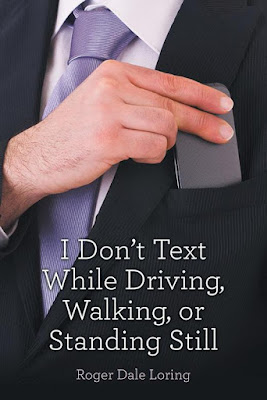 Roger Loring's genius in writing essays that provoke continual knowing grins combined with constant affirmative nods of head and occasional irreverant vocal bursts is matched only by his market-savvy title selection. That last, the market-savvy thing, applies only to the two collections of his provocative essays. For his first collection he chose the title of one of his essays to lead the pack that would most certainly attract both men and women: Why Men Don’t Ask for Directions. I needn't explain, need I? Okay, I will, but by simply asking you to picture the heads of every woman you know nodding vigorously as their voices utter sounds like "oh yeah" and "ego" and "so what excuse is this guy gonna give?" etc. They bought a copy, read enough of it to feel good about themselves and the men they know, and bought more copies for the men. Men bought it to see what kind of lame-ass excuse this Loring guy had for something all men have done naturally for ever because they are men. And they, too, laughed, read all of the essays, and felt good about themselves.


Now comes Loring's second collection, which I've just finished reading—grinning, laughing, nodding, etc.--and now feel good, not necessarily just about myself, but good. Again, Loring picked the perfect cross-gendered title from among the more than two dozen available essay titles, and this one also has a generational attraction. From a marketing point of view, I cannot in my wildest imagination picture a woman or man born within a few years after World War II, now dubbed "Baby Boomers," not grinning and nodding affirmatively when seeing on the cover of a book, I Don't Text While Driving, Walking, or Standing Still. Full disclosure: I sure as hell did! And I didn't have to hunt down the table of contents to find the eponymous essay. It sits right at the top. I read it, but I didn't have to to be able to divine the answer to the implied question, which has nothing to do with safety or a preference for hearing voices to reading esoteric symbols on a tiny screen. The correct answer is that Roger Loring hasn't learned how to text, and has no desire to do so. Moreover, he doesn't own a "smart phone" and has no desire to upgrade from his "flip" phone because all he wants a cell phone for is to "make phone calls!"


Loring continues in this essay to confess that he's so unskilled vis a vis the digitalized information superhighway "I am still stuck in my garage, because I haven’t figured out how to work the remote control for my automatic garage door opener."


Now, youngsters (younger than the Boomer generation) who find this book lying on a coffee table or in the waiting area of the garage while their vehicle's being inspected might feel their lips curl into a smirk or even a sneer at the title. Here's what Loring, who optimistically believes they might pick the book up and start reading, advises in his introduction to I Don't Text: "I...hope younger folks—the Gen X and millennial crowds—will read the book with an open mind, which was the opposite of my mind when I was their age."


The more I think about it, I Don't Text is indeed the perfect marketing title compared with the other couple dozen or so heading the essays precisely because it reaches out, with a certain perverse reverse psychology, to those youngsters who still read books when not forced to do so for school. Consider some of the other titles: The Difference Between Men and Women. Can you imagine any youngsters old enough or bold enough to watch "adult" TV shows and movies featuring interaction between the principle genders not believing they know everything there is to know about le difference? To be seen reading a book with that title would subject them to shaming condescension from their peers, whose dismayed faces would tacitly diss them with, "Like, you don't already know, dude?" [Disclosure: I learned some things, and I also know attitudes of political correctness would best be suspended in the interest of enjoying the satiric ironies Loring dishes out, tongue planted firmly in cheek while composing the piece, no doubt.]


Or this one: The Hardest Part-Time Job in America. I mean, what kid would feel compelled to dare to open the cover of a book that promised to remind him or her, or some hybrid combination of the two, that one day, probably sooner than later, they would have to consider actually finding a job? Any job? But you Boomers most likely do want to know which part-time job is the hardest in America. Right now that's for me to know...you know the rest. [Click the boldface title at the top of the page, which will link you to Loring's Amazon.com author's page, if you wish to buy the book and find out. For those of you digitally challenged Boomers not completely comfortable with the scrolling thingy, here's the link again: RogerLoring's Amazon.com author's page.


Now, the essays in this book cover a wide range of topics and offer opinions gained from decades of wisdom-rending experience, many of them spent spent on golf courses, watching sports on TV, and teaching high school yout's in Gloucester, Virginia. Did I just write "yout's?" Yeah, yout's. [Apologies. My Cousin Vinnie is one of my alltime favorite movies, next to Holmes & Watson and The Big Lebowski, and I know this isn't about me, and I don't how that happened to slip out like that but I'm wondering if maybe I Don't Text's outrageous essays didn't somehow open up a door in my psyche better left closed at a time like this, but...okay, I'm done.] One of I Don't Text's most gut-splitting-hilarious essays is on the clichés used by TV announcers covering sports. After giving us pages of examples he combines many of the worst lines into this one compact paragraph:


I am bothered by sports clichés used on TV broadcasts, but I’m not exactly sure what to do about it. The fact of the matter is that the ball is in my court. Instead of just complaining, I need to step up to the plate. I have a great work ethic, so I need to generate some offense, because I know what it takes to win. I need to give 110 percent. I’ll leave it all on the field, because it is clearly time to play hardball. At the end of the day, I should just take one game at a time and then—turn down the volume! Okay, I used a few clichés there, but turning down the volume does seem to be the best solution.


And then there's golf. Golf, I'm pretty sure, is the main reason Roger Loring wrote this book. Golf is a serious matter with Roger, and his essay on it, while giving us some of his usual thigh-thumping insights, also some serious—deadly serious, as other serious golfers might agree (I'm not one)--complaints. But first, I must note that I Don't Text also contains some poetry. Here is one of several shorties known as haikus:


up in the gray sky

Now then, back to golf. The title of this essay signals its theme, and it's not a pretty one: I’m Gonna Tell. What really irks him [I've finally just now fulfilled a lifelong dream of being able to write the word "irk" in a sentence. Sorry again. No more interruptions!], what really irks Roger Loring is knowing that many many people who watch golfing tournaments on TV are more interested in catching the pros violate one of the game's myriad rules than in admiring the brilliance of their golfing skills. "These people apparently are willing to devote hours and hours of their time—it takes a professional golfer between five and six hours to complete a round—just to be the person who happens to catch a pro illegally ground his or her club in a sand trap or possibly take an illegal drop after declaring an unplayable lie...'I think his ball moved on his downswing! He better give himself a penalty! I’m gonna tell!'” And tell they do, he says, noting that the PGA not only accepts calls from these couch-potato snitches, they have a special number to receive the snitching. 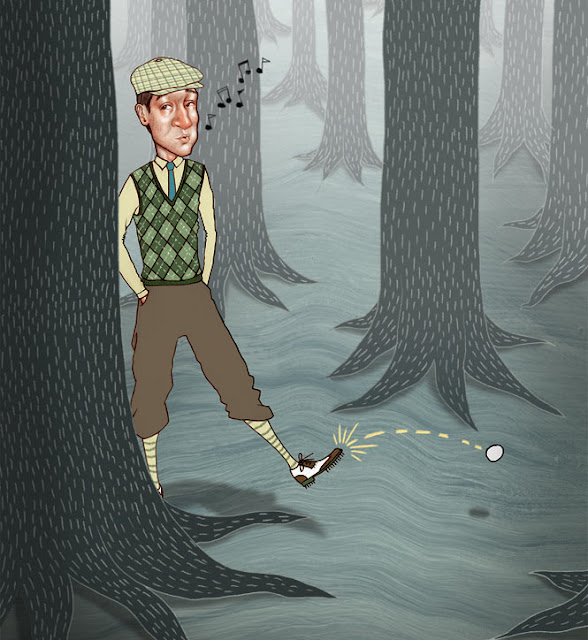 "It never would have occurred to me that the number for the PGA Office of Squealers and Busybodies Reporting Possible Rules Infractions would be on anyone’s speed dial, or better yet, that such an office even existed," he grumbles.


Loring cites two reasons for this: there are way too many rules, and because there aren't enough officials monitoring the tournaments and, because pro golfers are presumed to be honorable, the players are expected to report their own infractions. His advice: "The PGA needs to bring this [snitching] to an abrupt halt. Just let the golfers play the game as brilliantly as most of the pros do, and let the 'I’m gonna tell' folks go outside and play with the kids in the neighborhood. If someone misbehaves there, then they can go inside and tattle to their heart’s content."


I haven't played golf in years, in part because I was a lousy golfer. I probly even cheated a time or two and certainly lost my temper and broke a club or two. I have no desire to return to the links--ever again, but I agree with Roger, this snitching bullshit has got to be stopped!