THE LIGHT OF DAY – Eric Ambler 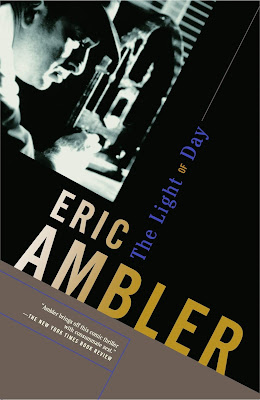 I downloaded Eric Ambler's The Light of Day because in perusing the list of Amblers on Kindle I saw that the 1962 film Topkapi was based on Light of Day. Not sure I've ever seen Topkapi, but I remember when it came out, about a year before I joined the Army. If I saw it back then I might have been too drunk to remember much more than that it involved a group of professional jewel thieves stealing priceless jewells from a museum in Turkey. But that vague recollection—if you could even call it that—was enuf to persuade me to make Light of Day my first Ambler. It won't be the last, either.
Not sure why I'd never read Ambler before. I was familiar with the name, and some of the titles, and might have seen a movie or two based on his novels. What steered me to the Kindle Bookstore last week was reading Elgin Bleeker's review of The Mask of Dimitrios (also known as A Coffin for Dimitrios), which rang some familiar bells—again because of a movie, this one starring two of my favorite noir actors, Peter Lorre and Sydney Greenstreet. Elgin's review of the novel can be found on his blog The Dark Time.
I'll concede up front I didn't think I was going to like Light of Day, because I didn't think I was going to like the narrator--Arthur Abdel Simpson, born of an Egyptian mother and British officer father. A petty hustler of tourists, he struck me as one of the reasons I've always felt uncomfortably wary traveling. The sort of character Peter Lorre would play in his smarmy, sneaky, larcenous way (Peter Ustinov played Simpson in the film, which should have rendered the character a tad more likeable).
It was Simpson’s honesty about himself and his situational ethics, and his quick and disarming gift of gab, that quickly hooked me solidly. I had to know how he’d get out of the damned mess he got himself into with the tourist he sold his guide/chauffeur’s services to, who catches him in his room trying to steal some travelers checks. The tourist, whom we know as “Harper,” turns out to be a bigger hustler than Simpson, blackmailing him into driving a Lincoln Continental from Greece to Turkey for a woman who would meet him there. Harper would join them later in Istanbul. As we can most certainly surmise, from the oddness of this arrangement and from Simpson’s comment on his own misgivings, shortcomings, and tactical blunders, the plot has nowhere to go but to thicken.
And, of course, it does, it thickens to the consistency of wet cement when Turkish customs officials find guns and grenades hidden in the Lincoln’s doors. Simpson faces a long prison term, or worse, unless he agrees to play along with Turkish counter-espionage officials who want him to find out what the weapons are intended for. They suspect a plot against the Turkish government. Simpson suspects a heroin smuggling operation. Either way, he has no choice but to play along. Turkish security agents follow the Lincoln all of the way to Istanbul and keep a constant surveillance of Simpson and his eventual several nefarious colleagues, while Simpson must report regularly to the security people everything he can learn about whatever plot this strange group has in mind.
Of course there are many close calls for Simpson, whom, by now, I’m identifying with so closely I actually cringed and blew out some of my own breath to see if I could tell if it stinks after the poor schmuck (schlemiel? dork?) overhears some of the plotters talking about him. “Even Arthur could do the rest of that job,” says the attractive woman in the group, and laughs. “The indignant sheep? With his breath you wouldn’t even need the grenades, I guess. You’d get a mass surrender.”

The sting stays, and he mentions it in a little soliloquy at the end, which eased my own insecurities a tad as well, as my identification with him—as I most often do with fictional narrators and protagonists—began disengaging: “I am not asking to be loved. I am not asking to be liked. I do not mind being loathed, if that will make some pettifogging government official happier. It is a matter of principle. If necessary, I shall take my case to the United Nations. They caned the British after Suez; they can cane them again for me. Sheep I may be; and perhaps certain persons find my breath displeasing; but I am no longer merely indignant. I am angry now. I give the British Government fair warning. I refuse to go on being an anomaly. Is that quite clear? I refuse!”
Not exactly my hero, but I can kinda see where that is coming from.
Now, please don’t see that little rant, which concludes the novel, is a plot spoiler. We know from the get-go Simpson’s going to get out of whatever happens alive and able to tell his story. What you don’t know, altho you’ve probly guessed by now, is just what this motley bunch is plotting. Well...I’m not going to be coy here, as there really is no doubt that most if not all of you have guessed correctly that these criminals are going to try to steal a significant fortune in jewels from the historic Turkish Topkapi Palace, also known as the Seraglio. And once we know what’s up with that, the plot segues from Simpson’s guesswork into the tactical planning and execution of the theft. This is where Eric Ambler’s reputation for authenticity shines like a harvest moon. His descriptions of the palace and its history, as relayed to us thru Simpson (who’s worked there as a guide) are so detailed and fascinating I felt a stirring somewhere in my aging loins to venture out once again to a foreign country, risking being fleeced by a Simpson-like scalawag, just to see the place for myself.

And the theft itself is chock full of harrowing suspense, which, at one point, is so harrowing Simpson, who’s helping the thieves, becomes ill and nearly passes out from acrophobia…
OK, that I suffer from acrophobia myself, and what with my identifying with Simpson and being completely caught up in the nerve-twanging thrills entailed in the potentials of catastrophic failure versus ecstatic success, and a general dread of bad breath, I...o lort...I...I just...I can’t go on...
[Find more Friday's Forgotten Books links at Todd Mason's amazingly eclectic blog]
]