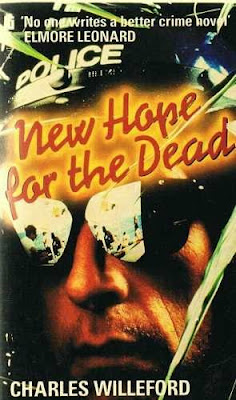 Were Hoke Moseley a cop in the rural South it could be said of him, Thet boy’s inna heapa trouble, son (the “son” thrown in just for its sound). The list of his troubles is so long I’m liable to forget one or two, or more, but I’ll start with the most obvious: he’s a homicide sergeant in Miami living in a dump hotel outside his department’s jurisdiction. As he tells his two teenage daughters, who’ve dropped in unexpectedly on him (another of his troubles), “South Beach is now a slum, and it’s a high-crime area, so I don’t want you girls to leave the hotel by yourselves. If you had a doll, and you left it out overnight on the front porch of the hotel, it would probably be raped when you found it in the morning.”
He has two weeks to find a permanent domicile within the jurisdiction, or risk losing his job. Problems three and four are directly related in a cause/effect way. He’s living in the dump hotel because he has to send every other monthly paycheck to his ex, which doesn’t leave him enough to afford a place in the city. The daughters’ arrival removes the initial financial burden of the divorce, but now he must find a place suitable for himself and the girls and Ellita Sanchez, his new unmarried Cuban partner whose father has kicked her out of the family home after learning she was pregnant (not by Hoke—he’s smarter than that). And let us not forget, Hoke and Sanchez and his former partner, Bill Henderson, have murders to solve. Lots of them.
Most immediately for Hoke and Ellita is the death of a young junkie of an apparent overdose of high-quality heroin. Hoke suspects foul play, however, plus he’s taken with the junkie’s attractive and flirtatious stepmother. While probing into the death, and weighing the fact he hasn’t had sex in four months, he cautiously proceeds to woo the woman. Meanwhile, there are fifty cold homicides the trio has been given two months to solve. Take a moment, please, to absorb the implications of this phenomenon. 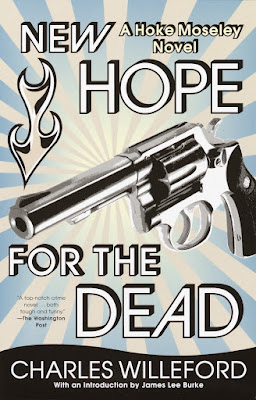 Fifty cold cases (providing the novel’s title, New Hope for the Dead). The case files were compiled by Major Willie Brownley, who hopes cracking a few of these old murders will help elevate him to one of eight colonelcies the new police chief says he wants to create in lieu of pay increases. One might think Brownley’s a stereotypical administrative jerk for harboring this ambition, but he’s really a pretty good boss. He’s the department’s first black major, and he figures this could be his last chance for higher rank before retirement. “I didn’t become the Homicide chief because I was a detective,” he tells them, after assuring them he trusts their judgment as to which of the old cases they have the best chance of solving. “I’m an administrator, and I was promoted for my administrative ability. It didn’t hurt that I was black, either, but I wouldn’t have kept my rank if I couldn’t do the work.
“It seems to me, if we can solve some of these cold cases, it’ll make our division and the entire department look even better than it is. And if that happens, they’ll have to make at least one of those new colonels a black man. What I want is one of those silver eagles and another gold stripe on my sleeve.”
The team gets off to a great start, making progress on two of the cases within a couple days. The first, when Henderson on his way to lunch spots the suspect known as Capt. Midnight. The second when Sanchez interviews a woman who claimed to have seen a girl whose bloody clothing was found in a field some three years earlier. The witness had changed her story with the male detective trying to interview her at the time, and was written off as a “man hater.”
This is the second of the Hoke Moseley series I’ve read. I’m hoping to read the rest of them in sequence. I am totally hooked on the character and on author Charles Willeford’s droll, yet realistic voice. I was enormously impressed by Willeford in my review of the first in the series, Miami Blues, and see no need to restate the kudos here, although I can quote a line or two from novelist James Lee Burke’s introduction to New Hope for the Dead. The two became friends while teaching at Miami-Dade Community College:
“Early on I became aware of his tremendous sense of humor, his wit, and his ability to tell wonderful stories. But as I came to know Charles better, I also began to realize his great reservoir of humanity, his goodwill, his loyalty to his friends, and his modesty as a man, an artist, and a decorated soldier.
“He was one of the most extraordinary men I ever knew. He literally lived history. He rode the rods when he was fifteen, lived in hobo jungles, boxed as a club fighter, fought roosters, raised horses, enlisted in the cavalry when he was sixteen, drove a tank in the worst battles of the Bulge, won the Croix de Guerre, the Purple Heart, and the Silver Star.”
I would be remiss not to add this line from the New York Times Review of Books: “If you are looking for a master’s insight into the humid decadence of South Florida and its polyglot tribes, nobody does that as well as Mr. Willeford.” After two novels now, and this, I’ve no desire to visit any part of Miami. Ever.
What I find most seductive about Willeford’s writing is his attention to detail. I don’t mean the kind of monotonous descriptions of furniture and buildings and landscapes and clothing and such that seems de rigueur for novelists these days, following the common dictum that it’s holier to show than merely to tell. Not saying Willeford skimps on these details. Not at all. I definitely felt I’d been plunged into “the humid decadence of South Florida and its polyglot tribes.” Even turned on the A/C in my apartment in case some of that South Florida mugginess happened to migrate north while I was reading about it. Nope. There’s enough of that de rigueur detail in the two Hoke Moseley adventures I’ve read thus far, enough to stimulate my imagination to fill in the blanks. What I mean by “seductive” detail, is his depiction of the ordinary things his characters do that most novelists glide over in the interest, I suppose, of keeping up a narrative tempo. The kind of pace The Village Voice says is “so relentless, words practically fly off the page.” I’d say that’s a tad over the top. The words don’t “fly,” but they move along without getting bogged down in literary correctness. Here’s an example that doesn’t seem like much, but left my jaw agape:
The waiter brought the conch chowder and the oysters on a tray. He also gave them silverware, wrapped in paper napkins. He placed Loretta’s wine spritzer in front of her. Hoke poured the last of the beer into his glass and topped it off with a head from the fresh pitcher. The waiter put the empty pitcher on his tray.
This comes during one of the most suspenseful scenes in the novel. It’s a perfect glance away from the building tension, focusing on the simple mechanics of service in a restaurant. We’re not distracted by the brand of beer or wine spritzer or how the waiter is dressed or looked. Non-essentials, those. It’s the way I imagine Hemingway might have portrayed the little scene, with us knowing all the while the deadly potential lurking nearby, perhaps only seconds away. “The waiter put the empty pitcher on his tray.” A cinematic moment. Extreme closeup on the pitcher, the waiter’s hand, and then the tray. All the while the tick tick tick of something we know is coming.
Genius, I would say. But maybe I’m just easy.