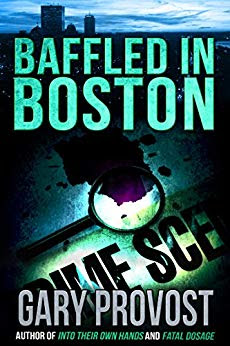 Baffled in Boston was my prize for slogging through two rather awful—one really rather awful—melodramatic crime/romance novels by Stephen Humphrey Bogart, scion of Hollywood's most iconic lovebirds. Besides alliteration, the only Bogie/Bacall/Baffled link I found in my several-day read-a-thon was the late Gary Provost, author of Baffled and presumed ghost-writer of Play It Again and The Remake: As Time Goes By, both titles alluding to an unforgettable scene in Bogie's classic film, Casablanca. Provost was a novelist, author of true-crime and how-to-write books, and a popular writing coach whom Stephen Bogart credits with assisting in the memoir Bogart: In Search of My Father, published in 1995. It was the same year Provost died, and the same year Play It Again came out—with only Bogart’s name on the cover. As Time Goes By followed two years later.
My plan was to compare Stephen Bogart's two novels with one of Provost's for clues that Bogart's were ghosted or that maybe he had some less visible help with his fiction, at least with the first novel. My conclusion: There's no chance Provost or likely any other pro wrote these novels. They're too green. Dialogue stiff and overdone, and way too much telling instead of showing. Frantic sex scenes like those in pulp magazines of the ‘50s. The kind of callow crap youngsters of my ilk were reading and trying to imitate back then. On the positive side, I have a hunch Provost helped plot and shape Play It Again. The technique is not new, but it’s an effective suspense builder—italicized sections from the serial killer's POV giving us insight "RJ Brooks," the PI protagonist, doesn't have. The first murder victim is RJ’s mother, the world-famous movie queen obviously meant to be Stephen Bogart’s mother, Lauren Bacall. His father, whom we know was Humphrey Bogart, who died when Stephen was eight, appears only in memories of characters who see and hear him in the spitting-image face and voice of his son. Essentially it seems Stephen Bogart simply changed names and added fictional circumstances for the novels. 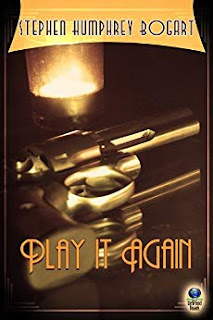 Same basic cast and same craft flaws for RJ’s later adventure, but with a silly, meandering plot and a nauseating romance between RJ and a TV producer that began in the first novel and curdles into soap-opera melodrama in The Remake. I did get one hearty laugh the author most likely did not anticipate. The serial murderer is one of several characters, including RJ, who vehemently oppose the tawdry remaking of Casablanca (called As Time Goes By in the novel). RJ is horrified that the lead characters will be a brainless musclebound actor noted for playing a lifeguard on TV, paired with a porn star known mostly for roles she’s played nude on her back. RJ spouts sentimental outrage that the memories of his father and mother, who starred in the original movie, would be outrageously cheapened by this ripoff.
He’s a leading suspect in the murders, of course, which means it’s pretty much up to him to find the real murderer. One of the suspects puts out a Hollywood-insider magazine, where he has displayed his murderous rage in print. “‘As Time Goes By means something, Brooks.’ the wheelchair-bound editor tells RJ. ‘Something special, pure, good. Not just to me, but to all of us, our whole culture. Millions of people, all around the world. Because it stood for something. It was a rallying cry for the last great moral battleground—and the good guys won. It was important, goddammit—maybe one of five or six movies in history that are really important.’ 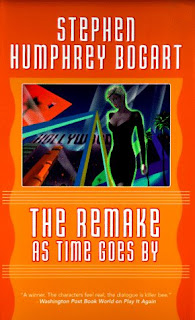 “He slapped his hand on the tray. It was a feeble slap, but if the intention behind it counted for anything, it would have brought the building down. ‘And now those goddamned soulless leeches want to sodomize it! Like putting a Nike swoosh on the Pieta, for Christ’s sake! Can’t anybody else see that? See that it’s wrong, beyond wrong, it’s actually EVIL!’”

Okay, Casablanca did win three Oscars, including best picture, but...
My out-loud laugh came before I reached the editor’s tirade, as I tried to imagine sultry sassy Bacall doing Ingrid Bergman’s peerless scorching of Bogie’s cynical heart, quietly wooing Dooley Wilson to “Play it, Sam. Play As Time Goes By.” Bacall would’ve been sitting on the piano, her husky voice caressing the words, shapely leg swinging, and laughing eyes batting at a Bogie so newly smitten he’d have pushed a peanut across the floor with his nose to prove how forgiving he was of whatever little misunderstanding they’d had...when? Paris? Oh hahaha...ce n'est rien ! 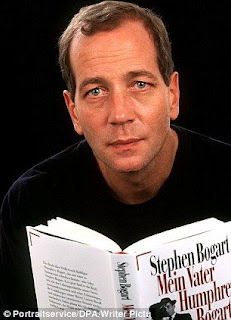 RJ in both novels can’t settle on being a tough guy or melting at the thought of Casey Wingate, who treats him like a stooge except when she suddenly starts tearing his clothes off and biting his neck. Here he is in the second novel, giving us his Bogie sneer: “He liked the fact that all New Yorkers are predators. It was why he lived here. He’d grown up with the sun-tanned, veggie-loving mood-ring kissers on the West Coast, and he would just as soon take the knife in the front, New York style.” Okay, sounds like something the old man might have said in a movie. Moments later, though, he’s begrudging media crews trying to take advantage of his bloodline and resemblance to his famous dad: “Wouldn’t say anything to anybody with a press pass. Except Casey Wingate, of course. Casey. He sighed just thinking about her.” What? Sighing? A Bogart male? Oh dear. Well, we can safely assume if anyone helped Stephen Bogart with this book it sure as shootin’ wasn’t Norman Mailer.
Now then I could see Mailer lending a line or two to the first one, Play It Sam, such as the following media-baiting scene sans Ms. Wingate: “With a block to go he’d had enough. He stopped walking and held up a hand for quiet. ‘Ladies and gentlemen! Please, just a moment, ladies and gentlemen!’ They didn’t exactly get quiet, but they got quieter. When R.J. felt that all eyes were on him, he took a breath and looked squarely into the nearest camera. ‘Blow it out your asses,’ he said and turned to go.”
That’s my boy, I can hear Bogie lisp. Precisely the kind of breezy irreverence leavening Provost’s ill-fortuned-but-plucky protagonist of Baffled in Boston, which opens thusly: “On her way out the door my wife, Anne, said something about my choice of the freelance writing life being irresponsible, selfish, and unmanly. My unwillingness to wear a necktie was childish. My trips to Las Vegas were reckless. And most of her orgasms had been faked. Clearly, she was peeved. I was, she said, an utter failure. Also, she had fallen in love with another man, so she thought it would be best if she left me. It would turn out to be the second worst thing that happened that week.”
Marvelous beginning. I’ve read it five times already, and am tempted this instant to go back and savor it once again. Had I written it I’d be standing on some street corner in Manhattan right now belting it out to passersby, and not especially caring whether or not they dropped any bread in the hat at my feet. Hell, I’d sell my pet skink to the Gypsies if they’d align the stars to enable me to write a paragraph half as good. I’m beginning to think this is how Stephen Humphrey Bogart tried to learn to write fiction, reading incredibly boffo paragraphs by Gary Provost over and over, and then trying something similar. And failing--not quite miserably, but badly enough that his imitations stand out like nipples through a wet T-shirt.
But back to Baffled, a clever, crafty, murder mystery, swiftly paced with memorable characters, snappy dialogue, and believable suspense. It’s premised on the suspicious death of Molly Collins, world-famous Boston advice columnist, who was a dear friend of Jeff “Scotty” Scotland, the aforementioned failed freelance writer. Scotty is convinced the driver who ran Molly down on a Boston street did so deliberately. The paper she worked for was being sold to a Rupert Murdoch-type, profit-hungry tycoon with a reputation for buying reputable newspapers and stripping them of their journalistic scruples. The new owner is running a national contest to pick Molly's successor. Scotty believes this is somehow connected to her murder.
As with Stephen Bogart’s two novels, real life has a way of poking its head through the thin veneer of fiction. Bogart’s celebrated parents and his own problems handling the celebrity they bequeathed to him give his writing a cachet and voyeuristic allure of the sort that can make publishers drool. Baffled in Boston’s backstory is less prominent. Its protagonist, of course, is a mirror of its author. Provost, who had been dead a year when the book came out. In retrospect it appears Provost revealed, unwittingly one suspects, some prescience that brings a sad note to an otherwise sweet romp of a mystery: “I was in Dr. Lewis’s office,” Scotty tells us, “because I had become terrified about my health. My heart seemed to beat too often. My fingers trembled over the keyboard on my word processor. And often I felt as if a load of laundry had been stuffed into my chest cavity.”
This brief biographical sketch appears on Provost’s Web page:
Before the heart attack snatched him from the publishing world, Gary had sold 22 (fiction and nonfiction) books to major publishing houses. He’d been dubbed “The Dustin Hoffman of writing” for his versatility, and he’d sold books in most every genre: How-To texts for writers. True-Crime. YA novels. Satire. Mystery. Celebrity Biography. Business. Sports. Romance. Cooking.
Anything writing-related, Gary could do. He was an editor, book doctor, consultant to business, ghost-writer. And, out of a field of 12,000 applicants, he was one of only seven finalists in the Chicago Sun-Times’ search to replace advice columnist, Ann Landers.