I bought the Kindle omnibus because I wanted to give Toronto Inspector Charlie Salter a looksee, and I usually like to start with the first in a series. As there was no Kindle version of Charlie Salter #1, and the omnibus contains the first three, and the cost was not outrageous, I decided what the hell, they can't be that bad, it's only seven bucks and change, take the plunge, live dangerously, so I did. 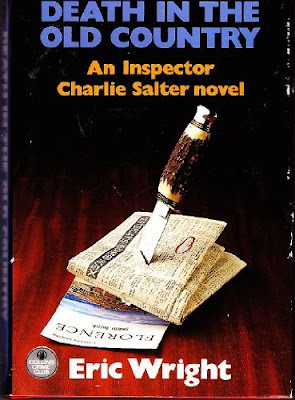 And the second one, Smoke Detector, was pretty bad—so bad I almost skipped the third, Death in the Old Country, but as you see, I didn't. My thinking was severalfold: I'd paid for the damned thing, and I kinda liked the first novel, The Night the Gods Smiled, and maybe Canadian author Eric Wright realized he should’ve accommodated his editor (who I imagine hated Smoke Detector, too) when he could see, once it came out, the awful things his editor would have tactfully mentioned to him, which of course would have angered him (an English professor, mind you!), and buckled down determined to write a humdinger to save his new avocation with Charlie Salter. And he did.
And the ever-diplomatic Bitter Tea & Mystery’s Tracy K, whose reviews had persuade me to try a Charlie Salter novel despite her full disclosure that cautioned me I might not take to some of the writing, suggested I might find Death in the Old Country more to my liking because of the European setting, where Charlie and his wife are vacationing. Tracy, of course, was smack dab on the money.
We join Charlie and Annie “at three o’clock on a rainy afternoon in early May.” The couple are driving carefully in heavy traffic on a narrow country road, and Charlie is happy conditions are so bad that no one is trying to pass him “as he leads a procession of cars at a safe speed across the middle of England.” He’s driving a miniature rented car, and is “very nearly comfortable with being on the wrong side of the road.” Annie is beside him studying a guide book.
We soon learn that all is not 100% idyllic on this week away from their two adolescent sons who are staying with relatives in Canada. Nothing serious, but we learn from Charlie that a familiar (to me anyway) dissonance exists between cop and wife as to when and where to seek lodging for the night. Annie’s a little fussier than Charlie, surprising you, perhaps, but not me. They’d decided to embark on this “major change of scene and rhythm” following “a long, cold, Toronto winter, and a bad patch in their marriage.”
A family on a motorcycle with jury-rigged plywood sidecar crashing into their rented car sweeps away these petty tensions and land the Salters in the nearest village to get their car fixed and cooperate with the authorities over the accident—in which mercifully no one was injured.
It’s while they’re stuck in this village that the story takes off. The owner of the inn is found stabbed to death in his office, and Charlie is soon involved with the local police and a regional superintendent trying to solve the murder. The solution seemed easy to the local chief inspector at first when the owner’s blood-spattered wife confessed, but it soon appears she was covering for her brother, a waiter fresh from Italy, whom she feared had done the dirty deed. Charlie’s involvement is peripheral, more as an extra brain than doing any actual police work. A sporting professional rivalry strikes sparks between Charlie and the regional superintendent while the local chief, new in the position and not especially bright, is relegated to getting coffee and running errands.
The narrow field of suspects include a young waiter the guests call “Smarmy Boy,” a mysterious single English woman and an American girl staying at the inn. An English couple, Maude and Henry, take up with the Salters, but are never under serious suspicion, which of course makes them suspicious to any experienced mystery reader. Of which I am not. Solving the murder does involve unraveling some twists, a process I found interesting if not of nail-biting suspense. I enjoyed more the interplay between the Salters and the English couple. Maude is the nosy type and doesn’t believe Charlie’s cover story that he’s a transportation supervisor in Toronto, but spends most of her time with Annie shopping and visiting historical sites. Charlie befriends one of the local constables, who gives him tips on races at the local track. Charlies invariably wins. 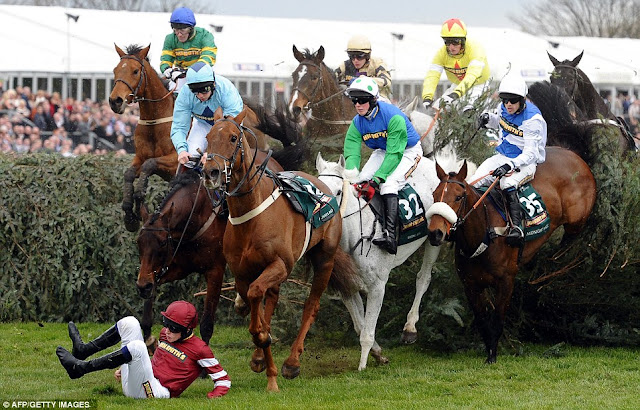 Conversations are peppered with some of the more bizarre English expressions, such as “bob’s your uncle” and “keep your pecker up” and “cheery-bye, then.”
After Charlie finds his passport has been moved to a different pocket in his jacket while he and Annie were out, he tries and fails at an old James Bond trick: “He considered putting a hair across the door of the wardrobe, but when he tried he was unable to get it to stay in place. He tried spit and scotch tape until the area around the invisible hair began to look slightly wrecked, and he abandoned the idea, wiped the door clean and joined Henry.” You may laugh. I did.
The diversion noticeably perks up the Salters’ vacation, which had been getting a tad humdrum for Charlie. “He felt as if he had been acting in a brightly colored travelogue, moving through the gentle, if rain-soaked, English countryside without really believing in it or taking the inhabitants seriously. A murder changed that: the film was black and white again, familiar and real.”
Nice writing, and the denouement was handled well, concluding at the racetrack that Charlie had visited on several occasions. Let it be said that I enjoyed Death in the Old Country. Found it to be the best of the first three Salter novels. Not sure if there are any more on Kindle, but if there are, I’ll download them, or bob’s your uncle (did I use that right?).
Cheery-bye, then.
[Find more Friday's Forgotten Books links at Todd Mason's amazingly eclectic blog]