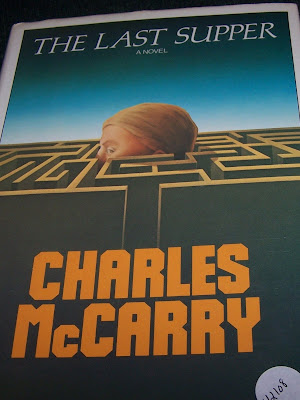 In the course of the first several paragraphs of The Last Supper the author, Charles McCarry, managed to seduce me, enrage me, and force me to read an overlong, complicated novel of infuriating murders, spies, lust, and tragic romance. I suppose that last adjective is redundant, as all romance ultimately leads to tragedy. Doesn’t it. And yet we let it seduce us and lead us to its destined, inescapable, shattering disillusionment. Every time. Don’t we. Meanwhile, back to those first several paragraphs.
We meet Molly Benson and Paul, her lover, who, two years after the start of their affair, has only recently told her he is a spy. She’d been wondering about his odd absences, unexplained silences, remote behavior when not with her in bed, and that they’re living in a “safe house.” Right away I know she’s dumb. But I’ve fallen for her anyway, as she is unimaginably beautiful, sexy, sweet, and loving. Paul never says goodbye when he leaves her, which he does within a paragraph, heading to Vietnam, he tells her. He points out a man across the street, assuring her the man is there to keep an eye out for her. He tells her to be careful, gives her an envelope containing ten-thousand dollars, and heads off to the airport, without, of course, saying goodbye. So now I’m alone with Molly, oh boy. But, of course, she has no intention of staying put. She’s going to the airport to see her lover off. She gets dressed, goes out, and hails a taxi. As she heads across the street to the taxi, a car parked nearby shoots out from the curb, runs her down, and kills her instantly. She was “flyswatted,” as we soon learn is what spies call their favorite method of assassination.
I’m momentarily devastated. But disgust quickly intervenes that here we go again—the age-old movie cliché where the victim freezes, staring stupidly at the vehicle that’s obviously going to run them down, sometimes at the last second running straight ahead in front of the vehicle instead of leaping to one side. Protagonists always leap, sanely and safely, to one side, but victims always let themselves get hit. I’M SICK TO DEATH OF IT! WHY IN HELL CAN’T MOVIE DIRECTORS AND NOVELISTS SEE HOW STUPID THIS IS???
Sorry. I’m okay. Breathing normally again. But it happens a couple more times in The Last Supper, and this by a superb novelist who actually spent some time as a CIA deep-cover field agent, we are told. I’d like to think some stupid desk-bound editor’s to blame for these irritating flyswattings...in fact, for the sake of my blood pressure, this is precisely what I’m going to think, blaming the idiot editor for diminishing my regard for the beautiful, delicious, impetuous, sweetly naïve, dumb Molly Benson. 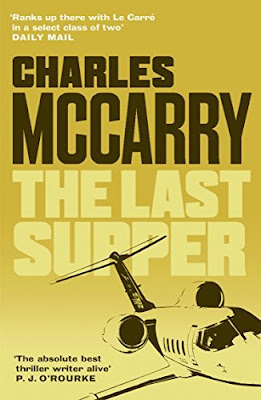 Only much later, after finishing this multi-generational spy novel (which rings a little of Norman Mailer’s Harlot’s Ghost) did it become clear to me Molly’s mysterious, never-say-goodbye spy lover, Paul Christopher, is the star of McCarry’s ten-novel Christopher family spy series that had been recommended to me by blogging friend Tracy K of Bitter Tea & Mystery. The most popular and famous of this series is The Tears of Autumn, in which Paul Christopher investigates JFK’s assassination, apparently finding plausible evidence the Dallas tragedy was retribution for the assassination of South Vietnamese President Ngo Dinh Diem and his two brothers. Tracy K says Tears of Autumn is her favorite, and Brendan Bernard said in LA Weekly, "It’s tempting to say that Charles McCarry’s The Tears of Autumn is the greatest espionage novel ever written by an American, if only because it’s hard to conceive of one that could possibly be better. But since no one can claim to have read every America espionage novel ever written, let’s just say that The Tears of Autumn is a perfect spy novel, and that its hero, Paul Christopher, should by all rights be known the world over as the thinking man’s James Bond — and woman’s too."
The jury’s still out for me on Tears, as I feel a tad saturated right now with Christophers, and, altho I can’t quite put my finger on why, I’m just not ready right now to revisit the Dallas thing once again. There’ve been too many conspiracy theories with seemingly conclusive proof, and persuasive debunkings of that proof, as well. It’s the biggest crime mystery of the century, and likely will remain a mystery for as long as this planet can sustain human life.
As to The Last Supper, the plot is far too complex for me to try doing justice to it in a few sentences. Click on the hyperlinked title in my first paragraph, which will take you to the book’s Amazon page. There you will find the publisher’s synopsis, which will give you the gist without any spoilers. Please don’t think I’m being sarcastic, in light of what may seem to some a spoiler at the top of this review. Molly Benson’s flyswatting is merely a teaser, in my opinion, the narrative never revisits her as anything but a passing reference henceforth. Other characters and their relationships weave in and out as the novel shifts back and forth in time and place. It’s a style McCarry is said to employ in all of the Christopher novels.
McCarry’s writing has been compared by professional critics with that of British spy novelist John le Carré. I’ve read several le Carré novels, and enjoyed them all. Comparing just Last Supper with them, I would say le Carré’s characters are more interesting. I agree with some critics that Christopher and his father are too good, in every way, to be believable as real men. Except for Molly Benson, the female characters are more natural and engaging. My favorite supporting character is Paul Christopher’s colorful friend, mentor, and master spy, Barnabas Wolkowitz. Unforgettable.
McCarry’s writing is compelling. Both the principal Christophers—father and son—are published poets, and examples of their lyricism are included in the narrative. Ironic humor is ever present, threading thru the convoluted intertwining stories. McCarry, describing life on the German island of Rügen, where Paul’s young bachelor father has recently met Lori, the woman he would marry, tells us that “Once again, the Germans were happy; the whole country seemed to exist in a daze of patriotic joy. In the beech forests...youths marched under party banners, shattering the quiet with their singing. On weekends, the full-throated sound of them came through the open windows at Berwick.
“‘Government by operetta,’ Lori said; ‘the Germans have a weakness for it.’”