These days to make it in Hollywood it would have to have a better title than Greenmantle, which sounds too much like some freak comic-book superhero. On second thought, comic-book superheroes are precisely what Hollywood hungers for these days, pretty much bumping from the pinnacle of adolescent necessity the shadow-faced manly-looking men and voluminous-lipped edgy women (with their stunt doubles) in those derring-do popcorn thrillers older adults risk peeing their pants before missing a single onscreen second. 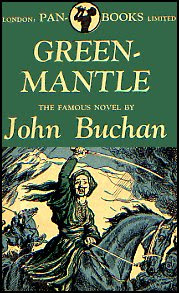 While Greenmantle is in fact a quintessential heroic flesh-and-blood action thriller, albeit taking place before the advent of the electric razors that allow the manly-looking man to sport the de rigueur permanent shadow-face that sets the edgy woman’s bee-stung-lips aquiver, its plot would be dangerously incorrect from progressive viewpoints in that it paints Islam as an evil would-be empire courted by evil Germany as the key to bumping off the righteous British Empire in World War I. Of course, were something “based on” Greenmantle to be filmed tomorrow modern changes most certainly would be made regarding the shadows and lips and politics and prejudices. And the title.
We could have some fun here, as author John Buchan’s protagonist, Richard Hannay, is the same hero of The Thirty-Nine Steps, which The Guardian listed in 2014 as one of the 100 best novels in the English language. It’s been filmed several times, the first by Alfred Hitchcock in 1935. I doubt as memorable a Hollywood title could be cooked up for Greenmantle, but in keeping with the crucial marketability of twenty-first century commercial filmdom one might consider at least subliminal references to Lawrence of Arabia, Indiana Jones, The Wizard of Oz, and The Magnificent Seven.
I’d probly pay ten bucks for a small multiplex popcorn to see Four Righteous White Dudes Hunt the Stunning Evil Witch of Constantinople, or perhaps something a tad shorter, like Ho-ly Scheisse!, or maybe wait to catch it at the neighborhood theater where the popcorn’s only six bucks. (You should go while it’s still on a big screen, though. I don’t believe DVD could do it justice.) 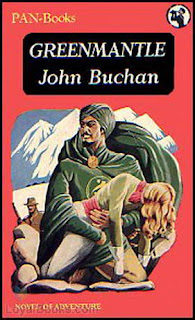 But seriously, friends, Greenmantle truly is a most excellent romp of a buddy pic with some genuinely dangerous villains (including a ruthlessly hypnotic babe) and gaspworthy political and ethnic observations reflecting the time (1916). Such as: The “Kaiser will fling overboard a lot of ballast in Europe, and it will look like a big victory for the Allies, but he won't be beaten if he has the road to the East safe. Germany's like a scorpion: her sting's in her tail, and that tail stretches way down into Asia.”
As our adventure begins, Richard Hannay, an army Major recuperating from an especially bloody battle with German troops in West Africa, is recruited to lead an undercover mission penetrating a mysterious German plot to unite the Arab nations against Britain and its allies. He assembles two men to join the mission. His first pick is Sandy, “Sandy...the wandering Scot carried to the pitch of genius. In old days he would have led a crusade or discovered a new road to the Indies. Today he merely roamed as the spirit moved him, till the war swept him up and dumped him down in my battalion.”
Next comes John Scantlebury Blenkiron. a dyspeptic American, recommended by Sir Walter Bullivant, the Foreign Office official who’d recruited him, and with whom Hannay had worked previously in The Thirty-Nine Steps. Blenkiron, a citizen of Boston, who’d been born and raised in Indiana, “had done wonders for the Allies in the States,” Bullivant had told Hannay in selling him Blenkiron. “He had nosed out the Dumba plot, and had been instrumental in getting the portfolio of Dr Albert. Von Papen's spies had tried to murder him, after he had defeated an attempt to blow up one of the big gun factories. Sir Walter had written at the end: 'The best man we ever had. Better than Scudder. He would go through hell with a box of bismuth tablets and a pack of Patience cards.” 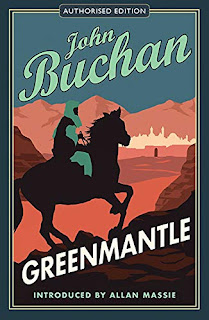 The three don’t have much to go on, only a notion learned by Bullivant’s son that the Germans believed some uniting figure, code named “Greenmantle.” would soon arise in the Middle East, and, with a little persuasion from the Kaiser’s agents, could turn the world of Islam to the German point of view. “Islam is a fighting creed, and the mullah still stands in the pulpit with the Koran in one hand and a drawn sword in the other,” Bullivant has told Hannay, a sentiment shared by many in the West since 9-11 but dismissed as racist hysteria by many others in the West at this very moment.
Bullivant’s son, as he was being murdered by “enemies” in the Middle East, was able to transmit three cryptic words his father believes are clues to the identity and whereabouts of the unknown uniting figure. Ruminating on this seemingly impossible mission with Sandy and Blenkiron, Hannay has second thoughts: “Suddenly I had a feeling that the whole affair was stark lunacy. Here were we three simpletons sitting in a London flat and projecting a mission into the enemy's citadel without an idea what we were to do or how we were to do it.”
They decide to split up and travel on different roads, agreeing to meet up in Constantinople by a certain date. Along the way, Hannay recruits Peter Pienaar, a prospector/hunter/soldier of fortune Hannay knew from time he’d spent in Africa. “In those early days he was none too good a citizen. He was in Swaziland with Bob Macnab, and you know what that means,” he tells us. I don’t have an inkling what in hell that means other than that Hannay knows and trusts Pienaar as a valuable addition to his team. 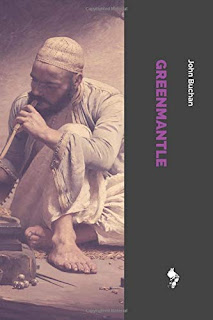 Because Hannay’s narrating this tale, we see, hear, and feel only what he sees, hears and feels on his trek with Pienaar toward Constantinople, at one point going undercover as a couple of Dutch adventurers who get caught up with a nasty German Col. von Stumm, whom they must convince they hate the British. Stumm is a true heavy here, and ends up pursuing the two half the way to Constantinople. Stumm, Hannay muses, “was a man of remarkable qualities, which would have brought him to the highest distinction in the Stone Age.”
Along the way, Hannay’s and Pienaar’s paths cross several times with those of Sandy and Blenkiron, who often save their skins in the nick of time. Eventually they learn the real villain, whom even Stumm fears, is a woman. At one point unbeknownst at first to them, she becomes their landlady. Blenkiron has the misfortune of experiencing her before the others:
“ ‘I've been to see our pretty landlady,' he said. 'She sent for me and I hobbled off with a grip full of plans, for she's mighty set on Mesopotamy.'
“ 'Anything about Greenmantle?' I asked eagerly.
“ 'Why, no, but I have reached one conclusion. I opine that the hapless prophet has no sort of time with that lady. I opine that he will soon wish himself in Paradise. For if Almighty God ever created a female devil it's Madame von Einem.'
“He sipped a little more milk with a grave face. 'That isn't my duodenal dyspepsia, Major. It's the verdict of a ripe experience, for I have a cool and penetrating judgment, even if I've a deranged stomach. And I give it as my considered conclusion that that woman's mad and bad--but principally bad.' ”
Hannay, of course, soon has his own meeting with the bad lady, and—surprise surprise--she likes him.
Hannay shares with us some ruminations on the German people. This, for example: “I realized something of the might of Germany. She produced good and bad, cads and gentlemen, but she could put a bit of the fanatic into them all.” Three-quarters of my blood is German, and I suppose I should take offense, but...I agree with Hannay. And perhaps it is safe to say it applies as well to a majority of the recent U.S. electorate?
Without any particular context I recall, Hannay offers us another gem: “To be able to laugh and to be merciful are the only things that make man better than the beasts.”
And here’s Blenkiron contemplating the “bad and mad” Madame von Einem in an observation that still rings true: “My trouble is that she puts me out of countenance, and I can't fit her in as an antagonist. I guess we Americans haven't got the right poise for dealing with that kind of female. We've exalted our womenfolk into little tin gods, and at the same time left them out of the real business of life. Consequently, when we strike one playing the biggest kind of man's game we can't place her. We aren't used to regarding them as anything except angels and children.”
And who would argue with this from Sandy? “I fancy it isn't the men who get most out of the world and are always buoyant and cheerful [who] most fear to die. Rather it is the weak-engined souls who go about with dull eyes, [who] cling most fiercely to life. They have not the joy of being alive which is a kind of earnest of immortality…I know that my thoughts were chiefly about the jolly things that I had seen and done; not regret, but gratitude.”
More and more I’m liking Ho-ly Scheisse! for the movie.