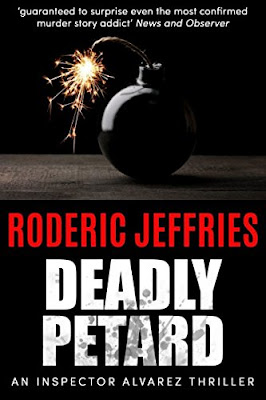 The further I chugged into Deadly Petard the more I worried about Inspector Enrique Alvarez. And I started worrying right off the bat when in the first sentence we find him drinking brandy in a bar, dreaming about the lunch with his cousin he’s anticipating in two and a half hours. When Dolores cooked pork loin wrapped in cabbage leaves and flavored with pine kernels, raisins, and sobrasada, “it was a dish fit for a king.”


But he’s not a king. He’s an overweight, out of shape, aging policeman on the Balearic island of Mallorca. He’s admittedly lazy and reluctant to do his job, especially when transplanted English citizens are involved. I guess I’d sort of been hoping that by book seven in the series he’d have cleaned his act up a little. I kinda liked the guy despite his gluttonous, lackadaisical ways, yet, I mused, after reading the first three in the series, maybe I was getting a little tired of him, unconsciously hoping some gorgeous energetic young damsel rookie constable had been assigned to work with him. Could be that’s why I jumped books four, five, and six to land on seven—following that unconscious hope the energetic gorgeous young damsel rookie would have arrived by then. She hadn’t, and I have a hunch now she never will. After Alvarez’s grumbling interview of an English transplant at the beginning, the action shifts to England where a suspicious suicide took place. The interview had failed to shake the alibi given by Gertrude Dean for the victim’s husband, thus boomeranging the investigation back to England and leaving the reluctant Mallorquin detective happily behind. Happily for him, but for the next nine chapters I was uneasily coming to the notion an Englishman, not my fantasy lass was nudging Alvarez to a cameo role. Were that the case, I decided, I knew I’d poop out and likely never read another in the thirty-seven book series. Not with wholesome young family man Brit Detective-Constable Cullon in the spotlight.
Cullon flies to Mallorca after Gertrude Dean is found dead of an apparent suicide in the precisely same manner—sleeping pills and plastic bag over head—as the wife of the suspect for whom Dean had alibied in England. Dean had moved to Mallorca after the suspicious death, as had the victim’s widower, one of the most loathsome scalawags I’ve come across in fiction. Dean and the scalawag are neighbors, but the scalawag has a similar alibi for Dean’s death as Dean had given him for his wife’s. No wonder then this was Alvarez’s reaction to news of Gertrude Dean’s presumed suicide:
“He sighed, replaced the receiver. ‘To the devil with the English!’ he said aloud. He leaned over, opened the bottom right-hand drawer of his desk, and brought out a bottle of brandy and a tumbler. He poured himself out a very generous drink. There were times when a man needed comforting.” Alvarez blunders amiably around for half a dozen chapters, getting nowhere, finding nothing pointing conclusively to murder. It isn’t until chapter thirteen that Cullen’s boss orders him to go to Mallorca.
“ ‘Do what?” said Cullon, voice high with surprise.
“ ‘Work with the police. Show ‘em the ropes, jolly ‘em along, but make certain that if it’s humanly possible they land West. Just one word of warning. They’re full of that machismo lark so you’ll have to let ‘em think they’ve had all the bright ideas, even if you’ve had to lead ‘em by the hand and solve the case from beginning to end.’ ” I can imagine Alvarez’s hilarity had he heard those instructions to Cullen, But guess who ultimately will have the biggest laugh were his spirit less generous?


The two cops get along, although Cullen’s running critique of his Mallorquin counterpart’s half-hearted detective work stays pretty much in his head. Fingerprints are something Alvarez pays little heed. The two cops’ exchanges on this matter as they examine evidence brought to mind one of those moronic skits we love The Three Stooges for:
“Any idea where her typewriter is?”
“In the cupboard over there.”
“Presumably you’ve checked that for prints and the type?”
“Not yet.”
“Perhaps…”
[Cullon indicates a plastic bag] “Presumably this hasn’t been checked out either?”
“I’m afraid it hasn’t.”
“D’you think it could be arranged for things to be checked?”
“But of course.”
“You don’t mind if now I just have a bit of a search?”
“Whatever you wish.”

At the same time Cullon’s gently nudging Alvarez to think like an English policeman, Alvarez is slyly leading Cullon astray, taking him to the beach, to bars, to meet his friends and family. Cullon’s superior begins to suspect his investigator is turning his assignment into a vacation, and calls him back to England. Alvarez and Cullon discuss the case while Alvarez drives his English counterpart to the airport. Cullon has wrapped up the case in his mind, not because he believes the scalawag is innocent, but because the two simply have not found enough evidence to prove murder. As the Brit makes his points, Alvarez slips in questions they haven’t answered. Alvarez, who doesn’t seem to really care either way—both victim and suspect are British--is merely having fun with Cullon.
It is only after Cullon’s flight is safely off the ground that Alvarez quietly goes about his business, this time in earnest. He has his own doubts, and knows how to satisfy them. He does, and it is my sincere doubt that when it’s all over he’ll send a card to Cullon saying simply this: BWAAAHAHAHAHAHAHAHA. That would not be in keeping with the Mallorquin style.