John Buchan wrote The Thirty-Nine Steps after running out of lite reading to cheer him up one winter when he was sick. He described it to a friend as "that elemental type of tale which Americans call the 'dime novel' and which we know as the 'shocker'—the romance where the incidents defy the probabilities, and march just inside the borders of the possible." 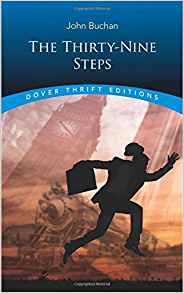 After an illustrious career that included writing more than 100 published books and serving as a diplomat and politician, eventually winning a peerage as Lord Tweedsmuir and appointment as Governor General of Canada, he is best known today for that little spy-novel, which The Guardian listed in 2014 as one of the 100 best novels in the English language.
That last, about the language, would have sent one of my eyebrows skyward, were I capable of such a maneuver, because the novel's protagonist, Richard Hannay, spends much of this short novel running and hiding in the wilds of Scotland from police, who believe he impaled his roommate with a dagger through the heart to the floor back in London, and from German spies bent presumably on doing the same to him. 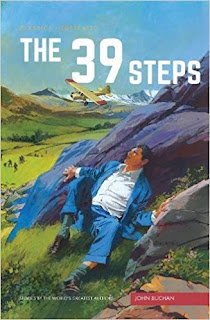 Here’s what I mean about the language barrier:

“'And that's a' I get,' he moaned. 'A heid better than hell fire, and twae een lookin' different ways for the Sabbath.'

“'What did it?' I asked.
“'A drink they ca' brandy. Bein' a teetotaller I keepit off the whisky, but I was nip-nippin' a' day at this brandy, and I doubt I'll no be weel for a fortnicht.' His voice died away into a splutter, and sleep once more laid its heavy hand on him.”


Several films have been made of The Thirty-Nine Steps, the first by Alfred Hitchcock in 1935. I believe I watched part of one on our old B&W TV. If any of them had kept this Scottish brogue in the dialogue, I would have needed subtitles to know what in hell was being said. All I remember is seeing some male character pacing around outdoors by some buildings, counting his steps, while dark, dramatic music throbbed in the background (or maybe the foreground). I’ve wondered ever since what the story was all about. 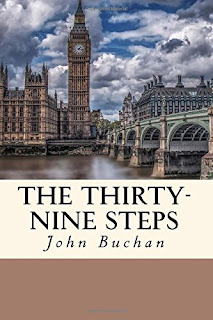 The Thirty-Nine Steps opens just prior to the first world war with Hannay recently back from an engineering gig in South Africa, bored out of his mind in London. “The weather made me liverish, the talk of the ordinary Englishman made me sick, I couldn't get enough exercise, and the amusements of London seemed as flat as soda- water that has been standing in the sun...
“Here was I, thirty-seven years old, sound in mind and limb, with enough money to have a good time, yawning my head off all day. I had just about settled to clear out and get back to the veld, for I was the best bored man in the United Kingdom.”
Then along comes Franklin P. Scudder to liven things up. Covering the war buildup for a Chicago newspaper, Scudder has stumbled upon a sinister plot involving German agents, who then begin following him. Fearing for his life, he feigns his own death and persuades Hannay to let him hide in Hannay’s flat while he plans to shake the tailing Germans. He tells Hannay what he’s found, stirring Hannay from his boredom. But, of course, the adage “be careful what you wish for” thickens the plot—deliciously.


Hannay returns home from dinner to find Scudder in the aforementioned impaled condition, and Hannay knows the target’s now painted on him. Figuring the best place to hide is in the wilds of his native Scotland, off he goes, about thirty-nine steps ahead of the police, who believe he killed Scudder, and, as we know, of the bad guys mit der terrifying Cherman accents, ja. (I didn’t count the steps between the pursuers and the pursued, in case you were wondering. Just my corny little joke.)

The chase. Ah, the glorious chase, with narrow escapes, harrowing suspense, and perhaps a tad too many incredible coincidences of the sort “where the incidents defy the probabilities, and march just inside the borders of the possible." I must say at times they stray a tad over those borders, and yet, like watching Indiana Jones outrun the giant rolling boulder or James Bond crawl through searing heat ducts to escape Dr. No’s evil lair, my imagined adrenalin was pumping with great vicarious enthusiasm for Richard Hannay.
It didn’t hurt that Hannay himself tells us he’s aware of the implausibility of some of these happenstances: “So far I had been miraculously lucky. The milkman, the literary innkeeper, Sir Harry, the roadman, and the idiotic Marmie, were all pieces of undeserved good fortune. Somehow the first success gave me a feeling that I was going to pull the thing through.”
And then, fleeing spies on the ground and in the air, he comes upon a remote cottage occupied by an old man who hid Hannay while sending his pursuers away. “Once again I had found an unexpected sanctuary. All the same I was not comfortable. There was something about the old gentleman which puzzled and rather terrified me. He had been too easy and ready, almost as if he had expected me. And his eyes had been horribly intelligent.”
Hannay recalls Scudder telling him about “a man that lisped in his speech, and he described very particularly somebody that he never referred to without a shudder—an old man with a young voice who could hood his eyes like a hawk.”
“As he spoke,” Hannay says of the old man in the cottage, “his eyelids seemed to tremble and to fall a little over his keen grey eyes. In a flash the phrase of Scudder's came back to me, when he had described the man he most dreaded in the world…
“Then I saw that I had walked straight into the enemy's headquarters.”
So what of the thirty-nine steps? Don’t expect to find the answer until nearly the end. Hannay has no idea, and he’d be the one to shed some light on the mystery. All he does know is simply one bracketed phrase that appears half a dozen times in Scudder’s notebook: “’Thirty-nine steps,’ was the phrase; and at its last time of use it ran—‘Thirty-nine steps, I counted them—high tide 10.17 p.m.'
“I could make nothing of that.”