There was a character actor who always got bumped off in movies I watched as a kid. Soon as I saw him on the screen, as a hotel clerk, a barkeep--someone who stumbles into a holdup or some other criminal activity, which was the only kind of role I remember seeing him in, I knew instantly he was about to get bumped off, as he was never onscreen long enough to develop any role other than victim. I don't know his name, but I can see his dumpy little body clearly and hear the high-pitched, nervous, raspy voice. which reminded me of the Snow White dwarf "Doc," begging desperately not to get bumped off. I've Googled until my fingers screamed, trying every which way to identify this putz, to no avail. I may even have added "born with bump me off tattooed on his butt" to my Googling. You'd think someone at Google would have felt a little compassion for me, steered me in the right direction. But... 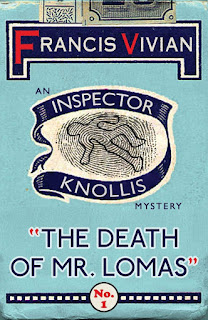 If The Death of Mr. Lomas had been made into a movie back in the day (the book was published in 1941) guess who would have played Mr. Lomas? I'll let author Francis Vivian give you a clue—the first paragraph of the prologue:
He was a little old man with shrewd grey eyes. He had a yellowish goatee beard, a moustache with waxed points, and bushy eyebrows. His nostrils were twitching and his lips quavering when he called on the Chief Constable of Burnham early that fine June morning. He allowed himself no more than the front edge of the chair with which he was provided and each time his eyes met those of the Chief Constable they retreated behind their lids like the horns of a snail.
A little later, still in the chief constable's office, the little old man comes to the point: "Mr. Lomas wriggled on his inch of chair. His beard quavered ridiculously as he tried to force words from his throat. He opened his mouth twice, only to close it again...[and] eventually gripped the arms of the chair and leaned forward. 'I am being poisoned, Sir Wilfred!' he said dramatically." Sir Wilfred, of course, thinks him a kook, and dismisses him,
But later that day...oh yes...Mr. Lomas indeed turns up dead. His beard had been shaved off postmortem. Tests soon establish fatal cocaine poisoning.
It's probably a good thing this observation by local police Inspector Gordon Knollis didn't appear until chapter eleven or one might have wondered by then if the honorable protagonist of Vivian's ten Inspector Knollis cases was in fact quite so honorable, or was at best full of baloney: "...this is no story-book case, and there will be no surprise ending. The most obvious person killed him, for the commonest and most obvious reason. That person went about it in the simplest possible way, and, paradoxically, it is the factor of simplicity that has proved the complication in the case.”
Well, maybe in Knollis's mind. In my mind that statement, especially by chapter eleven, is laughable. A veritable horde of suspects emerged almost immediately after Mr. Lomas's OD. Among them are his dentist son and spinster daughter, who stand to inherit a sizable cash estate, a pharmacist "best friend" who loved Lomas's mistreated wife (who died recently), the son's mysterious girlfriend, and assorted other vaguely sinister characters. Complementing these suspects with their motives, means, and personalities was the early discovery Lomas had been a prickly, miserly SOB more akin to the fairytale troll under the bridge than the lovable Dwarf Doc impression I'd somehow conjured at the start. And despite Knollis's denial of complications, this, with its multitude of secretive, potential poisoners, was one of the most complicated crime novels I've ever read. It took Knollis, with his assistants, to probe and unravel and theorize and analyze and puzzle the pieces together to...well let's let him explain:
"I always wanted to be an engineer," he tells his wife, "to take things to pieces and put them together again; I always wanted to know how things work, and why they work.”
She smiled, the loyal wife boosting her hubby's self-confidence. “Doesn’t that prove that you have a flair for detection? You deal with men’s minds, motives, and desires. You dissect their actions, theorize on why they do this, and that, and the other; on how they could have done this, and that, and the other. You are just as much an engineer as if you were dealing with engines and machinery.”
She allows a little humor into the mood by telling him, “you look like a detective.”
This revelation was most welcome with me, as my introduction to the Knollis series had been book six, The Singing Masons, in which he's now with Scotland Yard and is assigned to aid local constables stuck with a most unusual murder among several beekeepers and their families. The Death of Mr. Lomas is the series debut, providing us an introduction to its star.
Knollis, the author tells us, "looked more like a detective than anything Hollywood could produce in its most enthusiastic moments. He might have been taken from stock. He was lean, and had a long inquisitive nose that was destined to be thrust into mysteries whether mechanical or psychological. His eyes were of a cold grey hue, mere slits through which he regarded the world with suspicion. They were forbidding until the creases at the corners were noticed, but it was seldom they came into play unless he was relaxing in his wife’s company or playing bears with the two infant versions of himself who were now safely tucked up in the nursery above them. Knollis’s major trait was patience, a fact thoroughly appreciated both by his wife and by the officers with whom he worked; it was his patience that had enabled him to rise from a uniformed constable on beat to the head of the Burnham Criminal Investigation Department. He was now forty-one years of age, and eminently satisfied with his lot."
So there. Sort of a modernized, domesticized version of Sherlock Holmes. Basil Rathbone would have been perfect.
There are some disturbing, as well as eye-rolling moments in the narrative attributable presumably to the WWII-era majority public sensibility. We have curtains described as nigger-brown, and physical features suggesting moral turpitude, such as the description of Lomas's dentist son as “clear-eyed and fresh-complexioned. His jaw was tight, but Knollis, from long experience, recognized signs of moral weakness in the curve of the chin and the sloping angle of the jaw.” Gotta wonder how many male readers reflexively reached for their own jaws after reading that line. Alas I, of impeccably adequate moral strength, succumbed, as well, dammit.
This one still holds, tho, I submit: “I cannot understand the ramifications of the female mind.”
Vivian leaves us with one mystery unsolved. Perhaps more can be learned in later episodes: Knollis calls his typewriter “George.”


This just in: My friends at Google evidently have been reading over my shoulder, as they just now have surprised me with a gift! The guy from whom I learned as a young, impressionable moviegoer never to beg murderers for mercy was Mr. Percy Helton. May he rest in peace at long, long last.