DEATH OF A DISSIDENT – Stuart Kaminsky 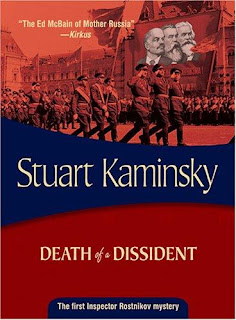 My initial brainstorm was to copy Stuart Kaminsky's complete introduction to the Mysterious Press edition of his Death of a Dissident with maybe a highlight here and there and an occasional comment of my own to break it up. But I quickly realized copyright restrictions would undoubtedly toss a greasy wrench into the plan, so I knew I'd have to get off my lazy metaphoric butt and write an actual review. Rest assured, however, Kaminsky's introduction is so good I still intend to use great chunks of it, either in paraphrase or as direct quotes. It's (as I would argue to the judge in a copyright infringement lawsuit) unavoidable!


For one, Kaminsky relieved some of my reluctance to read his crime novel about a Moscow cop, concerned that maybe he wouldn't measure up well with Martin Cruz Smith's Arkady Renko. I'd just finished re-reading the Renko series and enjoying it even more than I had the first go-round. Kaminsky addresses that concern head-on. By coincidence, Death of a Dissident came out about a month after Gorky Park, the first Renko episode. "Though I had enjoyed Martin Cruz Smith’s novels— and still do," Kaminsky tells us, "I couldn’t read Gorky Park. The reviews made it clear that our books bore only a superficial resemblance to each other."


I agree. Neither the plots nor the styles are comparable much beyond their Soviet Russian milieu. The Arkady Renko novels remind me more of the complex stories and characterizations John le Carré employs in his novels, whereas Death of a Dissident has an Ed McBain feel, à la his 87th Precinct crime series. Oh, alright, I cheated on that one. Kaminsky makes the McBain resemblance abundantly clear in his aforementioned intro: “I love Ed McBain’s 87th Precinct novels,” he says, and mentions specific McBain influences throughout. But wait. “I also love Georges Simenon’s Maigret novels, and John Creasy’s Gideon novels were favorites of mine in high school. Above all, I love ‘classical’ Russian literature, particularly Dostoevsky and, even more specifically, Crime and Punishment.


And they all, as well as Russian writers Chekhov and Gogol, come into play in Death of a Dissident. His lead character, Chief Inspector Porfiry Rostnikov, he frankly admits, “bears more than a passing resemblance to Jules Maigret. His methods are similar, but his milieu is much different. Rostnikov is, like George Gideon, a man of action. And it is no coincidence that Porfiry Petrovich Rostnikov bears the name of the magistrate who drives [Dostoevsky’s] Raskolnikov to a confession of murder. Rostnikov, finally is my fantasy of my Russian grandfather, my father’s father, who died when I was about six.”


Another ensemble character, one of Rostnikov’s assistants in Death of a Dissident, he tells us, has a quasi-role model from the Star Trek TV series. “Emil Karpo...is a tall, gaunt, loyal, humorless traditionalist who bears some resemblance to Mr...Spock. Karpo is a haunted man who had devoted his life and loyalty to the religion of Communism which, as practiced in the Soviet Union, keeps letting him down. Karpo wished to deny his emotions, the needs of his body and the human loyalties which, ultimately, are more immediate than his devotion to duty.”


Rostnikov’s other assistant, Sasha Tkach (no help with the pronunciation) is, in some ways, what Burt Kling might have become in the 87th Precinct novels, had life not dealt him a monstrous love life and had he been plunked down in contemporary Russia rather than in Isola. Sasha’s concerns are domestic. Life, the complications of a changing Russia, a growing family, and his inability to cope with women threaten to overwhelm him.”


So there you have the three lead characters, explained in a way I suspect most English teachers—high school presumably and most certainly undergraduate if we’re talking college—would accept as analyses in a homework composition or surprise quiz. And there’s even more in Kaminsky’s intro for the serious pseudo-scholastic plagiarist.


As for the plot, it’s classic McBain/Simenon/Creasy police procedural. A famous Soviet dissident is murdered with a sickle in his apartment a day before his scheduled trial, despite being under constant KGB surveillance. Hmmm. The Soviets appear to be torn between rejoicing and fearful the dissident’s death will reflect badly on them in the West, as though due process was denied. So Rostnikov and his sidekicks are encouraged to find the murderer so it appears justice has been done. Any murderer will suffice so long as the government can claim deniability. Rostnikov answers to the Cbief Procurator in his precinct (or district or whatever the hell the Moscow political division is called) is a good party member, but respects Rostnikov, who is a good cop, and superficially a good party member. They get along, unlike Renko and his bosses (called “prosecutors” in those novels), where barely concealed corruption makes a mockery of party ideals with every blink of every eye. 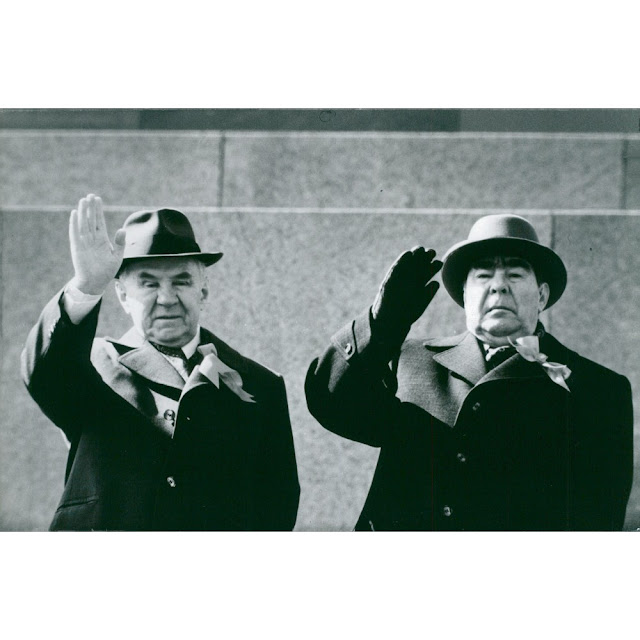 The police work is credible and interestingly revealed, providing opportunities to develop the characters in both their official and domestic roles. Investigation is methodical, and when the routine seems to be getting a tad tedious, some plausible action occurs to break up the pace. One irritant broke up the mood for me, disrupting my identification with the lead characters: changing points of view. It’s one of the things I don’t like about McBain’s novels. Too many heads to be inside, especially if they’re villains. I did get to like the three main cops and their procurator, a devout, workaholic Communist woman with an ailing heart.


Thinking the series was going to end after a second outing, Kaminsky says he considered killing off Karpo, the Spock character. “In the first of several drafts of Black Knight in Red Square, Emil Karpo is killed. My editor and agent liked the character so much that they persuaded me to let him live.” He notes that McBain considered killing Steve Carella, his central character at the start of the 87th Precinct series. Fortunately for both series, the authors changed their minds.


Kaminsky tells of the trouble he had getting his Porfiry Rostnikov series off the ground at all. “I liked what I had done. My agent liked what I had done. However, no hardcover publisher liked what had been done so the book came out as a paperback original. Death of a Dissident was submitted to the publisher and accepted almost a year before it was published. [It] suffered the fate of most paperback originals: no reviews.” Well, here’s one—better late than never, no?