Amberley Cowden is found dead the morning of his twenty-first birthday, the day he inherits a million dollars. A Gypsy finds the body on a beach near the hotel where Cowden had checked in shortly after midnight with a gaggle of relatives who are now in line at the legacy trough. His younger sister's first in line. Hmmmm. 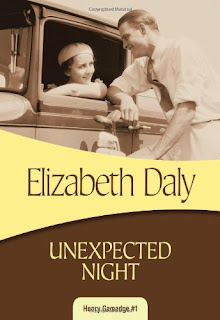 Here's what we know: Unexpected Night is Elizabeth Daly's first novel. She was sixty-one when it was published in 1940. This apparently puts it in the category of a classic golden age mystery, which means the detectives are faced with an unimaginably complicated whodunit-and-why puzzle. So are the readers. Unfortunately I'm not so keen on puzzle mysteries, which strike me as more than a tad gimmicky, and, slow and inattentive as I tend to be, am often bewildered by the crudest and simplest of gimmicks. Unexpected Night left me gasping so desperately I came dangerously close to hyperventilating. And not only from just the plot. The aspects of a novel that interest me most are voice, character, and mood. These work best for me when they merge into a narrative point of view. I prefer crime novels that put me inside or in close proximity to the detective's mind, or that of his loyal sidekick/biographer. It even worked for me identifying with the victim in Patricia Wentworth's In the Balance. For me the so-called universal viewpoint in this kind of genre novel is too impersonal, too thin and distant. It was my main problem, above and beyond its maniacal puzzle plot, with Unexpected Night.


Making allowances for this being the debut novel of a 16-book series of which I've yet to read any of the rest, I enjoyed the mysterious, atmospheric beginning, four of the central characters driving through a foggy Maine night from somewhere to a rendezvous at a cabin where four other central characters are playing bridge. Right away, though, the too-many-characters flag went up and I knew I'd have to start concentrating on who was who and how they were related to one another. Daly sets the picture by providing essential data soon as they're all together in the same room, but for me it was still a tad daunting trying to digest who were siblings and who was cousin to whom and which aunt was the loony toons, and which stiff ass was the colonel and which the lieutenant, and then there was Henry Gamadge, described only as a "guest from the hotel."


Of course from the cover I knew this was a Henry Gamadge mystery, and from crime writer Sarah Ward's blog I learned the early editions of Daly's work contain this "potted" bio of her detective: Henry Gamadge is an intelligent, well-educated upper-class New Yorker who is an expert on antiquarian books, maps, prints and autographs. He lives in New York’s fashionable Murray Hill district and although ostensibly working as an expert on old papers, he often undertakes investigations connected to his work.


And, in Unexpected Night, we learn Gamadge "wore clothes of excellent material and cut; but he contrived, by sitting and walking in a careless and lopsided manner, to look presentable in nothing. He screwed his grey tweeds out of shape before he had worn them a week, he screwed his mouth to one side when he smiled, and he screwed his eyes up when he pondered. His eyes were greyish green, his features blunt, and his hair mouse-coloured. People as a rule considered him a well-mannered, restful kind of young man; but if somebody happened to say something unusually outrageous or inane, he was wont to gaze upon the speaker in a wondering and somewhat disconcerting manner."

As to his detecting skills we don't really find out until a murder inquest when he sums up all of the "evidence" he and apparently only he (and perhaps the well-experienced and uncannily astute reader) has noticed and logged in his head along the way. I suspect a possible pyschic influence at work in persuading Mitchell, the state police investigator called in by the local sheriff to look into the young heir's death, to turn over pretty much everything to Gamadge, agreeing enthusiastically with his every suggestion and allowing him to order people around and arrange for deputies to do whatever he feels they should do. Mitchell's role is little more than Gamadge's assistant. Only one person challenges Gamadge, and that's near the end. The attorney representing one of the two families at the inquest, who, after some initial harumphing, is soon on board, agreeing with Gamadge's presentation of the circumstantial evidence, staring agape with everyone else as the murderer confesses during the inquest, congratulating Gamadge on his brilliant detective work, and offering him the job of chief investigator and emeritus senior partner in the attorney's silk stocking New York law firm. (Part of the previous paragraph is intended as humor, a gratuity for those experienced and astute mystery readers who love to parse out and savor such anomalies for their private amusement. In keeping, I hope, with the occasional nugget of genuine humor I, somewhat less astute than most, found leavening the ubiquitous chittery chattery intercourse among the characters. I include a couple of thigh-slapping examples below, both of them uttered by Henry Gamadge:)


“What is this business of yours, Mr. Gamadge?”


“It has no name. But if somebody wants to sell you a rare old pamphlet about Nell Gwyn, with Charles the Second’s autograph on the flyleaf and marginal notes by Louis the Fourteenth, I’ll perhaps be able to tell you whether it was made later than 1900, and what part of Michigan it came from.”


"Gamadge remarked: 'I should have said there was nothing terrifying about Mrs. Barclay but her opening four bid at bridge.' ”


One observation that's stuck in my craw is the golf ball driven from afar by someone unseen that comes within a hair of hitting the teenage potential heiress smack on the head. Gamadge insists this was no accident. I've done a little golfing in my salad years and I would be willing to bet a Dreadnought 3 ball autographed by the great Australian golfer Walter Hagen himself that not even Hagen could be so accurate with a 100-yard drive if his life depended on it. I consider this scene something of a stretch on Ms. Daly's part—actually, enough of a stretch to elicit from me something of an almost audible harumph. 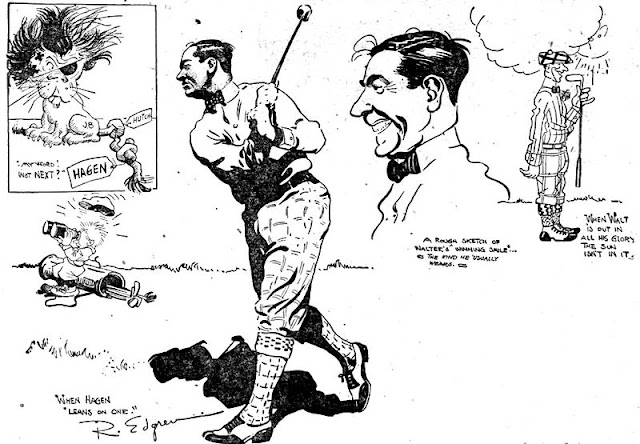