I've just finished reading Joe Kapitan's second fiction collection, Caves of the Rust Belt: Ohio Stories, and am virtually paralyzed with admiration. My reactions whirl at an unfathomable depth. Occasionally I have to remember to breathe. But my fingers still work, being less emotional, and are doing my thinking on the keyboard. 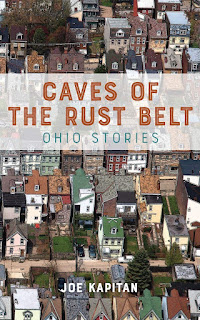 Kapitan is sneaky. A startlingly inventive wordsmith with a plain voice, innocent of the conventionally snarky tone so many young writers affect to advertise their cleverness presumably distinct from the herd. He seduces you to lay aside conditioned “smarter than thou” defenses, drawing you into a seemingly familiar narrative until of a sudden you’ve no idea just where in hell you are, where he’s taking you. This happened time and again when a story already was moving too fast for me to jump off with an oh, this is just too damned weird shrug, and find some Kafka or Lovecraft to calm the nerves.
His seduction starts at the get-go, with words like Ohio and Rust in the title. I heard earnestness there, the clang of labor, hard times, solid heartland humdrum. And then Caves gave me a peek at something unexpected beyond the abandoned factory’s dusty window. A hint of promise, teasing. Beckoning. Eyes wide, curiosity tugging my sleeve, I entered.
Well...Willie Wonka’s chocolate house Caves of the Rust Belt is not. Closer to a step through the looking glass with Wondering Alice. Moments of mystery appear in the commonplace and segue slyly from clever to profound. Involuntary chortles continue to burble from my throat with recalled abrupt comic ironies and turns of phrase, a particular the bawdy chanty gently redacted by dead mariners in deference to the boardinghouse landlady who summoned them from the depths hoping to find her lost son:
Hers is the reason we set out to sea,
And hers is the reason it burns when we pee,
And these are the three things we know to be sure:
A sailor needs tailwinds and whiskey and hers!”
Flashes of brilliance dance among steadier, darker reflections, challenging readers to accept life’s marriage of opposites with its attending happenstance and heartfelt yearnings. Though surprise is a constant in Caves, an occasional story’s title alone reveals enough for either laughter or gravity to cue up at the start. Most often each are in play by the end. Brothers of the Salvageable Crust is one of these. I had no idea what the title means (and still don’t), but somehow it suggested that I pee before reading and avoid sipping a hot beverage during the narrative. Trusting my intuition thus saved me from scalding pain and incontinent shame.
I’m not going to mention every one of the twenty-eight tales in this collection, despite how truly amazing each of them is. In the words of one of our most ludicrously quotable modern Presidents, it wouldn’t be prudent. I won’t be able to sleep tonite, however, if I don’t mention one of the most jaw-droppingly startling, sweetest little pieces I have ever come across. It is titled Mr. Foreclosure. And that is all I shall reveal. If you read nothing else in Caves of the Rust Belt, please please please...Mr. Foreclosure!
Oh, my, yes, and this one (do not be misled by the seemingly silly title—this piece is a definite contendah!): What We Were When We Drew What We Drew. Read it, or I’ll unfriend you forever!
You can skip How Cold Wars End. NO! WAIT! JUST KIDDING! (read it, but use the same precautions you do with Brothers of the Salvageable Crust).
Have tissues nearby when you get to Letter from a Welder’s Son, Unsent. Just in case...um, salt gets in your eyes.
My favorite of them all? That is a really rotten question, but right up there among the top twenty-eight is The Basic Problem with Interior Decoration. I think it’s the longest, too, although the astoundingly brilliant Brothers of the Salvageable Crust stretches out a tad, as well.
I suppose it might aid my credibility were I to use some of the standard critical literary language in discussing this collection, but I’m so uncomfortable with linguistic sophistication I’d likely get some of the requisite terms and phrases ass backwards, doing more harm than good. Maybe Michiko Kakutani can be lured out of retirement to do the honors. I’d kiss her feet if I thought it would work. Caves of the Rust Belt deserves no less.
Clicking over to Joe Kapitan’s Amazon.com page you’re apt to see references to Rust as his “debut” collection. That is a lie. His brief bio there tells us he published an award-winning short-fiction chapbook in 2013. “He began writing short fiction and creative non-fiction in 2009, and has had more than 60 pieces appear online and in print in such venues as The Cincinnati Review, PANK, Wigleaf, Midwestern Gothic, Smokelong Quarterly, Booth and Notre Dame Magazine.”
“Ohio,” he tells us, “is like that weird uncle with the cheesy mustache and outdated clothes; the one who always has the best stories.”
And now we know where “weird uncle” gets those stories.