THE LAST DAYS OF BLACKBEARD THE PIRATE – Kevin P. Duffus

Those of my beloved readers who might be growing a tad concerned at the embarrassing delay of my promised novel, the one with the aspect of Blackbeard's mysterious treasure in it, which suffered a setback last year with revelations by Scottish historian Angus Konstam that only in fiction did pirates bury their ill-gotten jewels, doubloons, and pieces of eight, should know the sea’s most notorious blackguard has tossed another belaying pin into the works. Arrrrrrrrrrr, as neither Edward “Black” Beard nor any other of history’s several thousand lessor known seagoing brigands ever said—despite what the movies would have us believe. 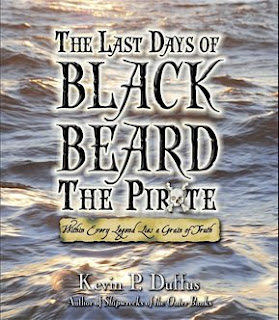 There. In the spirit of piratehood I’ve already stolen the most dazzling diamond in Kevin Duffus’s chest of treasures hidden in plain sight as The Last Days of Blackbeard the Pirate. Ordinarily I wouldn’t divulge spoilers even at the risk of being forced to walk the plank (another likely piracy fallacy, although I, shiver me timbers, would not be averse to doling such punishment to anyone daring to give away the ending of any of my novels). But Last Days is not a novel, although reading like one it fully affirms a paraphrase of the adage that journey trumps destination, especially if you’ve seen the movie and know the “surprise” at the end. Yes, Kevin Duffus, historian/filmmaker/author, has proven to me and should to anyone willing to accept narrative written in the non-academic-preferred (sniff) active voice that the 18th century nautical rogue known by less rigorous historians unanimously as Edward Thatch or Teach of Bristol, England, was in fact the son of James Beard, a prominent Bath, North Carolina landowner.


Edward Beard did grow a black beard. That much by all accounts is true. But the infamous nickname, attributed to a victim’s account that ended up in a newspaper, probably was coincidental. Beard himself adopted the “Black” to his name in memory of his pirating mentor, Sam “Black” Bellamy, who died in a shipwreck, Duffus argues. And the Beards were from Scotland, where another nationally known rogue of that period, Rob Roy MacGregor, was called “Red” by many. Once Duffus reveals this conclusion, his narrative subsequently switches from the “Blackbeard” sobriquet to “Black Beard.”

Duffus bases his arguments on exhaustive, meticulous research, including trips to England, where he walked the streets on which local lore has Edward “Thatch” growing up, and Philadelphia, where Duffus suggests Beard’s father sent him to be schooled and from which records have him shipping out as a commercial seaman before his pirating days began. The name “Thatch,” which doesn’t appear in any Bristol records, according to both Duffus and Konstam, most likely was shortened from “Thatcher,” commonly found in Philadelphia, and adopted as a seagoing pseudonym by young Beard as was customary of apprentice sailors. And, of course, due to dialects and the lack of any standard dictionary in the early 1700s, “Thatch” easily became the “Teach” that appeared as the pirate’s “surname” in documents and popular accounts.


Duffus establishes solid credibility with diligent examination of every scrap of possible evidence, by him and three genealogists--John Oden, Allen Norris and Jane Bailey. The four, working independently but cooperatively, scoured property deeds, wills, and lawsuit records, tracking down Beard, his relatives, in-laws, and neighbors. Tedious as this work must have been, Duffus transforms the search for truth in a narrative that sparkles with suspense and accumulated revelations. “Reverently, I carried my containers of documents across the room, weaving among dozens of desks occupied by other researchers engrossed in their own mysteries,” he says of a moment in the National Archives of Great Britain, containing historical records that include “William the Conqueror’s Domesday Book, the Magna Carta, the treaty ending the Hundred Years War, and Shakespeare’s last will and testament.
“Back at my table and following a familiar procedure, I gently removed the documents from their boxes, unfastened the cloth bindings and began my descent into the mist and mysteries of the past.” What he finds astounds him: “Suddenly, all of the annoying, ambient noises of the reading room of the archives fell silent as I sat in my chair, stunned, incredulous— and amused. I had been there.”


He was reading a handwritten report by Royal Navy Capt. Ellis Brand who commanded the February 1719 expedition from Virginia to North Carolina’s Outer Banks that concluded with the death of Edward “Black” Beard:


I have been a sailor myself for nearly 40 years and have sailed the Atlantic waters off North Carolina’s Outer Banks and throughout the tidewater region and tributaries of the Pamlico Sound--[...] In fact, for many years I docked my boat at Bath, not far from Blackbeard’s favorite landing, and made the trip between Bath and Ocracoke more times than I can remember in weather fair and foul. Had I been Lt. Maynard, I would not have spent an uncomfortable night in the ocean just off Ocracoke’s beach. I would have sought a safer, more placid and less exposed anchorage inside of the inlet. There were plenty of places to anchor without having to crowd the pirate and his friends.


Which is, in fact, exactly what Maynard did. History has been in error. Maynard dropped anchor on the soundside of the inlet. And what’s more, he didn’t even directly arrive there by way of the ocean. I could hardly believe what I was reading.


A more egregious error—laughable in retrospect—involves what became of the fifteen men arrested for piracy after Beard and most of his crew were killed. Historians have claimed the prisoners were taken to Williamsburg, where two were pardoned and thirteen hanged from gibbets spaced along what is now Jamestown Road. Their dangling bodies were left to rot. Since reading Angus Konstam’s description of this mass execution I wondered every time I drove that road where in fact the gruesome gibbets might have been. Turns out they were never in Williamsburg. Only six pirates were put to death, all of them hanged “at the mouth of the Hampton River,” Duffus writes.


One of the men historians long held had been  hanged, Edward Salter, returned to Bath and became one of the colony’s wealthiest landowners, helping to found what is today the state’s oldest standing church. Duffus hints that maybe Salter kick-started his fortune with some pirated gold Beard may have stashed secretly in Bath.


Unbeknownst to Duffus until he got lucky in a Pitt County, N.C. deed book, it was Salter’s granddaughter who led him on his odyssey of several decades to discovering what is almost indisputably the true identity of “Blackbeard the Pirate.”


As a young man living in eastern North Carolina, he’d been intrigued by a legend the infamous pirate had visited a sister named Susie in the area. Alone, Duffus went to the wooded, overgrown place where “Sister Susie” was believed to be buried and where the legend also claimed pirate treasure was buried. Duffus found plenty of evidence that treasure hunters had visited the site. He tripped in one of their holes and, peering in, found himself staring into the eye sockets of a human skull. He also found the gravestone of a Susanna White, but according to the inscription engraved on the stone, she was born 37 years after the notorious pirate’s death. Wondering who Susanna White was and how she might have been connected to “Blackbeard” led him down the long and winding road to Edward Salter and to Edward “Black” Beard and Beard’s real sister, Susannah Beard Franck.


So what now, for the “Blackbeard” element of my novel-in-progress? No pieces of eight, no Thatch, no Teach..but wait--there is something, by jiggedy! Something even better than doubloons on a dead man’s chest. Yes, indeedy. Umm, you don’t think I’m gonna let that parrot out of the bag so easily, do you? Yo ho ho. You can read The Last Days of Blackbeard, and if you study it closely enough you just might find the map. Remember, though, I got there first. Maybe I moved the X!