Once I'd learned the title of Susan Pare's latest novel I knew I had no choice. Even were there a choice I knew nothing could keep me—wild horses, world war, the Zombie Apocalypse—absolutely nothing could keep me from reading The Mayor's Son. You see, not only was the book's title something I'd heard aimed derisively at me throughout my adolescence, the book's author and I attended the same high school. Susan was three years ahead of me. I did not know her, but I recall her younger sister dated my cousin, and younger brother knew my sister. I remember Susan's older brother as the local newspaper's photographer, capturing dynamic images on his huge Graflex camera at our school's athletic events. He appears in the same role in the novel as “Kirk Peary.” 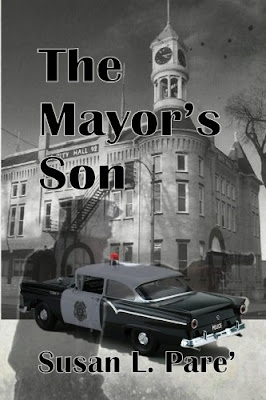 Columbus, Wisconsin, was (and remains) a small town. What I had to worry about, knowing Susan writes crime novels (one of which I'd reviewed a year or so ago), was how much did she know about me and might she be getting even for my Amazon review of A Bad Week in Hollister (I recalled liking the book, but was afraid to check back in case my words weren’t as flattering as some authors—all, in fact—prefer to see for their efforts.) I had to worry if Susan made me the villain or the victim in The Mayor’s Son.
I’m relieved to report I don’t think she had me in mind while creating any of the many characters in this nail-biting tale of prostitution and murder in our little hometown, albeit set in a year my father was in fact Columbus’s mayor. True, Pete Drollstrom, son of the novel’s mayor, is a grade-A jackass, and true, your reviewer surely had his jackass moments back then and later (even now!), yet...but I intend not to give anything away here. No spoilers, if I can help it. But here’s one of my favorite scenes, one of several fantasies Police Chief August Austin (our real chief back then was Ariel Austin) shares with us as he regards his least favorite officer:
Chief Austin stared back at Pete, stepped back a few feet, slowly pulled his gun out of his holster, and aimed it at Pete.
Pete’s face turned white, fear written in his eyes. “What do you think you’re doing?” he asked Austin. “You know better than to aim a loaded gun at someone.”
“I do know that,” Austin said softly. “Unless, of course, you intend to use it.”
“You’re bluffing. There’s no way you’re gonna shoot me. Now, put that gun away or I’ll have my dad fire your ass,” Pete stared up at Austin. “This isn’t funny, Augie.”
“That’s Chief Austin to you. And, you’re right. It isn’t funny,” Austin said, as he pulled the trigger.
Even when it became apparent the eponymous mayor’s son’s jackassery was most likely not a reflection on me, I was unable to completely relax my vigil as familiar name after familiar name appeared on the myriad other characters—good, bad, and neutral. Mine—whew—was not among them, but a couple had been good friends. These were just the last names, and yet even seeing those in print opened windows on the past, letting in nostalgic breezes that carried scents, faces, and voices from long ago. On a whim I dug through unpacked boxes of my books until I found our 1957 high school yearbook. They were in there, the seniors, most of the names in The Mayor’s Son. They were Susan’s classmates.
Mixed with the profound relief at not finding anyone in the novel who I thought resembled me in the slightest (even the good guys), and being transported in my mind back to the misty, tender days growing up in my birthplace, was the pleasure of reading a good story. The Mayor’s Son is a well-paced, suspenseful drama, but, at least to me, believable only as fiction. I spent many hours fishing and clamming with Glenn Lange along River Road in the Crawfish River, where one of Susan’s corpses is found. I spent a summer home from college packing cartons at Stokely Van-Camp’s canning factory, behind which police conduct the search for clues to one of the novel’s killers. Bought many a bag of popcorn at Hasey’s Wagon, under which another fictional corpse turns up...
I’m sighing now. Time carries us continually farther from such days with each passing second. Columbus seems idyllic in my memories, and it was, despite the horror you imagined, Susan. But thanks.
– the real mayor’s son.