I might have wept from the disabuse BLACKBEARD: America's Most Notorious Pirate heaped on me were it not that pirates didn't weep, and I usually find myself unconsciously emulating characters in books I'm reading. Although they did not weep, which is not counter intuitive, pirates were not cutthroats, which is, as suggested by their fictional counterparts. Nor did they say “Arrrr” or “Shiver me timbers,” iconic piratical exhortations introduced by actor Robert Newton in his title role of the 1952 Hollywood film Blackbeard the Pirate. 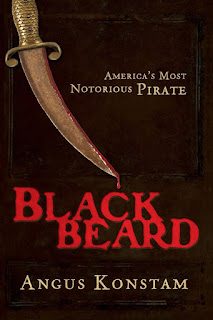 Most disheartening for me in this illusion-puncturing, meticulously researched account by Scottish historian Angus Konstam was that real pirates did not bury treasure! I selected the book to help with research for a mystery novel I'm writing inspired by a local legend that Blackbeard buried a chest of valuables on a small island in a creek about ten minutes by foot from a house I once owned. Not whining here, but clearly the debunking of my plot idea was, if not a weep-worthy setback, one that might have merited reading no further, chucking the book and administering a brutal tweak to the raison d'être of my novel.


The first and second steps I did not take. Konstam's Blackbeard was much too interesting to abandon, and so, rapt, I read it through to the thicket of end notes, bibliography and index entries. As to my novel, its plot is still under construction, but be assured Blackbeard will figure into it somehow. His is truly a fascinating legend even a remote proximity of which would contribute a layer of exotic intrigue to any story.


Edward Teach--or Thatch or Thach or Thatche or Tatch, depending on which of the early 18th century spelling variations available in documents at the time one prefers—likely was not the murderous monster of mayhem fictional accounts have made him out to be. Konstam was unable to find any evidence Blackbeard (the moniker suggested in a deposition of a merchant marine captain the pirate captured early in his frightening career) ever personally killed or ordered anyone slain. But he certainly scared the hell out of people and indeed earned unequivocally Konstam's description “America's most notorious pirate.” Dec. 5, 1717, the moment of Edward Teach/Thatch/Thach/Thatche/Tatch's metamorphosis from simple pirate captain to one of the greatest villains the human imagination has conjured:

Henry Bostock wasn’t having the best of mornings. His sloop the Margaret wallowed in the swell, while a cable length (200 yards) away a large, menacing pirate ship lay waiting for him, her gunports open. Wisps of smoke told him the gunners were ready, lengths of burning slow match held in their fists. Jeering cutthroats lined the rail of the larger vessel, and the taunting continued as he clambered down into his sloop’s tender and gave orders to be rowed toward his tormentors. By way of diversion he would have cast his experienced eye over the pirate ship as she loomed over him. She was clearly French-built, with fast lines and a sleek appearance, a little like a naval frigate. She had already been pierced for two dozen guns, but her hull showed evidence of more recent alterations: extra gunports were cut into her gunwale and beneath her forecastle and quarterdeck, both of which had been cut down slightly, creating a flush deck fore and aft.


Grinning faces looked down on him as he clambered up the frigate’s side, and rough hands hauled him up the last few feet onto the pirate deck. It was then that he saw him. Standing before him was one of the most frightening men he had ever clapped eyes on, a devilish-looking figure with wild eyes surrounded by even wilder black hair. The pirate’s beard was long and unkempt, plaited and hanging down over his chest. The same unkempt hair seemed to surround his face, and more plaits stuck out on either side of his face. Surprisingly, the ends of these rat-tailed black plaits were tied with twists of ribbon, which only seemed to make his appearance all the more disconcerting. The man was dressed in a long sea captain’s coat, crossed by two belts— a sword belt and a bandolier— while three brace of pistols hung from improvised holsters over his chest, making him look like a walking armory. Despite the winter sun of the Caribbean, the man wore a small brown fur cap, of the kind commonly worn by seamen in cold weather, and beneath it, as if to complete the whole devilish image, two small lengths of slow match poked out and hung down behind each ear, the tips of the impregnated rope glowing red and smoldering, with wisps of smoke framing the pirate’s head. As if all this wasn’t alarming enough, there were the eyes— the manic, staring eyes that glared at him from behind the hair. Henry Bostock had just met Blackbeard.

The pirates held Bostock and his crew prisoner for eight hours, eventually setting them free. This took place off Crab Island near Anguilla. Bostock's subsequent statement to the governor of Barbados provided the first known description of the pirate captain, and gave him the name that would sail with its Jolly Roger myths into the ages: “The Captain by the [name] of Capt. Tach … was a tall Spare Man with a very black beard which he wore very long.”


Blackbeard's career as a pirate lasted about eighteen months, probably less time than it took his beard to grow so distinctively long. Despite its widespread, enduring notoriety, his career as a buccaneer was hardly the most successful of those who preyed on merchant ships throughout the century's first two decades, known as the Golden Age of Piracy. Most pirates, including Blackbeard, had segued into the black-flag vocation from doing the same thing legally as privateers, seizing enemy vessels during times of war under authority of their country. Their seagoing lives without this authority was preferable to that on the merchant ships they seized, and they often recruited new pirates from crews of those same ships.


Records exist indicating that pirates governed themselves democratically, electing their officers and deciding common issues by vote. They won their plunder largely by intimidating bluff. Most of their plunder was the marketable cargo carried by the ships they seized and, occasionally, the ships themselves. They sold, traded or drank (if rum or wine) the stolen cargo, and rarely found any of the jewels and doubloons fiction has them burying in “a dead man's chest,” with pet parrots on villainous shoulders squawking “pieces of eight!” Their chief danger lay in getting caught, and many who did were summarily hung after token trials. Their chief threat was economic, but Colonial authorities, with little protection from the British Navy, regarded piracy more as an irritant than dire—until Blackbeard upped the stakes by blockading for a week the major port of what is now Charleston, S.C., choking off all trade.


His actions paralyzed the port, bringing maritime trade to a halt. While this caused a crisis in the colony of South Carolina, Blackbeard’s blockade had an equally dramatic impact further up the coast. At the time Blackbeard commanded several ships and several hundred men. With a force like that at his disposal he could repeat his success off Charleston anywhere else along North America’s Atlantic seaboard. For a brief period he became America’s bogeyman, and nobody knew where he would strike next.


Enter Alexander Spotswood, Virginia's colonial governor, who took this danger to task, and, despite the legal risk of “invading” the colony of North Carolina, where he knew Blackbeard was living apparently with a royal pardon from the governor there, sent a task force to put the pirate out of business for good. The task force did just that, and returned to Virginia with Blackbeard's nightmarish head dangling from the bowsprit of one of the two commercial sloops rented for the mission. Sixteen men captured from Blackbeard's sloop were brought back, as well, alive. They were imprisoned for three months in Williamsburg before all but one, who had been Blackbeard's prisoner, were tried, convicted and sentenced “to hang by the neck until dead, dead, dead.”


Spotswood granted clemency to another of the prisoners before the execution, which took place three days after the trial. Konstam suggests the lucky pirate, Israel Hands, might have escaped the others' fate by acting as a credible informant to the Virginia governor with legal problems that grew out of his North Carolina “invasion.” The fourteen others, including four African slaves who'd joined the pirates, were hung from trees or makeshift gibbets every half mile along a stretch of road from Williamsburg to the James River. Legend has Blackbeard's head rotting on a pole for several years at the James River port where the returning task force docked, with the skull eventually used as a drinking cup before ending up in a museum. The author says he viewed what was purported to be Blackbeard's skull as part of a traveling exhibit displayed at The Mariner's Museum in Newport News, Va.


Konstam suggests Blackbeard's grisly fate was more a result of his carefully crafted image than for anything he actually did. In reality, he was believed to be a literate man socially at ease in polite company and capable of persuasive charm when it suited him. In modern fictional portrayals, Konstam says, the character Jack Sparrow, played by Johnny Depp in the Pirates of the Caribbean movies, “was closer to the real Blackbeard than most fictional attempts to capture the...man behind the myth.”


Arrrr, I say to that, and shiver me timbers, and what the hell.