I've read The Late Monsieur Gallet, as promised two weeks ago, and have gone one more to give you another twin Simenon whammy with Maigret's Memoirs, one of the most amazing and entertaining examples of crime fiction craft I've ever read. 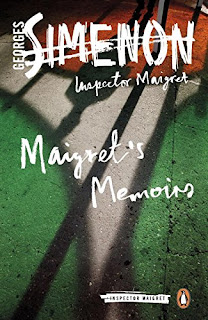 I almost skipped Monsieur Gallet after reading Scott Bradfield’s opinion in his NYT Sunday Book Review piece, The Case of Georges Simenon, that the earlier Maigrets were “rather gimmicky Agatha Christie-style whodunits.” But as I’d already downloaded the Kindle version beforehand, and as I have yet to read any Agatha Christies (I will, as I’ve promised my blogging friend Yvette Banek, the instant I’ve posted this report!) I went ahead and read it anyway. Bradfield was right. Monsieur Gallet is, in my opinion, gimmicky and implausible. I enjoyed it all the more, because Detective Chief Inspector Jules Amédée François Maigret of the Paris Police Judiciaire seemed as discouraged by Simenon’s awkward legerdemain as I was.
“At first the case had looked like nothing to speak of,” the French detective muses to himself. “A man who did not seem out of the ordinary had been killed by someone unknown in a hotel room. But each new item of information complicated the problem instead of simplifying it.”
And as the case drags on, we have no brilliantly deductive Sherlock Holmes here, nor even a plodding flatfoot methodically chasing down clue after clue after clue. We have, “The lack of progress in this case, circling round the lackluster and melancholy figure of the dead man, was getting Maigret down.” And here, in the hotel room where the victim died, where a forensic specialist has been working hours with superhuman concentration to decipher words on paper that’s been burned to ash, we see Maigret prowling around the room...”touching everything, dragging his feet, looking hesitant.” At last he sighs, ‘Listen, old fellow, I can’t take this any more! I admire you, but you don’t weigh as much as I do. I must go and get some fresh air.’
But then we know Maigret doesn’t operate like detectives in the more cleverly plotted novels He’s ruminative, intuitive, goes more by feel rather than deductive reasoning. This tends to work for him because sometimes the kind of clues and appearances other detectives focus on grate on Maigret like this: he “still had the same vague and annoying sensation, coming back again and again like a musical chorus: the sensation that everything touching on the death of Émile Gallet creaked, sounded out of tune and wrong, from the dead man himself to his son’s voice, and Tiburce de Saint-Hilaire’s laughter.” 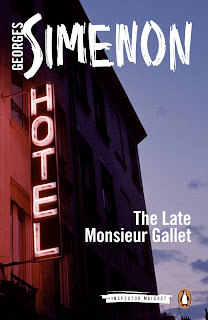 I should note at this point that dissonance ordinarily bums me out, too. But I hung in there with Chief Inspector Maigret because I figured if he could take it so could I. Too, while these novels not always sweet they are mercifully short. And I had what I knew would be a humdinger waiting in the wings.
Nearly halfway through what would become a 75-book series, Simenon had the brilliant idea of letting Maigret “write” his memoirs. Already completely intrigued by the character at this point, after only three novels, I stopped scanning Amazon’s list of Penguin’s reissued Maigret series and immediately downloaded Maigret’s Memoirs. “What fun!” I almost hollered in the public library’s Virginia Room as I waited for my Kindle app to open the book.
“I ran. I flew. I leaped for joy,” I felt like doing, as Maigret says he did on his way home from drinking with his new colleagues after his coveted promotion to the Special Squad. Maigret was, however...well, let’s let him tell it:
I was still at the foot of the stairs when I started the speech I had prepared for my wife. And on the last flight of stairs, I fell headlong. I did not have time to pick myself up before our door opened: Louise must have been worried by my lateness.
“Did you hurt yourself?”
The funny thing is that from the moment I got back on my feet, I knew I was dead drunk and it was a complete surprise to me. The stairs were spinning around me. My wife was just a blurred figure. She seemed to have at least two mouths and three or four eyes.
Believe it or not, it was the first time it had ever happened in my life, and I felt so humiliated that I did not dare look at her. I slipped into the apartment like a guilty person, completely forgetting the words of triumph I had so carefully prepared.
“I think...I think I’m a little drunk...”
My enthusiasm grew by leaps and bounds as I read this memoir of a fictional character whose unique feature is his wide-open mind as he works to solve cases—wide open to us but a monolithic mystery to the other fictional characters. Maigret describes this feature in Simenon’s words as the two of them discuss creating the novel Maigret out of the “real” one: “The public has to get used to you, to your outline, your walk. I think I’ve just found the word. For the moment, you’re still nothing but an outline, a back, a pipe, a way of walking, of grunting.”
As I am only at the ground floor of the Maigret series, having read just the first two besides a later one portraying the detective as a rookie, I’m wondering now if the fleshed-out version Simenon promises Maigret (I have to keep reminding myself this is all fiction) will become more than the beginning’s “grunting outline.” Somehow I doubt it. I don’t see how the character could become any more complicated than the one I’ve already read--of course, I’m now including this “self” portrayal, which the fictional Simenon tells Maigret is of necessity “truer than life.”
“The truth never seems true,” the author tells his character’s fictional model. “I don’t just mean in literature or painting. Do I even need to mention Doric columns? We think they’re absolutely straight, but they only give that impression because they’re slightly bent. If they were straight, our eyes would see them as bulging outwards.”
“Simenon” explains further: “Tell anyone a story. If you don’t organize it, it’ll be considered incredible, artificial. Organize it, and it’ll seem truer than life...making it seem truer than life, that’s the crux of it. Well, I’ve made you truer than life.”
Years later, as the series makes Maigret and his creator famous, Maigret points out to Simenon the growing complexity of his character has had an effect as well on the author. “Do you know,” Maigret says he asked Simenon, “with the years you’ve started walking, smoking a pipe, even talking like your Maigret?” 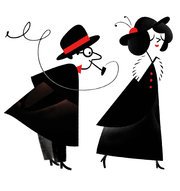 And he tells us, his readers, “Which is true, and which gives me--I hope the reader will grant me that--a quite delicious feeling of revenge.
“It is rather as if, late in the day, he was starting to think he was me!”
Maigret, perhaps in the interest of discretion for his creator and perhaps even for himself, does not mention Simenon’s reputed hedonistic habits, including at one point living in the same house with his wife and two mistresses. Maigret, as we know, is solidly (and solely) devoted to his loving wife, Louise.
Or so Simenon would have us believe.