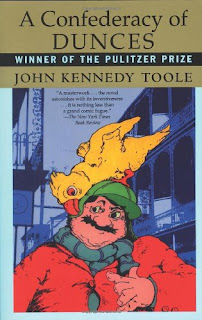 I continually laughed aloud, mentally gasping, my third trip through A Confederacy of Dunces, as I recall doing the first two times. But this time was a little different. I felt a kind of sadness riding along with the mirth and astonishment. It wasn’t just that I knew the story behind the Pulitzer-winning novel, that it didn’t get published until 1980, more than a decade after its author, John Kennedy Toole, had killed himself. I knew this the first two times, and probably felt a little sad about it then, too. Maybe the difference this time came from a closer reading of Walker Percy’s foreword, noting his mention of a sadness that might have come as well “from the tragedy at the heart of Ignatius’s great gaseous rages and lunatic adventures...”
Ignatius J. Reilly, the protagonist of this incredible novel, so famous today there’s a bronze statue of him in front of the Canal Street department store in New Orleans where the novel’s hilarious opening scene takes place. We meet Reilly and watch him provoke a situation that quickly gets out of hand. Impossible not to appreciate Toole’s masterful comic orchestration. Yet, the sadness Percy mentions seemed to hover all the while, almost hidden in the background. Ordinarily I can’t help identifying with protagonists in novels. I’d matured a tad since my last two reads of Dunces, which perhaps explains why now I saw another Reilly beneath the flagrantly brilliant buffoon of quixotic farce. A deeply pitiable Reilly. And some of my sadness I’m sure came from empathy with the fictional character because I share much if not most of the disenchantment with modernity that drives his rage.
At the same time I identify with central fictional characters I find myself wondering how closely they might serve as their creators’ alter egos. In Dunces it was easy to imagine Toole giggling and guffawing as he drew what Walker Percy said were perfect caricatures of archetype New Orleans denizens. And I imagined also some of Toole’s glee came from knowing his writing was spot-on, great even, and that the validation of literary success was awaiting him around the next corner. And my heart hurt for him, knowing as I enjoyed the fruit of his creativity and imagining his exuberance during the creation, knowing what lay ahead instead: the torturous frustration of waiting...waiting, until finally the inescapable crushing reality of failure.
Of the various ironies in this heartbreaking backstory, perhaps the crowning one is that the woman who obviously inspired a main supporting character, Toole’s manic mother, played a key role in getting Dunces published. Thelma Toole hounded Walker Percy until he read the manuscript, finding it “an incredulity: surely it was not possible that it was so good,” he wrote. “I shall resist the temptation to say what first made me gape, grin, laugh out loud, shake my head in wonderment. Better let the reader make the discovery on his own.”
As for this reader, the gaping, grinning, laughing aloud and...well, I’ve never shaken my head in wonderment, but I shall say straight out I executed the other three tributes at the very get-go:
A green hunting cap squeezed the top of the fleshy balloon of a head. The green earflaps, full of large ears and uncut hair and the fine bristles that grew in the ears themselves, stuck out on either side like turn signals indicating two directions at once. Full, pursed lips protruded beneath the bushy black moustache and, at their corners, sank into little folds filled with disapproval and potato chip crumbs. In the shadow under the green visor of the cap Ignatius J. Reilly’s supercilious blue and yellow eyes looked down upon the other people waiting under the clock at the D. H. Holmes department store, studying the crowd of people for signs of bad taste in dress. Several of the outfits, Ignatius noticed, were new enough and expensive enough to be properly considered offenses against taste and decency. Possession of anything new or expensive only reflected a person’s lack of theology and geometry; it could even cast doubts upon one’s soul.

Read that, and you know you’re off on one helluva weird and riotous romp—that is, unless you have trouble digging into a novel that doesn’t have a plot. But wait! Actually there are many plots, little ones, each character has his or her own little plot, and they all seem to be going nowhere, but, as Thelma Toole tells us in the hour-long film biop of the amazing Dunces saga—which you can load by clicking here--”they all come together in the end!” 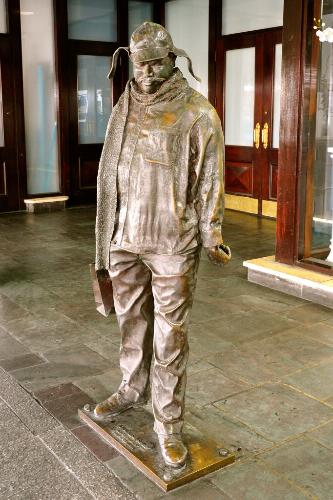 The supporting cast includes, of course, Irene Reilly, the long-suffering, insufferable mother; Patrolman Angelo Mancuso, a puny, sickly cop who spends most of the novel in various undercover disguises trying to “catch a character”; Myrna Minkoff, Reilly’s revolutionary, abusive girlfriend; and Jones, a young black “in whom,” wrote Percy, “Toole has achieved the near-impossible, a superb comic character of immense wit and resourcefulness without the least trace of Rastus minstrelsy.”
Here’s Jones as a costumed doorman supposed to lure patrons into the bar whose owner he hates and whose business he’s trying to sabotage:
“Whoa! Come in, see Miss Harla O’Horror dancin with her pet. Guarantee one hunner percent real plantation dancin. Ever mother-fuckin drink got a guarantee knockout drop. Whoa! Everybody guarantee to catch them some clap off they glass. Hey! Nobody never see nothin like Miss Harla O’Horror Old South pet dancin. Opening night tonight, maybe this be your one and only chance to catch this act. Ooo-wee.”
Maybe that’s the scene that made Percy shake his head in wonderment. It is possible I even shook mine a little, although I would hate to admit that here.
For years I held the misconception Toole committed suicide because no agent or editor would read his manuscript, which for some reason I assumed was written in pencil on cheap Big Chief lined tablets and smeared with stains from food and unthinkable other things. I’d been confusing Toole with his Ignatius Reilly. The real story is told in Joel Fletcher’s excellent account, Ken & Thelma, which explores the Dunces phenomenon before, during and after.
Toole wrote—on a typewriter--most of the novel while serving as an Army draftee in Puerto Rico teaching English to recruits. He sent the finished manuscript straight to the prestige publishing house Simon & Schuster. There the eminent editor Robert Gottleib read it and wrote to Toole that he loved it, but that it would need some editing. Toole complied, but the manuscript came back with more suggestions for edits. This went on for two years. Letters between the two in Fletcher’s book show how grinding the process was, but how steadfast Gottleib remained in defending the book. My impression now is that it simply failed to excite the marketing wing at Simon & Schuster. Too weird, maybe, too radical. Scenes like Toole’s erotic episodes in bed fantasizing about his dead dog Rex (maybe that’s what got Percy shaking his head—hell, alright, I’ll concede I might have shaken mine a tad at that point.)
Meanwhile, the drinking habit Toole tool developed in Puerto Rico grew heavy in New Orleans. The last time a girlfriend from his college days saw him, not long before his suicide, he was deeply depressed, she told Fletcher.
“It is a great pity that John Kennedy Toole is not alive and well and writing,” Percy wrote. “But he is not, and there is nothing we can do about it but make sure that this gargantuan tumultuous human tragicomedy is at least made available to a world of readers.”