A MOMENT ON THE EDGE: 100 Years of Crime Stories by Women – ed. Elizabeth George

I committed a crime a year ago paying a mere 50¢ at my public library’s used-book sale for an excellent copy of A Moment on the Edge: 100 Years of Crime Stories by Women. I take some comfort knowing my crime was shared by the library itself for letting this sterling anthology of exemplary fiction go for what would be called in the ironically apt vernacular “a steal.” 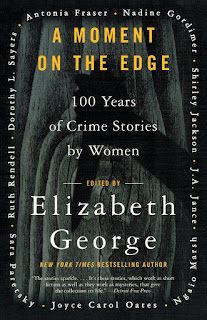 The book, one of hundreds piled on long tables stretching across the library’s community room and arranged in no recognizable order, caught my attention with the name of its editor, Elizabeth George, a top-tier crime fiction author. Aha, I might actually have muttered aloud, as crime fiction is quite definitely an area of particular interest to me. Closer scrutiny of the cover revealed some of the contributors’ names scrolled around the perimeter. A few were already favorites of mine, and others I recognized as long overdue to feed my insatiable appetite for good crime stories. Clockwise from the top: Antonia Fraser, Nadine Gordimer, Shirley Jackson, J.A. Jance, Ngaio Marsh, Joyce Carol Oates, Sara Peretsky, Ruth Rendell, and Dorothy L. Sayers.


With these august names reaching out for me I could not afford to dawdle long enough to open the cover for the other 17 contributors and risk missing out on other treasures among the other volumes tempting the mob of other insatiable bibliophilic appetites stalking the narrow aisles I’d not yet attempted to navigate. I therefore thrust the intriguing volume into my voluminous Friends of the Library canvas bag, eventually making my way to the cashier who relieved me of five bucks and change for a bagful of books the combined weight of which came near to dislocating my shoulder by the time I’d toted it out to my pickup and thence from pickup to apartment where they’re yet stacked on the floor, those anyway that did not find room in the three nearby bookcases.


A Moment on the Edge remains in a special stack next to my descendent of the favorite-of-Anthony-Boucher Morris Chair (which I had to Google after seeing its ubiquitous mention in The Case of the Baker Street Irregulars and to my delight learned of its ancestry to the recliner I’ve just this second named “Morris” in Mr. Boucher’s honor.) Ensconced thus in the privileged pile, A Moment on the Edge has served me faithfully female contrived crime fiction over the past year as the occasional cerebral aperitif, dessert, or nightcap. I should suggest a precaution regarding my most recent sampling of the anthology’s piquant offerings: Ms. Oates’s Murder-Two likely is not the most tranquilizing bedtime reading one might choose. But then anyone who knows Ms. Oates’s work knows she does dark so dark it can leave one wondering if light ever really exists (we’re speaking metaphorically here, as one might wish to leave the bedside lamp lit after inadvisedly reading Murder-Two while nestled between the sheets). I read it this morning, and might well leave my bedroom light burning throughout this night as a ward against awakening in the dark, sweat-soaked from a dream of coming home to find my beloved mother dead at the foot of the stairs, her head in a pool of black fluid.


“Squid ink”, teenage Derek Peck says is what it seemed like to him when he came home and found his mother in said circumstance. He’s horrified, in retrospect anyway. We’ve little doubt his horror is less for his loss than for the murder he’s suppressing. We strongly suspect this for two reasons. The first is that Ms. Oates loves to build suspense in the manner of a boa constrictor strangling its prey, wrapping muscular coil upon muscular coil upon muscular coil, squeezing and squeezing...you, the reader. She doesn’t do surprises. You see everything coming. Coming incrementally into focus, gathering definition in a maddeningly glacial pace.


The second reason we suspect Derek Peck smashed the back of his mother’s skull in with one of her golf clubs is that the story’s very first sentence tells us to: This, he swore. Yeah, right, son, the truth the whole truth and nothing but the truth so help you God uh huh. Oh, we know the little punk did it, and we know Oates will string it out as she loves to do, building building building. And this is no police procedural. In fact I don’t recall a police presence in the form of a character appearing at all. Everything takes place, as is Oates’s genius, in the characters’ heads. Essentially there are only two characters besides the mother-murdering punk: his brilliant defense attorney, who’d gone to school with the mother, and, we gradually see, hated her, and, we quickly see, is helplessly in lust with her client.


The other character? The mother, of course.

Oates’s sleight of voice moves with the slippery grace of a psychic viper through the living characters’ heads. Starting from an omniscient viewpoint, soon, quick as a wink, she has slithered into the head of the character she’s describing, becoming that character, and then back out again, and in and out, floating in through one eye and out the other. The way Robin Williams did with personae in his stand-up routines, only in writing—and there’s no laughter in Murder-Two.

When Marina Dyer was introduced to Derek Peck the boy stared at her hungrily. Yet he didn’t get to his feet like the other men in the room. He leaned forward in his chair, the tendons standing out in his neck and the strain of seeing, thinking visible in his young face. His handshake was fumbling at first then suddenly strong, assured as an adult man’s, hurtful. Unsmiling, the boy shook hair out of his eyes like a horse rearing its beautiful brute head and a painful sensation ran through Marina Dyer like an electric shock. She had not experienced such a sensation in a long time.


In her soft contralto voice that gave nothing away, Marina said, “Derek, hi.”

Her? The mother-murdering punk’s lawyer.