I was engaging another quirk of Nature's madness last week, daring coastal Virginia's hellish August humidity to throw its full weight against my chilled window panes, when a woman's voice rode in over the A/C's diligent thrum to startle me with something I'd never dreamed plausible about the man who invented the shock and awe style of print journalism known as Gonzo. It was the second day of my Hunter S. Thompson marathon, and I was playing a video biopic of the late batshit crazy "Raoul Duke" on my laptop. My eyes had drifted up from the screen to glare cruelly at the watery corpses of vapor smeared against the glass in my front door. The woman's voice jerked me back to sanity as I heard her telling me her late former husband had wanted so desperately to become a great writer he typed out F. Scott Fitzgerald's greatest novel "again and again so he could learn the music in it." 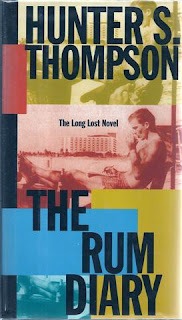 Talk about your shock and awe. I mean, music in Thompson's fear and loathings and rants and ravings? I'd never thought to look for it, but maybe something by Johnny Rotten or Ozzy Osbourne? They had yet to be born when Fitzgerald was writing. Did I need to go back and reread the fear and loathings and rants and ravings, shocking and awesome as I remember they were and maybe still are, a little, looking for glimmers of Gatsby? Was Thompson's first wife, Sandy, pulling my leg?


I'd celebrated the first day of my Gonzo marathon watching The Rum Diary, the movie based on a novel Thompson wrote pre-Gonzo, when he was 22, fresh out of the Air Force and working as a sportswriter in Puerto Rico. I enjoyed the movie, despite never quite buying Johnny Depp in the lead role (the one Bill Murray nails in Where the Buffalo Roam). Reading the novel The Rum Diary took up my third marathon day. And at last, there was music:

Like most of the others, I was a seeker, a mover, a malcontent, and at times a stupid hell-raiser. I was never idle long enough to do much thinking, but I felt somehow that my instincts were right. I shared a vagrant optimism that some of us were making real progress, that we had taken an honest road, and that the best of us would inevitably make it over the top. At the same time, I shared a dark suspicion that the life we were leading was a lost cause, that we were all actors, kidding ourselves along on a senseless odyssey. It was the tension between these two poles—a restless idealism on one hand and a sense of impending doom on the other—that kept me going. 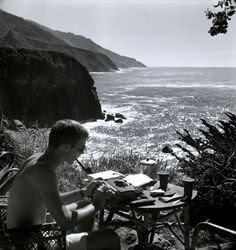 The narrator, Paul Kemp, has taken a reporting job at a crummy upstart newspaper in San Juan, Puerto Rico. Instead of a fresh-eyed 22 like his creator, however, Kemp is 31 and already feeling the toll age is taking on his vitality and his confidence. Thompson later admitted he'd started out believing he was writing a novel that would stand up to anything Hemingway or Fitzgerald had done. His confidence carried him and his manuscript to New York City where he landed a publishing contract from Random House. "It was unbelievable. I was a successful author," he said many years later in a taped interview, grinning with vestiges of the long ago thrill now mixed with the self-conscious irony of all that came after that euphoric moment in a tangential career that made him a different sort of writing celebrity.


Problem was, he went on to explain, Random House wanted revisions. He began the rewriting, evidently without the same enthusiasm he'd had for the original. Some five years later he abandoned the project when he hit pay dirt with his reporting on the Hell's Angels motorcycle gang. This resulted in a book, Hell's Angels: A Strange and Terrible Saga and a career road trip down which he never looked back--until the late '90s when Douglas Brinkley, his biographer, found the Rum Diary manuscript on a basement shelf with other Thompson archival materials. Brinkley says he and Thompson began reading the old work, both liked it, and soon plans were underway to finally have it published. It needed some cutting, which was done in marathon sessions with the author and editors at Thompson's Owl Farm in Woody Creek, Colorado.


Simon & Schuster published The Rum Diary in 1998. It's subtitle: The Long Lost Novel.


While the writing is more lyrical and reflective than Thompson's later adrenalin-whipped hyperbolic brand, Rum Diary's people are recognizable Gonzo characters: alcohol-fueled, violence-prone, lusty daredevils on the make and frequently on the run. The narrative moves through a series of maturely drawn scenes that can swerve from hilarity to horror at the drop of a bra or the thud of a boot to the gut. It may not be The Sun Also Rises or The Great Gatsby, but Thompson had no need to feel embarrassed for believing at 22 he had a shot at literary distinction. Had the Hell's Angels shut him out back then, freeing him to publish The Rum Diary instead of joining their "strange and terrible saga," he might well have reached that mark. Here's some more music from the almost lost Puerto Rican saga:

I grinned and leaned back in the seat as we drove on. There was a strange and unreal air about the whole world I’d come into. It was amusing and vaguely depressing at the same time. Here I was, living in a luxury hotel, racing around a half-Latin city in a toy car that looked like a cockroach and sounded like a jet fighter, sneaking down alleys and humping on the beach, scavenging for food in shark-infested waters, hounded by mobs yelling in a foreign tongue— and the whole thing was taking place in quaint old Spanish Puerto Rico, where everybody spent American dollars and drove American cars and sat around roulette wheels pretending they were in Casablanca. One part of the city looked like Tampa and the other part looked like a medieval asylum. 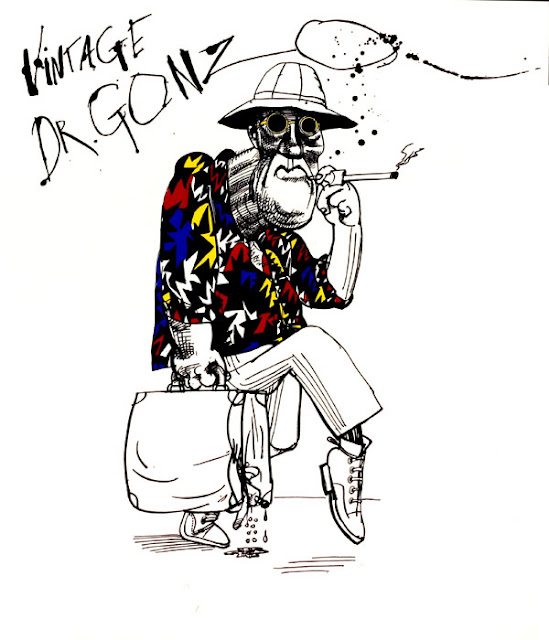