My lawyer dad loved Shakespeare. So far as I know his Bard thing extended only to the beauty and wisdom in Shakespeare’s poetry. I grew so accustomed to his dropping quotes here and there that years later in a college Shakespeare course certain passages I’d heard countless times growing up would leap out of some vaguely familiar context in a play I was reading and bring me to tears. They were tears of reunion and of discovery. I’ve found it to be one of the many wonders of Shakespeare that his brilliance, his intuitive depth and his sheer artistry teach me something new with every reading of virtually every line. 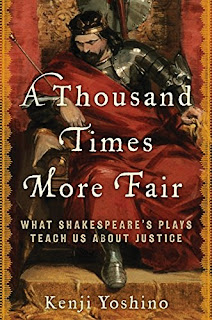 And I’m no Shakespeare scholar. Not by a long shot, not even a short shot. Never had the patience to learn the language much beyond those familiar passages I absorbed long ago. I learned a few more passages in the college course, along with some helpful interpretation and sense of story, of narrative architecture. But until I read A Thousand Times More Fair, I understand now, to pun a Joni Mitchell paraphrase, it was Shakespeare’s allusions I recalled; I really didn’t know Shakespeare at all.
I still don’t know him as well as I should, but a farside better now than before, thanks to Kenji Yoshino, a law professor at New York University, whose book, subtitled What Shakespeare’s Plays Teach Us About Justice, would have been the perfect gift for my dad, or would be for any lawyer no matter the extent of his or her wiliness or ruthlessness. Shakespeare shows us again and again with exquisite clarity just how effective wiles and a cold eye can be in the practice of law, as well as how a judicious capacity for mercy is needed to keep its application from being unreasonable. In his introduction to A Thousand Times More Fair, Yoshino disputes Mark Twain's argument that Shakespeare was a lawyer: “I believe Shakespeare knew a lot about the law, but only as a by-product of knowing a lot about everything.”
Yoshino chose law school after majoring in English as an undergraduate with an eye toward pursuing a career as a writer or a professor of literature, “because I wanted to acquire the language of power, for myself and for my causes.” But, finding his law books drier and more limiting in scope than he’d expected, he carried his regard for literature with him despite the advice of one of his law professors to put such “childish pastimes” away while learning to “think like a lawyer.” Yoshino contends that literature is a more valuable resource than cold theory, saying he “would rather deal with the messy, fine-grained, gloriously idiosyncratic lives of human beings than with vaulting abstractions.” Yet, he points out, the law contains timeless principles intended to serve as fair measures for determining and administering justice in a society of these real human beings.
As a professor he created what has become his most popular course—Justice in Shakespeare—because Shakespeare’s plays “contain practically every word I know, practically every character type I have ever met, and practically every idea I have ever had.” Not surprisingly the plays in his course, and in the book, raise issues that address timeless principles in the law. To illustrate this timelessness, Yoshino matches issues raised in the plays with comparable issues of today:


We submit to the rule of law to quiet private vengeance, giving the state a monopoly over all violence. Yet this means we must protect ourselves against governmental abuses of power. We do so by requiring that laws be written down and applied in standardized ways—that is what it means to live under “a government of laws and not of men.” But in every society, some individuals will be unusually adept at manipulating those words for their own interest. The fear and mistrust of lawyers is at heart a fear and mistrust of skillful rhetoricians.


The character Portia, in The Merchant of Venice, “represents a lawyer so verbally proficient that no law can bind her. There are three major legal instruments in the play—the will of Portia’s father, the notarized bond signed by Shylock and Antonio, and the marriage contract entered into by Portia and Bassanio. Yet Portia is able to manipulate each of these instruments to secure her own ends.”
“I initially admire Portia because only she can stop Shylock,” Yoshino says, but adds that ultimately “I wonder who can stop her.” He points out that “This concern about the rhetorical skill of lawyers both predates and postdates Portia. It stretches back to the original lawyers, the Sophists of antiquity, who took pride in using rhetoric to make ‘the weaker argument appear the stronger.’ And it reaches forward to speak in our times, when lawyers are feared and hated for our sophistry.”
His description of the Clinton-Lewinsky example of modern lawyerly sophistry enabled me at long last to understand the president’s seemingly absurd statement during a deposition in which he questioned the meaning of “is.” This came after a grueling series of attempts to pin Clinton down to an admission that he and Lewinsky had had sexual relations—attempts Clinton sidestepped with an agility astounding presumably to anyone who doesn’t “think like a lawyer.” Here’s how things got down to the “is” question:


Clinton still had some explaining to do. He had sat by in silence as his 1attorney in the Paula Jones deposition maintained that Lewinsky had filed an affidavit in which she said “there is absolutely no sex of any kind in any manner, shape or form, with President Clinton.” This statement would seem to be framed broadly enough to be irrefutably false, whether one took a layperson’s or a lawyer’s view.
Asked whether the statement was false, Clinton produced his coup de grâce: “It depends on what the meaning of the word ‘is’ is. If the—if he—if ‘is’ means is and never has been, that is not—that is one thing. If it means there is none, that was a completely true statement.” Clinton was relying on the tense of the verb “to be.” As he elaborated: “Now, if someone had asked me on that day, are you having any kind of sexual relations with Ms. Lewinsky, that is, asked me a question in the present tense, I would have said no. And it would have been completely true.”


But of course!
With this in mind, is it redundant to suggest that A Thousand Times More Fair is a great read for lovers of Shakespeare as well as for anyone studying law and society?