When I was in high school my dad ran in the Democratic primary for a state senate seat. I was his campaign manager. We didn't have any money and I didn't know what the hell I was doing, and we got the crap kicked out of us. If we'd had money we could have hired someone like Dev Conrad. I would have been out of a job but my dad might have had a fighting chance--even if someone had tried to murder him. 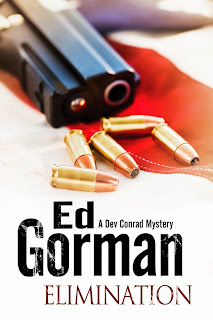 Dev Conrad's the kind of consultant you want running your campaign especially if the race is so hot people try to kill your candidate. He's an ex-Army investigator and a second-generation political op and, unfortunately, only a fictional character. But his creator, novelist Ed Gorman, himself a former political speechwriter and TV producer, knows the game and the milieu so well his main character could step straight out of the novel’s pages and take a seat opposite Hardball interviewer Chris Matthews.
Dev's also a political operative of the sort that would take some of the stigma from politics in a day when sleaze, suspicion and scandal have become the norm. Don’t get me wrong, he's tough enough, and wily to boot. Talking about the ops working for his candidate's opponent, he says, "They’d be telling the same kind of lies I usually did. Just earning their paychecks."
His self-effacing humor is a welcome grace. There's this: "God had personally given me a daily allotment of one hundred and twenty-three lies. I was, after all, in politics."
At the same time, he allows his pragmatism to take him only so far. He’s a decent sort. The filthy political arena is where he makes his living, and he is good at it, but there are lines he will not cross. It's his honoring these limits that ultimately makes Dev Conrad a man worth honoring. And it helps that he prefers to work for candidates of a liberal bent.
In Elimination, he's signed on to run the campaign of a congresswoman in a tight race for reelection. Her opponent is a yahoo with a stinking rich uncle who is pouring a fortune into the campaign to send the incumbent home. She's being bombarded with all of the standard right-wing accusations and threats, and this assault is shrinking her lead in the polls the way big money always buys the minds of the shallowest voters, who always also tend to be the loudest. And the most dangerous.

Two wingnuts even show up at a crucial debate carrying AK-47 military rifles. Dev's candidate kicks the pus out of her moron opponent in the debate, but someone takes a couple of shots at her afterward. She's uninjured, and the resulting public sympathy shoots her lead back up to a margin of safety that virtually guarantees victory. Then the local police chief holds a surprise news conference and claims a rifle has been found in the trunk of a volunteer worker for Dev's candidate.
Faster than you can say “turnaround” the poll gap quickly narrows amid widespread talk that the “assassination” attempt was staged, presumably by the candidate herself.
Dev Conrad's job now is to find out what really happened. Calling upon his old training as an Army investigator, he soon learns the police chief and a small group of his officers are dedicated supporters of the right-wing candidate, and have some secrets of their own.
Complicating things is the candidate's husband, a vainglorious womanizer who thinks he knows more about running a campaign than the professional his wife has hired to do it.
The action is taut, fast-paced and fraught with surprises.
Elimination is the fourth in Gorman's Dev Conrad series, which promises to enjoy a run at least as long as his ten-book Sam McCain lawyer/detective series. Then there's his Jack Dwyer detective series. Yes, it is safe to say Gorman is prolific. Award-winning, too. He's copped the Shamus, Anthony, Ellery Queen, Spur and international fiction awards, and has been on the short list twice for an Edgar and once for the Silver Dagger.
Am I a fan? Well, let's just say I sure could have used me some Dev Conrad advice when I tried to manage my dad's disastrous run for a state senate nomination back in the day.