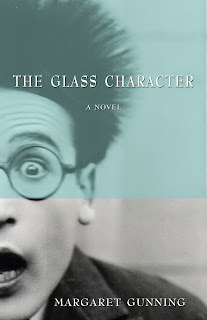 Might not be too late to flip The Glass Character from flop to fortune in one fell swoop simply by changing the title to Glass Girl. Sounds cynical, but I like to think it’s more the steak's-sizzle school of salesmanship. Implying of course ultimately one is selling the steak and that unless one is a charlatan one’s steak will live up to its sizzle. And if bacon happens to be the sizzle everyone wants, one perhaps should think twice about pushing steak. The hot sizzle in fiction right now is girl, and it’s been so for several years.


“Girls, Girls, Girls: The Buzziest Word in Book Titles” screams the headline in a July 17 Departure article by Elizabeth Siles. Its subhead: “The one word publishers can’t get enough of.” And this June piece in USA Today: “Book publishing goes wild for 'Girls'.” Even The New York Times declares its hip, albeit with more restraint, in this May head: “This Summer, Girls in Titles and Girls in Peril.” Stieg Larsson launched the burgeoning modern craze eight years back with The Girl With the Dragon Tattoo. Four years later came Gillian Flynn’s Gone Girl, followed in 2015 by Paula Hawkins’s The Girl on the Train. The five biggest U.S. publishers came out with 20 girl books that same year, and the figure has jumped to 30 this.


Margaret Gunning’s The Glass Character hit the bookstores two years ago. It’s barely been reviewed. Not even kicked around by the NYT’s literary executioner Michiko Kakutani. Had girl been in the title I can’t imagine anything stopping it from arriving on Maureen Corrigan’s desk and thence aired on NPR.


I trust it’s not too late for the disclaimer: The Glass Character is the only book ever in which I am honored with a dedication. Margaret Gunning, a Canadian author, and I, a Virginia scribbler, have been Internet friends for over a decade. I read an early draft of her novel and offered encouragement during the long arduous months she spent hawking the manuscript to publishers. We rejoiced when Thistledown Press, a boutique house in Saskatoon, Saskatchewan, bought the book we’d hoped would be Margaret’s break-out novel. It was her third. The first two—Mallory and Better Than Life—both published by small Canadian houses, had received excellent reviews but no widespread marketing. The Glass Character was a more ambitious project, built around the all-but-forgotten silent movie comedian Harold Lloyd. The title refers to his fake signature glasses, which he wore to set himself apart. So why title such a novel as if it’s about a girl? Because it is. You don’t think I’d try to sell you a sizzle without the steak! Here’s the review I wrote after receiving my special copy of The Glass Character:


Movie comedian of the silent 1920s. Called himself the "Glass Character" because his trademark glasses were fake. No glass in them. The guy was a nut. Blew one of his hands to Kingdom Come fiddling with what he thought was a stage prop bomb. It was real. Deliberately gave himself powerful electric shocks to get his hair to stand straight up. Did his own stunts--the clock dangle, the shocked hair, pretending to trip and stagger on building ledges up in the sky, netless--a brave, some would say foolhardy, genius. Nut. 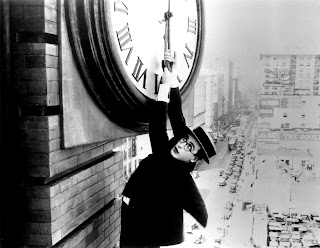 Knowing this and being acrophobic, I can't watch his movies anymore. It even scares me to look at the photos. I'll let Margaret Gunning watch the movies and look at the photos, and I'll read her reports. Well, then again, I don't have to anymore. I've read The Glass Character. It's all in there.


Margaret, poor girl, is in love with Harold Lloyd. It started out as just a fascination with soundless images. Love snuck up and struck her dumb somewhere amid the exhaustive research she was conducting for a book about what was then still just a fascination. Love. Alas. A happily married grandmother, Margaret is still far too young to leap the gap into the day when her beloved Harold held sway with the girls of a baby Hollywood. Fortunately, for her and for us, she's a novelist. She has the skill to weave the magic carpet to carry her backward in time to those days of yore, those Harold heyday days, and set her gently down along the path the love of her dreams must follow for there to be a rebirth in the imaginations and hearts of Harold Lloyd admirers evermore. She's woven that carpet. It's large enough to take us with her on that long strange trip. I rode along on a test flight. We made it back, and I'm still agog.


When we stepped off the carpet in la la land I saw that Margaret had changed. No longer the familiar author of two of my favorite novels--Better than Life and Mallory--she'd become sixteen-year-old Jane Chorney, a virgin and erstwhile soda jerk in Santa Fe, New Mexico, with a terrible crush on movie idol Harold Lloyd. Soon after we landed, Margaret /Jane (and later "Muriel", as you will learn) decided to pack up her meager belongings, cash in her chips (two cents shy of fifty bucks) and head to Hollywood and into the arms of her eternal love. I might have tried to instill sense in her were I anything more than invisible eyes and ears. Unfortunately I had lost my voice and corporeal substance upon alighting in the Santa Fe dust.


I won't say more. I took no notes and had to avert my gaze any number of times during moments that really were none of my personal concern. The Glass Character is Margaret/Jane/Muriel's story, not mine. What I did see and hear, and learn during our holiday in history is captured with such lucid, insightful poignancy I can't help but wonder if Margaret didn't in fact remain there, dictating her journal to a holographic image of herself in the distant future tapping on a keyboard somewhere in a place called Coquitlam, B.C.

So. Disingenuous to drop the The and the Character and add Girl without changing the novel even a wee bit? I don’t see why. Might Glass Girl sell a few more books and still have a chance to get read on NPR and maybe kicked around or, should hell cool down a notch, actually praised by Kakutani? Maybe get a movie deal? I don’t see why not. Wouldn’t hurt to try, I reckon.