YOU WILL KNOW ME – Megan Abbott

Megan Abbott doesn’t know me, and probably never will. Still, she owes me six hours of restful sleep. They were strange dreams I had last night. Not my routine searching-for-a-place-to-pee or getting-lost-in-a-building or trying-to-impress-my-father frustration scenarios. I shake those off soon as I'm awake and on my way to the bathroom. Nosiree, ma'am. These things last night were unfamiliar, deeply discomfiting, clinging dream fragments. Semi-conscious glimpses of something vaguely menacing. I can't recall any particulars, but whenever I woke, or seemed to be waking, I felt a presence near me. Hovering close to my head. A cold, mocking presence. And I was alone. No one to call out to, like Drew Knox did when he had his ghastly nightmares in You Will Know Me. 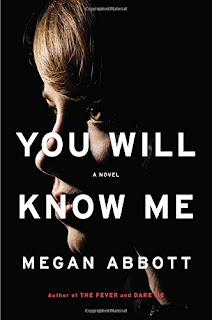 It was You Will Know Me, of course, disturbing my sleep. I'd stayed up late finishing it. Something I seldom do. Something I knew I shouldn't do with a Megan Abbott novel, but something I know I'll do again, and again, and again, regardless. Abbot casts a deliciously unsettling spell I am powerless to resist. It comes upon me incrementally, hints revealed in what seems a perfectly ordinary tableau. Faces I recognize and feel I know. Until I notice something different. An odd glint in the eyes, shadows that lie beyond my first impression. Words in an unexpected, inappropriate context.


The effect is cumulative, edging into my comprehension like a storm front blotting a sunny horizon. In You Will Know Me, Abbott reveals the suspicious cloud bank's nose at the very beginning:

The vinyl banners rippled from the air vent, the restaurant roiling with parents, the bobbing of gymnast heads, music gushing from the weighty speakers keeled on the window ledges.
Slung around Devon’s neck were three medals, two silver and one gold, her first regional-champion title on the vault.
“I’m so proud of you, sweetie,” Katie whispered in her daughter’s ear. “You can do anything.”
Later, Katie would come to think of that night as the key to everything that came after, the secret code.
But at the time, it was just another party, a celebration like dozens of others, all to honor their exceptional fifteen-year-old daughter.

Trouble ahead. Fair warning. And Abbott does play fair, all the way. The clues she scattered so artfully along the narrative create a random texture that now and then gave me the sense I was a step or two ahead of the main characters. Yet collectively these nebulous erratic whiffs of danger never quite coalesced into certainty. One thing, though, was for sure: a relentless encroaching unease weighting the air.

A large part of the fragility of my confidence in the appearance of things in You Will Know Me came from the woman whose viewpoint carries most of the story--Katie, mother of Devon, the teenage gymnast prodigy and focus of everyone's concern. I shared Katie's bias as a mom, which included misinterpreting or rationalizing initial signs that raised tiny questions about the way things seemed. I stayed with her as these signs mounted until I began to see, or think I saw, significance Katie was missing. Now it got tricky for me. I could see the true narrator--Abbott--was being sly, smooth as satin, playing with me as she led Katie, and then me, this way and that until I yielded to her mastery and simply hung on for the ride.

It helped calm me recognizing a couple of Abbott's ploys. She foreshadows by ducking back to an earlier time. The beginning, for example, gave me Katie already knowing how it all comes out reflecting how it all started. This happened several times, the finding clarity from a step or so back. I suppose it can confuse readers accustomed to strictly sequential narrative, but for me it helped bring into focus Katie's own attempts to understand what was happening as it unfolded around her.


While all eyes ostensibly were on Devon, a fascinating individual around whom the story centers with its theme of how far people will go, what they're willing to accept and to sacrifice in order to realize a dream, I found Devon's younger brother, Drew, the most interesting character. Both as a person and as the character that ties the story together. He's a brilliant, precocious little nerd. In some settings he'd be an obnoxious little nerd, and sometimes he was that here, too. But the obnoxiousness, I eventually learned, was in fact a gift. Drew is a little oracle. His nightmares had a prescience I found unnerving, especially as it eluded, even annoyed his family. At the same time I came to respect his outlook, his observance of detail, and his native savvy. I came to rely on the little guy more and more as niggling suspicions began to gather, merging, fusing eventually into a roar of revelation that assaulted my own ears.

"I could hear thousands of eyes watching us," gold medal Olympian Nadia Comaneci says in her book Letters to a Young Gymnast, a book Megan Abbott quotes from variously in You Will Know Me.

I know I'll never get back those six hours of sleep Abbott took from me, and in truth their loss was a small price for the return. The vital human questions she raised in this all-too-human story continue echoing for me. I hope they always will.
Posted by Mathew Paust at 1:40 PM