If Rodney Dangerfield played in a string quartet his instrument would be, disrespectfully of course, the viola. I wouldn’t have suspected this before I read Jane Lebak’s Pickup Notes because I knew precious little about the instrument—in fact nothing more than that it looks like a violin, only slightly larger. I assumed because of its slightly larger size its tone would be a tad deeper than a violin’s. Not sure I’ve ever knowingly heard one play, but now I know my assumption was on the money. What might have followed intuitively, had I given it any thought, was that because of this, because of its deeper tone, it is more a subtly supportive than a flashy solo instrument like the violin or the much deeper, more noticeable cello. Thus, in a quartet with two violins and a cello, the viola doesn’t get no respect, which would make it the butt of such inside jokes as How can you tell a viola is playing out of tune? The bow is moving. 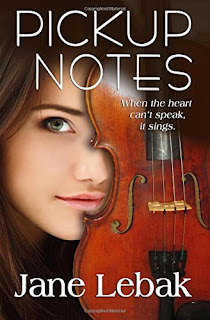 As readers we’re on the receiving end of an endless repertoire of these terrible jokes because Pickup Notes is a story told by a violist. Joey, which is short for Josephine Mikalos, not only gets dumped on routinely, if affectionately, as the Boroughs String Quartet’s violist, she’s the Cinderella of her biological family, which dumps on her without affection—with malice, actually. She’s a scrapper, though, so despite the understandably low self-esteem her station in life engenders, which includes dumping on herself, as well, we’re in her corner with a towel, a styptic stick and encouraging thoughts. And sometimes angry thoughts when we feel like shouting, KISS HIM, YOU FOOL! CAN’T YOU SEE YOU LOVE HIM?


Disconnect between heart and head is the subtext of this story, the novel’s viola, if you will. Lebak addresses it directly in a scene when the quartet members have reached the fortune-cookie coda of a rawly contentious Chinese meal.

A thousand days later, dinner ended with Harrison snapping open his fortune cookie. “Get this,
guys: ‘You are the crispy noodle in the vegetarian salad of life.’”

Josh said, “That should have been Shh...reya’s.”


Shreya intoned, “That is so deep,” and then read hers. “Your everlasting patience will be
rewarded sooner or later.”


Even I laughed. Josh’s said, “Pray for what you want, but work for the things you need.”


Harrison said, “Trust in God, but keep your powder dry.”

And I opened mine to find this: “When the heart can’t speak, it sings.”

The problem with music, with making it, is the need for heart and head to coincide. Technique alone is mechanical, and feelings without mastery of expression remain trapped or emerge feral. Making music professionally, which the Boroughs String Quartet does, playing for weddings, funerals, baby showers, retirement parties, and the like, requires a discipline that’s something of a stretch for anyone, especially musicians barely out of their teens. Their struggles with the demands of maturation as individuals constantly clash with the demands of maintaining their musical technique while blending as a group. Aside from their devotion to music it’s hard to imagine any four highly strung people as different from one another as these guys. I see now how truly a wonder it was the Beatles managed to stay together as long as they did.

Oops, we’re running out of space, and we haven’t even gotten to the solo yet, the main story, the flashy violin part, if you will. It did seem somehow right, though, that maybe the violas, the dumb blondes of the orchestra, should get a break. Anyway, what happened was, our quartet was playing at a wedding, doing its usual Mozart, Haydn and Beethoven numbers, when the drunken bride staggered up and demanded they play Hotel California. Eeek, went through the classicist minds of three quartet members. It wasn’t on their playlist. In fact, they had never played it. They protested, argued with the emcee. Joey tried to reason with the blustering bride, who grabbed the viola and hung on until Joey pulled it away. The guests were staring. And then Shreya, the second violinist, who’d developed her chops as a child busking for bucks on the street, stepped up and, as Paul Simon bragged to us about another venue on a day long ago, she blew that room away.


This marked a disputatious crossroads for the Boroughs String Quartet that came near breaking it apart. Its domineering leader, first violinist Harrison Archer, argued forcefully for incorporating “fusion” numbers, blending pop favorites with the classics, onto the playlist. No, came the vehement opposition. It would cheapen the group’s image. They’d be competing with DJs.


So what? Archer insisted. It could make them unique, head them toward success. Didn’t they want success? Around and around, back and forth they went [note the “thousand day” Chinese meal]. Someone posted a video online of Shreya’s impromptu performance. Joey, the group’s business manager, got a call from an angry lawyer, claiming they needed permission from The Eagles to record Hotel California [No wonder The Big Lebowski’s Dude hated The Eagles] Things get complicated [another Dudism]. Crises loom and befall the group and its members [Yikes, I’m out of room!] Will they survive, maybe even, as Faulkner told the Nobel Committee, maybe they'll even prevail?


Was I smiling when it all fell apart, or came together? I was, but with joy or cynicism? The answer… {Sorry, review has exceeded space limitations}
Posted by Mathew Paust at 3:17 PM