[Caution: This review contains a word that will cause some readers to wince, some of them inwardly while evincing an air of amused tolerance, yet others, the stoics, are apt to affect no noticeable response despite the tickle of their emotional equipoise. There are those, of course, who will mark the encounter with a laugh that resembles the bark of a happy spaniel. The advisory here is intended primarily for those whom the word and its context may invade to their very core. I make no apology for including it, as it derives from the very core of this memoir and its often astonishing milieu.]

I came close to panic just now getting this review started. Things are pretty much under control at the moment—a few deep breaths, some cognitive intervention, deadline pressure, deeep breaths... Odd, how the pressure by itself was largely responsible for the near panic as well as quelling it. The same pressure, working with the breathing and objective reasoning, helped halt the looming hysteria in its silly tracks. You see, I’d started rereading parts of Lies My Mother Never Told Me to refresh my memory from having devoured it start to finish almost a year ago. But I had forgotten one cannot without risk read just parts of this amazing memoir and expect to put it down, fiddle around with other things, and then return on a whim and continue reading. The parts I’d dipped into moments ago merely for reference grabbed me by the hair and started pulling me back in to repeat the entire ride. I knew if I let this happen I’d sure as hell miss my deadline for this week’s Friday’s Forgotten Books feature on Patti Abbott’s blog. I read fairly fast, but write rather slowly. I had to decide—and I have—that meeting the deadline has priority over the consuming pleasure of rereading the entire book. Bear with me, please, (I say to myself) as I struggle to stick to this decision. 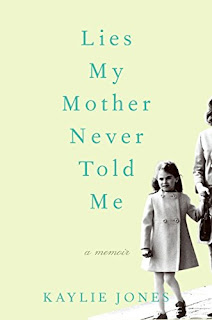 My interest in reading Lies My Mother Never Told Me was not to learn about the lying mother, the former Hollywood actress Gloria Mosolino, but about her husband, a novelist who had a deep and lasting influence on me as a young man. James Jones’s second novel, Some Came Running, lodged itself so firmly in my psyche that reading it again more than half a century later enraptured me even more than it had the first time. And I’d been to Paris in the interim. Paris! A bonus was the discovery that Jones’s daughter, Kaylie, who was born in Paris, had published this memoir, which I immediately downloaded and read and now am fighting to keep from reading again so I can get this review written in time for the Friday feature.


Writers who manage to captivate me with their art, who engage my imagination in sync with theirs, seduce my curiosity about themselves as well. Reading a book that fascinates me, I find myself constantly flipping to the back cover or flyleaf to study the author’s photo to see if I can pick up something in the eyes or facial expression that jibes with what I presume resides in someone whose work has such dominion over me. A certain poise, a confidence, maybe even a hint of otherworldliness. More substantial in feeding this curiosity is stuff written about them, especially by someone close to them, a family member, also their own informal writing—diaries, personal letters.
There’s risk, of course, that I might learn of weaknesses in my hero of the mighty pen, that he or she is or was a jerk, or worse. Knowing the possibility exists never slows me down, though. It might even speed up my desire to find out, having the macabre attraction of a disaster, a burning building or a highway crash. My psychologist son might well recommend intervention, were he aware of this situation.


I knew James Jones was relatively safe from such exposure in his daughter’s memoir. Her foreword to the new edition of Some Came Running tipped me off. And there’s this, in the first couple of pages of Lies My Mother Never Told Me:


One night when I was perhaps two, I stood up in my crib when my parents came in to say good night and announced, “I’m all alone.”
“No, no,” my father explained, “you’re not alone. You have us.”
“No. You have each other,” I told him, “but I’m all alone.”
Apparently my father sat down in a chair and burst into tears. My mother used to say that these words of mine convinced them to adopt my brother.
Why had my statement made my father cry? Perhaps this is only wishful thinking on my part, but I hope that on some unconscious level, he knew my words were true.
When I was little my mother often told me, “If I had to pick between having your father or having you, I would pick your father.” This seemed to me a perfectly reasonable and honest statement because, given the choice, I also would have picked my father.

I almost cried reading that. Knowing James Jones cried makes it easier for me to admit this. He was a tough guy. He’d boxed in several Golden Gloves tournaments as a young man. The Army decorated him during World War II, where killing a Japanese soldier face to face changed his outlook on violence. He never wore or spoke of the Bronze Star awarded him for valor in combat. Kaylie says she learned from her mother what he’d done to earn it:

A soldier from his company had taken machine gun bullets to the stomach. He lay in plain view of the Japanese pillboxes, screaming, trying to hold in his intestines with his hands. Two medics who’d tried to assist him had already been killed. My father, furious, ran from his position of safety, zigzagging like crazy until he reached the poor soldier and shot him up with the medics’ morphine.

Killing the Japanese soldier was the first time Jones knowingly killed anyone in the war. It was also the last time. He’d wrenched the attacking enemy’s bayoneted rifle from his hands and beat him to death with it. He kept the man’s wallet, which contained a black-and-white photo of a young Japanese woman holding a baby in her arms. Kaylie Jones writes, “I had seen the wallet once, perhaps ten years earlier in Paris, when in a mournful and fragile moment, he’d taken it out of its hiding place and sat at the dining room table, looking at it.


“For the rest of my father’s life, he was haunted by the killing of this Japanese soldier. After he was sent back to the States for surgery on some torn ligaments in his ankle, he told his superior officers he would not fight anymore. They threw him in the stockade. They thought he’d lost his mind.”


Years later Jones broke down after writing a scene in his novel, The Thin Red Line, when a character sacrifices himself to save his men. “My father was shaking, his face twisted up, tears flowing.” Another time his emotions took over while reading E.B. White’s Stuart Little aloud to Kaylie and her adopted brother, Jamie. Both were six. The tears came during the scene when the eponymous mouse leaves his human family to search for the sparrow that had become his dear friend.


“My brother and I were perplexed while our big, strong, grown-up father’s voice broke, and tears fell from his eyes.


“This was the first time we were faced with the possibility of loss and the reality of sad endings. Stuart does not find the sparrow, but he goes on, wandering purposefully down the road with his suitcase. To this day I cannot look at a copy of Stuart Little without thinking of my father and the lesson he tried to impart to us for our future years. Just looking at the book today in Barnes & Noble makes me so choked up I can barely speak.”

Lest you get the wrong impression, James Jones isn’t the only “character” who cries in Lies My Mother Never Told Me. It’s not really a memoir of James Jones, either, although he's what first drew me to the book. It’s essentially a sad, sad story of alcoholism and a little girl whose beautiful mother seems to despise her. The girl’s parents are both alcoholics, and, perhaps not surprisingly, the girl eventually becomes one herself. The saving grace in this horrid situation is, despite his uncontrolled drinking that would kill him, the unquestionable, undying love James Jones had for his wife and daughter. His death at 56 devastated them both.


Yet, there are moments of sidesplitting humor sprinkled along the stream of sorrow that winds with gentle honesty through this memoir. Kaylie describes one such moment she learned from her mother that happened shortly after Jones’s death.


[Reminder: this is the part containing the word, as cautioned above, that might penetrate some readers “to their very core.”]

My mother adored Lauren Bacall, known as Betty to her close friends, and they had been good friends for many years. Gloria thought Betty Bacall was the most beautiful woman she’d ever met, and she admired Betty because Betty was completely down-to-earth and suffered no flattery from sycophants.
For several days after my father died, my mother, lying with a bottle of scotch on the couch in the living room, refused to budge. Someone called Betty Bacall, who arrived like the cavalry. Taking the situation in hand, she said to Gloria, “All right, Moss. You don’t have to get up now, but you will soon. I went through it with Bogie and I know exactly how you feel. Here’s what you do: nothing. No impulsive decisions, no rash moves. Don’t start giving stuff away that you’ll regret later. Don’t sell the house. Don’t do anything stupid and for God’s sake, don’t fuck Frank Sinatra.”
Betty was of course referring to her own disastrous rebound relationship with Sinatra in the wake of Humphrey Bogart’s death. Gloria started to laugh. She laughed so hard she had to sit up to avoid choking, and from there, she finally got up and had something to eat. Two days later the phone rang. Gloria picked up. “Hi, Moss, it’s Frank.”
“Frank who?” she said.
“Frank who the hell do you think? Sinatra.” They had been friends for many years, but it seemed absurd to her that he’d automatically assume there were no other Franks of importance in her life.
After a pause, he said, “I called to say I’m so sorry about Jim. Do you need me to come out there?”
“Uh…”
To his great astonishment, she started to giggle, and couldn’t stop.

There, I made the deadline. Now I can go back and read Lies My Mother Never Told Me. Again!