I made one mistake, as Archie Goodwin might have said. To himself, of course, never to his boss—at least not without putting an ironic spin on it in the hope of being sufficiently artful to mitigate his shame with an ambiguous grunt from Nero Wolfe instead of Wolfe's otherwise definitive pfui. As I have already admitted to you straight out I made the mistake it would be folly for me to try to put any sort of spin on it so I shan't, as, again, Goodwin might have put it. 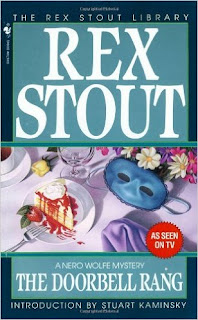 My mistake? I picked the wrong mystery to read for Rex Stout Week on Patti Abbott's Friday's Forgotten Books blog feature. Oh, the one I read was a Rex Stout mystery alright—Over My Dead Body—and it was a good one. Just the wrong one, which I discovered afterward while reading some bio information on Mr. Stout. What I learned was that of the seventy-some mysteries featuring Goodwin and Wolfe (he wrote others, as well, in his prolific career) the one I should have picked for Rex Stout Week was his most controversial. Here's what Wiki says about it:
Stout was one of many American writers closely watched by J. Edgar Hoover's FBI. Hoover considered him an enemy of the bureau and either a Communist or a tool of Communist-dominated groups. Stout's leadership of the Authors League of America during the McCarthy era was particularly irksome to the FBI. About a third of Stout's FBI file is devoted to his 1965 novel The Doorbell Rang.


Perhaps you can understand my explosive “pfui!” when I read that last sentence. Wouldn't anyone have uttered such an expletive combining surprise and total disgust had they been in my place? Having just finished reading a Rex Stout mystery other than The Doorbell Rang for a special occasion without first having read the bio? Who among you reading this now would not immediately have fetched and devoured The Doorbell Rang to learn what all the hoohah had been about? Be honest now! Anyway, that's precisely what I did, and it is why you are reading this flummery instead of some other about Over My Dead Body, which, as I've mentioned, is also good. Damned good, if you will. I have yet to read a Rex Stout mystery that isn't.
So what can I tell you about The Doorbell Rang you might not already have guessed just knowing it irked the FBI, that obviously Wolfe and Goodwin deeply irk the fictional FBI and, in particular the man all special agents were known in real life to refer to in hushed tones as The Director? Consider this exchange between Goodwin and Wolfe's gourmet chef, Fritz Brenner:

I picked up the fork. “You know what the FBI is.”
“But certainly. Mr. Hoover.”
“That’s what he thinks. On behalf of a client we’re going to push his nose in. Just a routine chore, but he’s touchy and will try to stop us. So futile.” I put a bite of cake where it belonged.
“But he—he’s a great man. Yes?”
“Sure. But I suppose you’ve seen pictures of him.”
“Yes.”
“What do you think of his nose?”
“Not good. Not exactly épaté, but broad. Not bien fait.”
“Then it should be pushed,” I forked sausage. 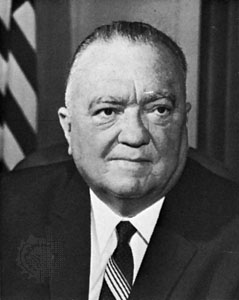 Rex Stout didn't just push noses in his novels. During World War II he wrote anti-Nazi propaganda and conducted more than 60 broadcasts on a CBS program called Our Secret Weapon. After the war he was active in a group called United World Federalists, drawing the ire of Martin Dies, chairman of the House Un-American Activities Committee. After Dies called him a Communist, Stout is said to have responded, "I hate Communists as much as you do, Martin, but there's one difference between us. I know what a Communist is and you don't."
The title. Your curiosity would not be untoward to wonder what in hell it means. I can tell you this: it, the title, comprises the very last sentence in The Doorbell Rang. Neither my nose nor imagination was pushed the least little bit to deduce, with undoubtedly startling accuracy, who did the ringing. So, I daresay, with yours.
Speaking of noses, I've gone and poked mine into The Doorbell Rang's only one-star Amazon “reader review,” which says simply, “I [sic] childish screed against the FBI. Typical liberal crap. Stout must have been senile.”
Clicking on the reviewer's name, Frank J. Habic, of Osprey, Florida, I learned this was the only review Amazon has credited to Mr. Habic for anything, ever. I left a tongue-in-cheek comment saying, “You forgot to add 'Special Agent (ret.)' to your name.” I posted the comment yesterday, and immediately began keeping an eye out for ensembles of fedoras, dark glasses, cheap suits, and shiny black shoes.

[for more Friday's Forgotten Books see the listing on Patti Abbott's unforgettable blog]
Posted by Mathew Paust at 11:04 AM