'Twas back in the days of TV and radio, for me anyway, the days when I partook routinely of the passive electronic media, that I first learned of the existence of Super Sad True Love Story by the hitherto unknown, to me, Gary Shteyngart. Maureen Corrigan was reading her review on NPR. I had come to respect Corrigan's tastes, and I enjoyed her reviews, especially hearing her read them. I liked the way her smooth alto voice filled the cabin of my truck with a friendly, relaxed feminine tone confiding a sublime joy to me, and me alone. She sold me more than a few novels over the years that way, Super Sad True Love Story being one of them. But not immediately. I'm not that easy a mark. 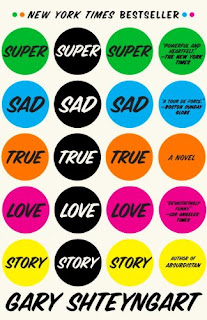 First off, the title struck me as a tad pushy a la Tom Wolfe. I could see, or hear, or imagine the publisher's marketing genii running demographic algorithms based on Wolfe's Kandy Kolored Tangerine Flaked Baddabingaboobiedingdoodle...or whatever the hell it ended up being called, daringly chic and ultimately worth every last nickel of cash bonuses for the promotional silliness, including Wolfe's foppish ice creamique costumery, because it turned out to be one helluva yippety yeeha lollapaloozish smart, fun, hip, outré, far out, etc. etc. read. **gasp**


But was I in the mood right then for cognitive cutting edge? A slight ambivalence prevailed. I was wavering. My faith in Corrigan extended to trusting she wasn't easily swept along with the predictable literati by tractioning market hype, nor was she one to predictably oppose same a la New York Times dragon critic Michiko Kakutani, noted for making Norman Mailer and Jonathan Franzen--the latter deservedly in my intuitive opinion--cry. I decided, with no disrespect intended for Maureen Corrigan mind you, to seek another opinion, another viewpoint, if you will, before committing. Kakutani would have been the obvious yin to Corrigan's yang--or vice versa--but she's too eagerly caustic. She scares me. So I decided to look elsewhere, for perhaps the El Dorado of something quietly objective.


I should allow, before I lose you completely, that Maureen Corrigan loved Super Sad True Love Story, ultimately including it on her list of ten favorite novels for 2010. She described it as "a black comedy set in America at some point in the near future: books no longer exist, Americans spend the majority of their time watching videos on their iPhone-like 'apparats' and the country is on the brink of complete collapse."


That "near future" certainly turned me into an instant bobblehead , and you know damned well it's even more urgently apt six years later. Can I get an amen. So, anyway, with nary a ponder, I clicked straight to Amazon. And, oh mercy, the Kandy Kolored cutesy cover played right into my incipient sense of this novel--rather its author--being Tom Wolfe junior. Not that this was a deal breaker--appearance or substance, were that to be. More like just, Oh, OK then, with a little shake of head at being solicited so ponderously. Don't get me wrong, I like Tom Wolfe, and I hadn't seen anything by him of late, and if Wolfe was handing off the baton to this guy Shteyngart, well then, sure, why not?


I checked some of the Amazon amateur "reviews" to get a feel for Super Sad Love Story's reception among the hoi polloi. These comments normally range from the many five-star enthusiasms to a smattering of disappointments by purchasers some of whom rage because a book took more than a couple of days to arrive via USPS, or its cover had a dent in it, or the novel had too many big words, or merely because they enjoy the high drama of spewing foul smoke anonymously about anything while out of physical reach. The three-star "reviews" are more interesting, usually because the people writing them seem actually to address the novel and appear to have put a little thought into their comments. Emphasis on the word "little."


My favorite among these is a regular who fancies himself a Kakutani protege if not a pretender to her throne of rigorous enmity. To this end he's learned to talk the talk of a literatus criticus, shaping his arguments with withering indignation over imagined stylistic, narrative and even conceptual shortcomings along with scornful comparisons to safely established authors, preferably those among the safely dead. Naturally this font of simulated erudite invective pounced on poor nouveau Gary Shteyngart with the feral lust of a dung beetle assaulting a steaming heap of yeasty pasture poopus. I shall not identify the sad creature if only because recognition appears to be his signature aim in life, and I can be cruel, too, dammit.


At about this point I awakened to the likelihood "quietly objective" was not a realistic goal, that with a book that's excited a big name agent, a mainstream publisher, and the publisher's presumably ordinarily niggardly marketing wing so passionately it eventually punches through the bricolage of quotidian distractions and into my inherent inimicality to most things new, why should I expect the professional taste arbiters not to relax their critical scrutiny a tad more than usual? Thus it came to pass that I executed a hesitant what-the-hell shrug and, epiphany in hand, crept cautiously through The Gray Lady's embrasure to see how badly her vaunted dragon critic had savaged Super Sad True Love Story.


Of course the above being a six-year retrospective, we all must by now know Michiko Kakutani inflicted grave danger on her reputation as a scather nonpareil by hurling herself onto her dreaded épée de la critique for Super Sad True Love Story. She loved the book. She rhapsodized its virtues, probably drooled on her keyboard. She included it on her ten-best list for the year. Kakutani and Corrigan! I'm almost ashamed to know this, although I wouldn't wish to try to explain why. I did buy the book. Loved it.


You will, too.
[for more Friday's Forgotten Books see the listing on Patti Abbott's unforgettable blog]