I always make it a point to buy at least one book at book signings where I'm also pushing product. My motives are mixed. I joke that it's like priming a pump. I buy one of yours and you reciprocate. I did this at my first signing, with three other authors, and ended up spending more than I made even though the reciprocal theory bore some return. But it was in December and the books I bought were gifts--signed gifts, at that--which took care of the bulk of my Christmas shopping. 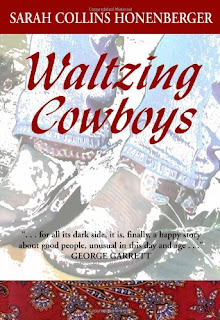 My most recent signing featured seven authors, too many to engage the reciprocal ploy without depleting my bank account even if my purchases generated any sales of mine. I bought one book, figuring it might start a rush to my table. It didn't, although I managed to sell one to a walk-in customer.
Deciding which book to buy was the rub. Cramped for space in the small store, I was positioned on the second-floor landing between two "Jessica Fletchers" who'd already each published several dozen of the kind of mysteries known as "cozies," which are distinguished from "hard boiled" mysteries at first sight by their titles and cover art suggesting a dearth of on-page violence. I wasn't in the market for a cozy. A third author, one of the four on the ground floor, was also peddling cozies.
I should note that had any of the three cozy authors bought one or both of my books I'd have reciprocated. It's the way I roll. But they didn't so I rolled on by. Two of the others had books I'd bought the previous year. This left Sarah Collins Honenberger. I almost rolled by her, too, as her books looked literary and I rarely buy literary without a proper introduction.
Yet, here we were, standing near one another in a small bookstore with her three novels arranged unpretentiously on a small table. She seemed relaxed and friendly. I politely asked her about her books and she talked about them enthusiastically but without any huckster's hype. Her sales savvy nonetheless zeroed in on the book she sensed most interested me--Waltzing Cowboys. I thought at first it might be a Brokeback Mountain-type story, but I didn't say this. She told me it was about an old cowboy who goes to New York to find the son he'd abandoned decades earlier.
Possibly without realizing it, although I suspect she sensed this somehow, too, she mentioned she saw the story as perfect for a movie starring my favorite actor.
"A friend of mine in L.A. knows Robert socially. I'm hoping she'll show it to him." She tried to restrain the excitement in her voice, but I picked up on it. It blossomed full blown when she saw she'd struck pay dirt with me.
I finished the book last night. A good read. Literary, oh yes, but a fascinating story and well-crafted, leaving me hungry for what takes place after the book ends. I'd buy the sequel in a New York minute. And, yes, Honenberger was right, Waltzing Cowboys is perfect for Robert Duvall.
So who does the waltzing? Would this be a movie Donald Trump might find excuses to avoid--or attend wearing an elaborate disguise, were that even possible? Perhaps the latter should the Orange One's, um, curiosity be aroused by the thought of the delicate dance cowboys and untamed horses do before they feel comfortable with each other. This occurs in beautifully intimate detail in the first chapter, which Honenberger had entered in a short story contest several years earlier, winning first place.
"Rhue's prairie dance with Delilah stood on its own as a story until [the cowboy's] past in New York City rose up like a ghostly mourner from Vince's funeral and begged me to explore Ford's life without a father," she writes in the book's acknowledgments. Waltzing Cowboys was the thoughtful, literary and deeply entertaining result.