Most often when I review a popular book I liked, I look to the negative amateur reviews rather than raves. This is more so I'm not influenced by the words and sentiments in the raves, such as “page turner” or “tear jerker” or “really fascinating characters,” and the like. I want the review to reflect my own reading experience, not the viewpoint of others. The pans are usually good for a laugh, and they often give me a starting point for my own assessment of the book. 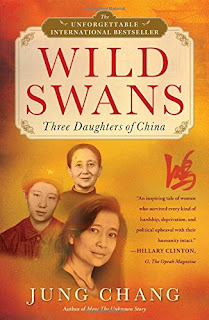 I've come to Wild Swans late, learning of it only recently from a friend who lived in China awhile teaching English. Ordinarily averse to reading books others recommend to me (probably an ego thing) this time it worked, in part I suspect because my friend in describing some of the fascinating revelations it contained tugged back the hem of a curtain I hadn't realized was blocking my view of a land and a culture far beyond anything I had imagined. Many of the handful of disappointed readers bemoaned that Wild Swans didn't excite them, didn't have enough dialogue to suit their taste for action. They compared the book to works of fiction or fictionalized biographies. They must have missed the parts describing the incomprehensible horrors the Japanese committed on the Chinese in World War II, and then by the Chinese themselves in the subsequent struggles for political control and ultimately by the prevailing Communist Party and by the regime headed by Mao Zedong, a certifiable madman who relentlessly set his subjects against each other by the millions, urging them to torture and beat each other to death and drive one another to insanity and suicide. 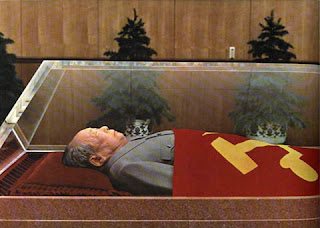 I'm surprised anyone who claims to have been bored by author Jung Chang's descriptions of such horrific atrocities as "singing fountains", in which Red Guards split victims' heads open to entertain onlookers with the subsequent screaming and geysers of blood can read at all. Or maybe they miss the dramatic foreground music that prompts them to glance up from their cellphones in time to catch violent depictions on their wide-screen TVs.
Jung Chang builds her story, an account of China's tumultuous history during the 20th century, around the lives of three generations of women--her grandmother, mother and herself, the "wild swans" of the title. Eventually allowed to leave her politically oppressive homeland for England as a visiting scholar, she began writing Wild Swans after a visit of several months from her mother. Finally free of the restrictions to talk about anything that might be perceived as showing China in a negative light, Jung Chang's mother starting telling her daughter things she'd bottled up most of her life. She talked almost nonstop, even when she couldn't be with her daughter. Jung Chang said her mother left some 60 hours of taped narrative before returning to China. I could go on for pages describing the horrors these women suffered and the incredible heroism they displayed under conditions brought about by the most wicked behavior the human species has ever displayed.
This statement is bound to arouse suspicion that I'm a political shill or at least am exaggerating beyond reason, but from reading Wild Swans I can say with complete confidence that Mao Zedong was a genius of the most evil design ever seen on the planet. If only for the sheer magnitude of Mao's murderous subjugation of China's hundreds of millions, Hitler and Stalin were pipsqueaks in comparison. As Jung Chang observed, Hitler and Stalin relied on elites and secret police to enforce their totalitarian regimes. Mao cowed and brainwashed his subjects with cunning, bringing out their worst instincts toward service without question of his every whim. One consequence was the starvation of millions during a famine brought about solely by Mao's vanity and ignorance.
My vague, naïve sense of China left me woefully unprepared for Jung Chang's deceptively dispassionate revelations. Her straightforward, uncontrived presentation, which has a diary feel at times, gives the horrors she describes a poignancy that wrenches the heart. Not that all is ghastly and bleak. Alongside the indelible image of the "singing fountains" is her childhood remembrance of having deliberately swallowed an orange seed. A family member had warned her not to swallow the seeds or orange trees would grow out of her head. She admitted having trouble getting to sleep that night worrying about it.
I prefer this memory to the other, although I know both will remain ever with me.