I put off reading What's Wrong with Dorfman? as long as I could. Not because I was afraid it wouldn't be good. I knew it would be terrific, which is why I finally gave in and read it. I read it despite knowing that whatever was wrong with Dorfman would soon be wrong with me. I was right, of course. This is precisely what happened.
Dorfman wakes up disoriented, dizzy, nauseous, depressed, and has diarrhea. As I followed his symptoms in the book it became grotesquely clear to me I had them, too—except for the depression. The saving grace is John Blumenthal's devious comic sensibility. Every time I started feeling depressed along with Dorfman, I came to something that made me laugh. If only poor Dorfman could have read What's Wrong with Dorfman? whenever he started sliding into depression maybe he would have laughed like I did, and felt better. But let's get real. 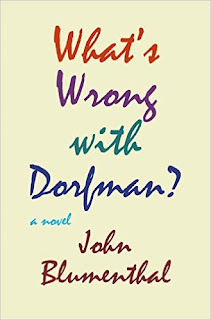 Dorfman's dad is a doctor, a medical doctor. He is such a conscientious doctor he takes the blood pressures of Dorfman, Dorfman's sister and their mother several times a day. He admonishes the three of them repeatedly, whenever they are in his presence, even as adults, before meals and, in fact, whenever it occurs to him, to wash their hands and to make sure they work up a good lather with the soap. This reminded me of my own father, who constantly harped about washing hands. The only difference was my father never mentioned the lather part. But then my father wasn't a physician. He never took our blood pressure.
It seemed fairly evident to me, as it's probably seeming evident to you, that Dorfman's father--who does other nutty things, as well, such as following everyone around in his house turning out the lights behind them—that Dorfman's father is the reason for Dorfman's symptoms. That he is neurotic, just as my father was neurotic.
Living with such nuttiness it would be expected of Dorfman to be neurotic, too. Unless the experts have re-defined neurosis, or if in fact there even is such a disorder anymore. For the sake of coherence here, let us say there is indeed such a thing as neurosis. Let us say further it's pretty damned clear Dorfman and his doctor dad are both neurotic nightmares.
I'm not going to give anything away here and confirm or deny that what is wrong with Dorfman is caused by neuroses caused by his nutty father. That would be too easy. Dorfman himself would—and did--scoff at such a suggestion. He spends tens of thousands of dollars seeing specialists and undergoing every test known to medical science. He seeks treatments not recognized by medical science, such as a Chinese “herbal treatment” that might well have been based on dried “cow turds,” and torture prescribed by a chiropractic allergist.
It should come as no huge surprise that Dorfman is a hypochondriac. This means he is ambivalent with test results that turn up nothing frightening, such as cancer or an aneurysm that could kill instantly without a wisp of warning. He's relieved as well as disappointed. His recreational reading consists of “The Big Red Book” of diseases. He commiserates and talks of suicide with a down-on-her-luck actress named Delilah, whom he meets in his doctor's waiting room and who suffers symptoms identical to his.
Dorfman, by the way, is a down-on-his-luck screenwriter. While he suffers with the uncertainty of his intermittent symptoms—that's another thing, they come and go unpredictably—his screenplay, a comic cop story, is undergoing the horrendous Hollywood sausage grinder committee process that could ruin him for good if it fails, or save his career if it ever becomes a movie.
Yikes, my own neuroses (yes, me too), which I've pretty much maneuvered into dormancy over the years, are giving me flashback pains in the abdomen by my merely recounting what's wrong with Dorfman's life. I must go now before I contract sympathetic diarrhea.
Okay, I can tell you this: What's Wrong with Dorfman? has what I would call a happy ending. If it didn't I would not be sitting here writing this report. I'd be reading an outdated magazine in the waiting room at my doctor's office. In other words no matter what is wrong with you, you will find What's Wrong with Dorfman? not only safe to read but rather a hoot—so long as you read the whole thing straight through to the end.
An added benefit for me is that I now diligently work up a good lather with the soap when washing my hands. You should, too.