Thing on the cheek. Been there forever. What the hell? What is it?
One of those things you finally pay attention to, knowing somehow it's been there all along but has never drawn your awareness enough to take into account. Now that it has, it's front and center, so much so its mystery obsesses him to the exclusion of all else. Blocks context, immediate memory including whatever outlook held sway. 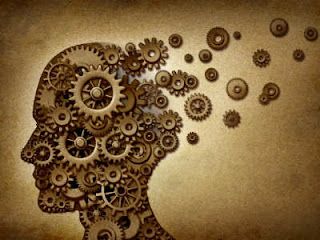 Conclusions leap to and fro. A tear. No. Would have dried long ago. And what emotion might have caused it that wouldn't outlast something so mundane as a tear? Water? From where? And only one drop? Nonsense. It's imaginary by now, whatever its cause. More than memory. Sparked into permanence by the stark effect of its appearance, its utter contrast with the context it supplanted.
What could do this? Something primal, had to be. Wriggled down through an evolutionary strata to a once vital nerve center, an ancient survival algorithm so smothered by centuries of social priorities its signals are all but ignored outside the most clamant demands. Relief, maybe, from some unacknowledged primal torment? No again. Relief is fleeting. This continues to disturb, if only by implication, with its essence: the livid power of a single drop. It could be blood.
Posted by Mathew Paust at 10:36 AM