WHAT CAME BEFORE – Gay Degani

What Came Before is the first novel I can remember that within no more than ten heartbeats after I finished it I went back to the beginning and started it again. It was that good. Also, the tangle of mysteries was so subtle I had to re-read the “teaser” prologue to nail down what who I was pretty sure was who and which whom was in fact whom. And once I started reading it again, I simply couldn't stop. I kinda hate when that happens, because my stack of to-reads is so tall it could topple and injure me at any moment. But I simply couldn't stop. What Came Before is that good. 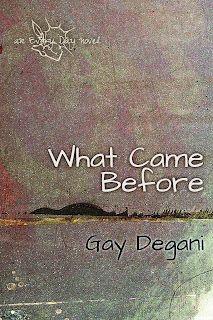 It confused me at first, I must admit. But as I kept going I eventually understood the problem: I was inside the narrator's head so completely I started wondering if I was the one going batty rather than her. Like this:
If I’d only used the coin-operated washing machine here at the apartment instead of using the Maytag at my house, the woman wouldn’t have found me.
Stop. Focus on today. Grocery store, essays, this afternoon’s ceramics class, the feel of clay between my fingers. A shower. Get back to normal. My new normal now that I’m “on leave” from my husband to – do what? Find myself? Oh, God.
I glance at the clock – 8:15 – and flop on my back, let yesterday unreel itself against my eyelids: Phoenix was barking in the side yard. Me in sloppy sweats, grabbing wet clothes from the washer, suddenly interested in escape, not dry socks, I slammed out the front door of my house where I should be living, but don’t. And then the slip of paper floated from the doorjamb onto the porch, settling, thin and persistent, at my feet.
See? Was I facing a possible gender crisis if I kept reading? It worried me a tad, I must admit, to identify with such a flaky female narrator. What saved me was forcing myself to identify indirectly with the husband, thinking maybe he had slyly persuaded her to go “on leave” from him to give him some – what? Peace? Nah, I didn't do that. I just now thought of it. What saved me, kept me reading despite my worry the narrator would scramble my mind like hers, was wondering just what in hell was on that slip of paper that “floated from the doorjamb onto the porch, settling, thin and persistent,” at her feet.


Such is the genius of Gay Degani that despite a knack for transferring to our sensibility her protagonist's incessant mental agonies over every little thing she compels us to reach beyond the struggles of inertia and impulse for whatever lies just around the next corner. Like the armed robber staring into the barrel of Dirty Harry's .44 Magnum wondering if there's one last cartridge in the cylinder, we “gots to know” what in hell is on that slip of paper.
And before long we learn how the narrator's head came to be the mess it's become, and by now we really like her and we're more than happy to climb in and help her try to straighten things out—vicariously, anyway, although I did find myself from time to time using the sort of psychic English one employs with scary movies. No! Don't open that door! DO NOT GO DOWN THERE!! That sort of thing.
Want a quick peek at backstory? OK, just a quickie now. The protagonist, Abbie Palmer, was four-years-old when her Hollywood starlet mom committed suicide, turning on the gas oven and sticking her head inside. Abbie has a vague—very vague—memory of someone carrying her to safety from their home. Now, forty-eight years later, she's a college English teacher, mother of two, and the vaguely dissatisfied wife of a successful lawyer. Thinking the well-dressed woman who knocks on her door is yet another reporter wanting to dredge up memories of her famous suicide mom, Abbie uses profanity in ordering the woman to leave. The handwritten message on the slip of paper the woman stuck between the door and the jamb before she left says My mother is your mother. Abbie is white, the woman: black.
Were What Went Before a soap-sponsored radio melodrama the organ music at this point would swell with a sort of dum da dum dum effect. And I likely would flip the dial. That I kept on and on and on, even reading it again, despite that initial less-than-subtle dum da dum dum effect in my head, should tell you either I am a tad soft in the head or What Went Before is one helluva fine read. Either or both are possible, of course, but, soft or not, my head has handled enough novels over the years to be able to tell the seeds and stems from...whatever. As Cheech or Chong, or both, would have put it back in the day, What Went Before is good...stuff.
As with most debut novels of this extraordinary achievement, writing it was not the author's debut putting words into print. Many come to the novel after developing and honing their skills writing short stories. Gay Degani is long accomplished in the art known as “flash fiction,” which is gaining wider recognition by the hour among aspiring literati. I'm so new myself to its appreciation I shall describe it as a sort of poetry without the esoteric language, rebellious punctuation or artsy arrangement of lines on the page. It is prose exquisitely trimmed and compressed to exclude all but the very essential tenderloin of a scene or story.
Bringing this skill to her novel, Degani gives us crisp, fat-free writing that keeps the mind alert, agile, appreciative and, best of all, racing along to find out what there is to find out. Even the publisher—Every Day Publishing—is in on the flash fiction thing. Here's the company's explanation:
Every Day Novels combines the bite-sized craftsmanship of flash fiction with the depth and complexity of a novel — perfect for busy readers looking for a short tidbit of fiction each day, who also appreciate the greater plot and development of novel-length fiction.
For me, though, the “short tidbit...each day” advertisement didn't apply. I simply could not stop reading, tidbits be damned.