THE DOG SEATED NEXT TO ME – Meg Pokrass 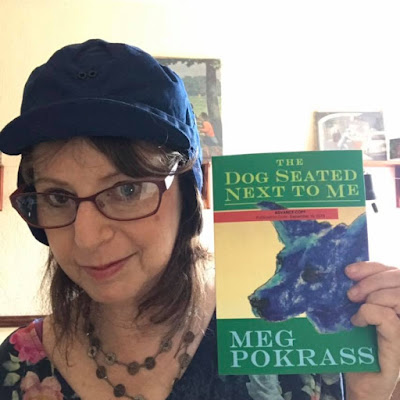 “Meg Pokrass is celebrated among her flash-fiction peers for her deft hand arousing glee in the darkness and sober reflection before laughter’s quite finished its happy sputter.”
I wrote the above in my review of her last collection of mini-stories, Alligators at Night. I meant it then—every word—and the opinion still holds. Pokrass not only remains at the top of her game, she's ramped it up a notch in her new collection, The Dog Seated Next to Me, due out in a month. She includes several blurbs with the new collection, all of which I wish I had written. But she left out another one, my favorite, which I found on her publisher's page where you can pre-order a copy (click title above). If I thought I could get away with it, I'd pretend I had written the blurb I like best. Unfortunately, the name of the blurb's author comes with it:

To enter the portals of Pokrassland is to go on a magical journey: here there are sex-charged buffalo men and melancholic women who fear six-foot spiders and fall in love with their therapists. It’s a place where people make bald statements and odd connections, where there are strange animals, purple stars and ‘a deep-ruby moon’. Unpredictable, funny and charming, the world Meg Pokrass builds in The Dog Seated Next to Me is a location readers will enter gladly and, mesmerised, they will most definitely want to stay.

-- Nuala O’Connor, author of Joyride to Jupiter and Becoming Belle.


Were a good enuf lawyer affordable to me I might have been able to "forget" to credit Nuala O'Connor on some technicality and start a small business as The Great and Well-Lawyered Blurbist, but, as we heard the crumbling President Milhous Nixon remark on his infamous Oval Office tapes about authorizing something that rhymed with alter fate, deliberately pointing his pursed presidential lips at the hidden microphone: "that would be wrong." The accompanying sound lingers of his eyelid flapping in a series of awkward winks as he said it. How quaint in retrospect, considering...wink wink.

But that was then and now we're in Pokrassland, about to embark "on a magical journey...[where] there are sex-charged buffalo men and melancholic women who fear six-foot spiders and fall in love with their therapists." Interjecting here for readers who might be intimidated by the mere mention of a six-foot spider, this is one of Pokrass’s many female characters’ frequent exaggerations. The man in this story—either a husband, ex-husband-to-be, lover, or ex-lover-to-be—tried to reassure the woman that the spider was a “dot” and nothing more. The two points of view appear in a story called—ninnies should brace themselves--Spider. Perhaps to mitigate the shock of such a title, she tells us, “It’s frigid here in Siberia. Outside, nothing can live for long. We humans and insects are all in the same boat, hoping for food, praying for love.”

And herein lie the thematic fulcra of Pokrass’s magic: food and love. I suffered hunger pangs frequently reading these little paeans to things that taste good (or should) and things that excite the libido (and not always separately). Here’s what I mean, several sentences from from The Big Sleep: “The police popped in one night to see if our fights were murderous. We’d been arguing loudly in the kitchen about the texture of a birthday cake I’d baked for the twentieth anniversary of our sweet dog’s death. It was hard as a rock, and nothing had ever been different. Arguing was part of the cake-eating experience...

“I idled into the living room wearing my ‘Munch Me’ shortie night shirt, and my long-nosed barracuda slippers. Not much else. My legs were still shapely, and tan from bronzing gel.” 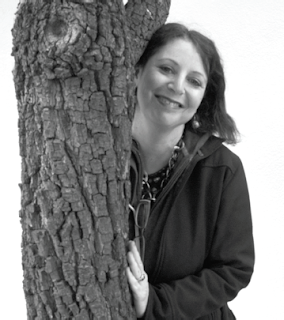 To clear up a possible misunderstanding about my use of the word “libido” above instead of the more commonplace “love,” knowing the latter frequently serves as a euphemism for the former, and understanding the two are virtually inseparable in modern romantic literature, I assure you The Dog Seated Next to Me is neither romantic nor lascivious as the terms are ordinarily applied. Nor am I trying to appear literary, something I ordinarily find supercilious. No, the point I am so laboriously edging toward is to note what seemed to me a confusion of the two concepts, and this mostly in the minds of the female characters. In fact it is solely the female characters’ sensibilities we experience in these sixty-seven fascinating vignettes—especially fascinating to me, a man. The heretofore eternal question what do women want? is addressed in each one.

The answer? Haha, I could simply say, Read the book! But that’s not enuf of a tease. In truth, as I found it—and maybe my impression reflects a denser sensitivity than I should admit—the answer to the existential question of what women want, as found in The Dog Seated Next to Me is akin to the only acceptable response to one of those infuriating one-hand-clapping Zen questions: a beatific smile that suggests understanding and acceptance of all whimsically inscrutable nuances the Cosmos chooses to reveal. In a more prosaic sense, Go gently with the flow, grasshoppah.

As one would expect, arriving at this enlightenment cost me some emotional distress and cognitive exercise. I can’t help but empathize with the male characters, hapless and dependent as they are on the women they encounter. And these women are brutally perceptive of our shortcomings. “Maybe we could start with an ant farm,” the woman in The Capacity to Love tells us the man she was with said. “I almost laughed. I had just noticed that he resembled a large ant, his head larger than human heads were supposed to be. He couldn’t find any hats that fit.” 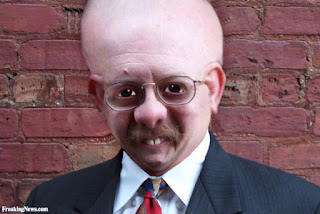 This crushingly unromantic description caused my hand to rise up and touch my own head, despite its being more in the “pinhead” class (fortunately my narrow shoulders offset the tiny head, giving my appearance a perhaps normal, proportional cast, and yet…). You see what she did? This woman in The Capacity to Love, as, in fact, all of the women in this collection of disturbing, male-ego-deflating quickies do? She made me doubt my natured, nurtured, Norman Mailer-affirmed male supremacy! And then, while I’m still patting my head uncertainly, she yanks me back from looming despair: “He stuck me with a kiss. His lips on my neck made a popping sound, like a suction cup. I let him keep me close, and we sat together like one load-bearing creature.”

Nice, huh. Yet I remind you these stories do not remain within the traditional corral of warm, furry romantic endings. These Pokrass women have a quirky, whimsical nature that seems to preclude confusing or merging the concepts of love and libido no matter what they might say to us or themselves, e.g. “‘Take it out,’ she told the man she was with in Cartoons. “He did not want to hear this, but he took it out. Now what? he asked. Cartoons, she said. Put cartoons on, please.”

So are these women completely flaky? Incapable of love as, say, a Pasternak or Byron knew it? I hope you’re not expecting me to answer this, but let’s hear one of the Pokrass women on the subject: “Love is a dumbass in an old, red car, sputtering even going the right speed.” I could do that for love. I qualify. But, then I’d hafta hold myself in a constant crouch of anticipation, for rejection, for as dumb a reason as the sputtering old, red car. You’ve seen it by now, in these few examples. We’re at the mercy of these women. We get action, oh yes. As do the women, getting it with us, altho there are exceptions, such as, “She had not made love with him for a year and she didn’t know why.” That’s in Fire Eater. I didn’t find it quite as amusing as hoped, and I did know why.

Pokrass makes up for the abstinence, tho, in Cured: “Here she was in love with a man who could not laugh, and she was going out of her mind. She felt like a spider, or a monkey, or a toad. She just so wanted to soap him up, get down to things.” I don’t recall if she does it on the page. I’m still enjoying the soaping, knowing it could end at any second, as she warns us in A Detached Kind of Imaginary Cruelty, “I administer pleasure, and then disappear, because I can, because I am a splinter, that is all I am when not making an animal happy.” I’ll be the grinning puppy--me, me!

Here’s another blurb that can shed light on The Meg Pokrass Experience: “The instantaneous back and forth between twinkle and anguish give Pokrass a dangerous edge, like a cat purring when its belly’s scratched switching in a blink to jungle mode, all teeth and claws. A lightness of style pulls us into a queenly Dorothy Parker mind where nothing ameliorates the keenest and meanest of observations. Her delivery is sly, indirect, and her cuts frequently self-inflict.” Wish I’d written it…oh, wait…

The link below is to a blogging collective that posts links every Friday to reviews of a variety of books, many of which have been out of circulation for a while. Occasionally a new one shines thru the almost forgotten. The Dog Seated Next to Me still has a month to go before you can read it. You’re getting a sneak preview! Therefore do not let the link below confuse you—or, in the time-tested vernacular, pay no attention to the little man behind the curtain.