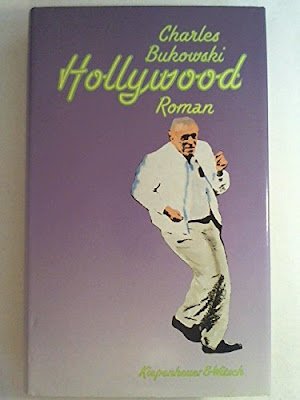 The only notion that's stayed with me from initially reading Norman Mailer's extensive report on the Apollo 11 lunar mission is a vague recollection of Mailer lamenting that something so unique to human experience as viewing Earth from afar should be communicated to us not by mission-absorbed engineers but by poets. I've forgotten if he mentioned a particular poet he thought appropriate to accompany Armstrong and Aldrin on the flight, but I sensed an uncharacteristic wistfulness in his tone that he, Mailer, calling himself "Aquarius," would have liked to be the one.
I remembered this anew while reading Hollywood, Charles Bukowski's novel based on the making of Barfly, a darkly comic movie depicting two days in his life as a drunken young poet. Many of the novel's characters are easily recognizable behind their fig-leaf pseudonyms. One of them is Victor Norman, "perhaps the best known novelist in America. He appeared on tv constantly. He was glib and deft with the word. What I liked best about him was that he had no fear of the Feminists. He was one of the last defenders of maleness and balls in the U.S. That took guts. I wasn’t always pleased with his literary output but I wasn’t always pleased with mine either."
When they meet, Bukowski's alter ego, pseudonymed Charles Chinaski, tells us “I liked his eyes. He looked calm and knowing...I shook hands with him, said, ‘The barfly meets the champ.’ He liked that.” Later they’re driving to a party in Chinaski’s black BMW. “‘I’ve got a black BMW too,’ said Victor Norman. ‘Tough guys drive black BMW’s,’ I said.” Some literary conversation between these two macho writers at the party: 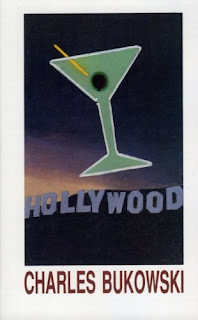 Victor looked at me. “You doing anything now?”
“Fucking with the poem.”
Victor looked a touch sad. “They gave me a million dollars to write my next novel. That was a year ago. I haven’t written a page and the money’s gone.”
“Jesus.”
“Jesus won’t help.”
“I’ve heard about your alimony, all those x-wives…”
“Yeah.”
It was when Chinaski mentions noticing Victor Norman staring at him curiously that my vague memory from “Of A Fire on the Moon” came to mind. Here was the wistful macho man who could write about the giant leap for mankind only via his imagination, seated across from the macho poet who wrote the screenplay for a movie about a piece of his own life.
Sure, to us the notion is ludicrous, and it might well not have been anywhere near the minds of either Bukowski or Mailer, but if it had… No they did not fight. After a trip to the men’s room, Chinaski tells us, his wife “leaned over and whispered, ‘Victor Norman came over while you were gone. He says that it’s very nice of you that you haven’t said anything about his writing.’ […] I looked over at Victor Norman, got his attention. I gave a little nod, winked.”
Whew, major literary macho puncho averted. How much of it is true is hard to say for sure. I know some of it is, which is why I lifted the pseudonym fig leaves above to introduce the scene. Because the publisher has pronounced Hollywood a work of fiction its author has some leeway with the narrative and characterizations. Some exaggeration is to be expected. Most of the characters would have been unknown to me even if Bukowski had used their real names. One I recognized instantly without any name: “I saw the famous actor with the perpetual tan. I’d heard that he went to almost every Hollywood party, everywhere.”

The pseudonym for this one wasn’t really needed: “It was Jim Serry, the old drug guru of the 60’ s. He too went to many of the parties. He looked tired, sad, drained. I felt sorry for him. He went from table to table. Then he was at ours. Sarah [Bukowski’s wife, Linda Lee Beighle] gave a delighted laugh. She was a child of the 60’ s. I shook hands with him. ‘Hi, baby,’ I said.”
Bukowski captures the craziness and unpredictability of the film industry with a feel of authenticity, yet there are times it seems he pushes the envelope a tad too far, even for Hollywood. One of them is a stunt Chinaski’s director pulls with a wheeler-dealer producer who has cut off financing for the project. The director, whom Bukowski calls Jon Pinchot, threatens to cut off one of his own fingers if the producer won’t honor his company’s contract. Pinchot buys an electric saw, takes it to the producer’s office, plugs it in, turns it on, and places his pinky on the desk.. The producer caves. I laughed, but thought, Oh hell, Bukowski wrote this scene after too many bottles of wine. But I checked it out. 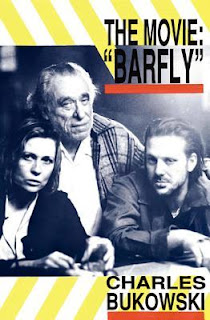 I knew where to check because in one scene Chinaski and his wife meet “Rick Talbot” at a restaurant. We quickly catch on that Talbot is Roger Ebert. They hit it off. Talbot is fascinated by the project. Soooo, I Googled Ebert’s review of Barfly.
He liked it. Called it one of the year’s best films. Here’s what he said about the finger incident: “Barfly was directed by Barbet Schroeder who commissioned the original screenplay by Bukowski and then spent eight years trying to get it made. (At one point, he threatened to cut off his fingers if Cannon Group president Menahem Golan did not finance it; the outcome of the story can be deduced by the fact that this is a Cannon release.)”
I haven’t seen Barfly, which stars Mickey Rourke and Faye Dunaway, with a cameo of Bukowski seated at a bar with them, but I gladly give the book, Hollywood, two thumbs up.
[Find more Friday's Forgotten Books links at Todd Mason's amazingly eclectic blog]