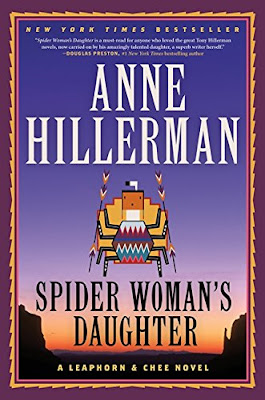 It took the movies to awaken me to my addiction to the late Tony Hillerman's Navajo Tribal Police mystery series. I realize now the junkie that I've been since the '80s when a friend suggested Hillerman's books were well-written and—and here was the clincher—they were mellow.
So I tried one, then another, and another...until I'd read all eighteen plus The Fly on the Wall, a mystery about an investigative reporter, and then I bought Hillerman Country, a coffee table book the novelist produced with his brother, a photographer, and when I'd read all of his fiction and my addiction for Hillerman mellow had become pronounced I read his autobiography, Seldom Disappointed. Nor was I disappointed by anything of his I read. I even enjoyed the TV movies Robert Redford produced of four of the Tribal Police novels, even tho the first one, starring Lou Diamond Phillips and Fred Ward disappointed Redford so much he ditched the two actors and hired Wes Studi and Adam Beach as the two fictional Navajo cops—Lt. Joe Leaphorn and Officer Jim Chee.
And then, when Hillerman died in 2008 and his daughter, Anne, picked up the baton and continued the Leaphorn/Chee series, I read the first one, The Spider Woman's Daughter, thinking like a junkie that even tho she was a Hillerman, I'd find her writing more akin to a heroin addict's substituting methadone to kick his habit. And that is sort the way I remember my first reading of Spider Woman. In fact, my recollection of having read it was nonexistent when, unknowingly, I decided last week to read it again. I caught on that this was a second reading about a third of the way into the book. It is long, about twice as long as her father's novels, which are the ideal length for my attention span. Spider Woman left so weak an impression on me that I turned away from the Hillerman milieu and read none of the next four in the series Anne has published.


As I have trouble handling suspense in life, and can tolerate it in fiction understanding it's only a vicarious immunization, I won't try to torment any of you who might have a similar aversion to prolonged uncertainty, and say right now that while I still feel Spider Woman could be trimmed by half without hurting the narrative one whit, leaving out much of the domestic subplot lines that for me only bog down the main story, I feel much better about Anne Hillerman's writing and devotion to her father's legacy and to the Navajo and Hopi people whose lives are depicted in these novels, and I intend to read the other four. I've downloaded the most recent The Tale Teller, to see if the professional critics are right in judging Anne’s writing to have become “stronger with every new installment in the series,” from a review in Library Journal. Regardless, I’m reading them all because my Hillerman jones is back with a vengeance.
And as I said up top, the pusher was Robert Redford’s movies. I’ve recently taken to relaxing after a day of writing and loafing (with creative flummery going on in my head, of course). As I no longer possess a TV, I’ve been digging thru my collection of DVDs and rewatching some of the old favorites. Eventually wanting something new, I bought the three Studi-Beach videos and watched the first, Dark Wind (which is not on DVD) as an Amazon Prime online feature. I then went back and started rereading the novels. After the first and fourth (for reasons explained in my reviews—here--I decided to leap ahead to Anne’s. And so here we are.
Once I recognized I’d read Spider Woman before, I soon remembered it was, in a sense, a sequel to one of the four Leaphorn/Chee movies, which I’d just rewatched: A Thief of Time. A couple of the minor characters in Thief have advanced to limelight time in Anne’s sequel. And a new member of the ensemble cast, Officer Bernadette Manuelito, whom Tony Hillerman introduced in the latter half of his series, now has a starring role. As I recall from my first go-round with the original series, “Bernie” started as a dispatcher and eventually became a regular Tribal Police officer and the presumptive future wife of Jim Chee. If they were married under Tony’s watch, I’ve forgotten, but they sure as hell are man and wife in Spider Woman! Their married life undergoes the typical strains of any pair of young newlyweds as well as the additional pressures and conflicts of both serving as cops in the same department.
As plots go, Spider Woman’s is fairly simple—no then-there-were-none-Golden-Age-of-Mystery-Agatha-Christie-puzzle-mystery here, nosirree, Bob. Didn’t take me long to know beyond any doubt whodunnit and whydunnit, and nor would it you, and the only mystery to me is why it took so long for Bernie and Chee to figure it out, as well. But that’s not what I look for in the Leaphorn/Chee/and now Bernie novels. They’re really more police procedurals in the brutal, breathtakingly beautiful Southwestern U.S. landscape no doubt known now to millions of readers worldwide as Hillerman Country.
I should note that the “procedural” plot is not without some serious suspense involving physical danger to the main characters and some downright spooky situations forcing me to fight down the urge to shout NO, FOR GOD SAKES NO! on several occasions to keep from having the neighbors call 911. You see, the plot involves an investigation by Navajo, state and federal officials to solve the shooting of a civilian of no great political or monied significance. I’d like to keep face down the card with the identity of the shooting victim emblazoned upon it, but I can’t, because the secret will be revealed in the very next several paragraphs I’m including here as an example of Anne Hillerman’s narrative prowess. And so, as masters of ceremony typically say when it’s time to reluctantly pass the microphone to someone else, take it away, Anne!
Leaphorn strolled into the lobby, nodding to Bernie, cell phone at her ear. “Say hi to Chee for me,” he said. She watched him head toward the parking lot, noticing that he was limping a bit. She knew he had a touch of arthritis in his knee. She should have asked him about that. And about Louisa.
“Hello, beautiful,” Chee said. “Done with the meeting?”
“Not quite. The lieutenant had some good stories. Now the humdrum stuff looms on the horizon. Your timing was perfect.”
“Through the lobby window, she saw someone climb out of the blue sedan backed in next to Leaphorn’s white truck. She watched Leaphorn walk toward the truck, extract the keys from his pants pocket.
“You still grumpy?” Chee asked. “I got off to a bad start this morning.”
The person extended an arm toward the lieutenant. Bernie saw a gun. Heard the unmistakable crack of the shot. Saw Leaphorn stagger back, falling against his pickup. Crumple to the asphalt.”