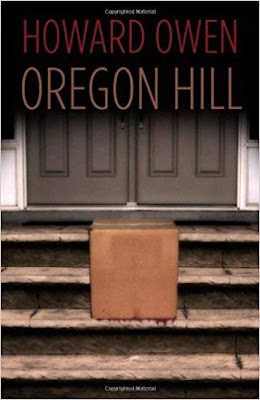 Just because it doesn't take long to figure out whodunnit and whydunnit doesn't mean we can't call Oregon Hill a mystery. And just because we're pretty sure we know who murdered Isabel Ducharme, cut off her head and mailed it to her father doesn't mean we have a leg up on our narrator, investigative newspaper reporter Willie Black. He knows as much as we do because he's the one telling us what we know, which is what he knows. But being a newspaper reporter he has to nail down his suspicions and hunches before he can to put them into the paper without getting the paper--and himself--sued, thus costing him his job. Willie has more at stake than we do in keeping suspicions tentative as a check on leaping to premature conclusions. We as readers have only private pride on the line with our guesses. Engraved on the hard drive of a professional skeptic like Willie is the rule of thumb, If your mother says she loves you, check it out.


And Willie Black is already on the bubble. He's a drunk who's been demoted back to the night police beat from covering the Virginia Legislature because he refused an editor's request to sneak into a dying man's hospital room to get a story. We also know he's carrying guilt for writing stories that helped send a man to Virginia's gas chamber, who was later proven innocent. On top of all this, Willie's newspaper's been taken over by a chain that's squeezing the life out of it, dumping employees overboard left and right (I almost wrote willy nilly, but...well, you know), and pressuring its editors to stem a bleeding circulation that drags precious ad revenue down with it.


In this dynamic of booze-sodden guilt versus very sober job peril Willie stubbornly follows up on little indications police have arrested the wrong man for murdering Isabel Ducharme. Willie is virtually alone in this quest, angering his bosses, who don’t trust his motives, the police, who are satisfied they’ve solved the case, and the victim's mother, who believes he’s taking the side of the man who killed her daughter, spits in his face when he goes to the Ducharme home in search of information. Willie has a dicey history with the police lieutenant who heads the investigation. They grew up in the same tough neighborhood but had never been friendly. This subtle enmity remains, in addition to their natural professional adversity, and Willie admits to us he still finds the lieutenant intimidating.


These circumstances, the characters and dialogue, and the milieu in which Willie Black persists in his search for the truth—both in the “word factory,” as he calls the newspaper, and on the street, are rendered with the realistic feel of someone who knows the terrain from intimate experience. Howard Owen’s forty-four years in daily journalism included a stint editing sports for The Richmond Times-Dispatch. The city and the newspaper, which is unnamed, provide the setting for the novel. I liked Oregon Hill so much that I’ve downloaded Evergreen, the last in the eight-book Willie Black series. I may even go the whole stretch and read them all.


I learned a long time ago that a writer should concentrate more on showing the reader than in merely telling what things look like and what takes place. In book reviews I’ve taken to providing an example of the writing and voice, which are even more important to me than simply plot. In that light, here’s a taste from one of my favorite scenes in Oregon Hill:


I was waiting for the new one to brew when one of our Sarahs came in. This one actually is named Sarah. Sarah Good-night. U.Va., Class of ’08. We generally have two kinds of people in our newsroom. We have the old farts like me, mostly male, trying to hang on to our sorry-ass jobs in a dying industry in a tanking economy. And you have the Sarahs. They’re mostly women. They’re young, they’re talented, they’re motivated, and they’re very politely, very respectfully waiting for us to get the fuck out of the way so they can get our jobs, which they’ll do just as well for about half the salary. If we don’t get out of the way, they go to law school, which many of them do anyhow.


I think I’m kind of a mascot for the kid reporters. They might not want to be me, but they want to think that they work in a business that has so-called characters (if not character) in it. think I’m some kind of romanticized embodiment of a reporter who probably never really existed, except in the minds of old-fart editors who embellished and polished stories until the hopeless alcoholic with no talent and less scruples—the guy they wished in hell many times as deadlines were blown, participles were dangled and newsrooms were trashed—morphed into a Bogart-Gable hybrid.


Speaking from personal experience, that, my friends, is pretty damned close to how it was.