Almost immediately the two well-seasoned cops staring at the young man 's bludgeoned corpse on a little-traveled road some forty miles from Paris know they're likely in something over their heads. Else why were they rousted out of bed in the wee hours to investigate "a nothing body. A kid, for Christ’s sake! Murders like this, who cared??"


"Mein Gott," grumbles one of the cops when they recognize their predicament. "Ah, Mon Dieu," the other whispers. 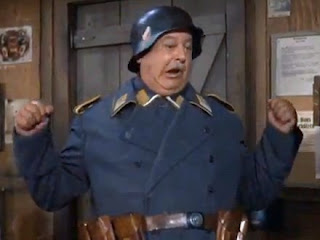 Schultz from Hogan's Heroes, and Casablanca's Louis? Start of a beautiful friendship? Well, it's a partnership, and beautiful in the sense that they're damned good detectives working together in Nazi-occupied France to solve serious civilian crimes while World War II rages around them. Hence their switch into caution mode finding what seems to be perhaps the end of a not-so-beautiful friendship, in particular a romance broken not with harsh words to the heart but, less rhetorically, with a boulder to the head. The next obvious possibility is that the French Resistance murdered the victim for collaborating with the enemy. But they find no evidence of this.


"...why the goddamned interest?" Hermann Kohler muses. "Why set the Gestapo and the Sûreté on to something that wasn’t even in their turf and could just as well have been left to the local flics and the Préfet of Paris whose beat it was? Ah yes.


"Why, unless those local flics weren’t any good and von Richthausen, being a von like the rest, had got his back up?" He and his French partner soon learn the Nazi interest goes all the way to Berlin, that the Führer himself has his eye on them. But why? No one will say.


More interesting to me than the who and the why that occupy these two cops is the who of the cops and how they've come to be working together. First of all Hermann Kohler is no Schultz, despite a stereotypical physical resemblance: " A giant of a man with the heart and mind of a small-time hustler... At fifty-five years of age he understood only too well the vagaries of life. He’d cock an eye at something new but beyond that, no surprise, only a stolid acceptance of human frailties. He frowned at his superiors, remaining remote from them. The bulldog jowls, sad, puffy eyelids that bagged and drooped to well-rasped cheeks and shrapnel scars, served only to emphasize the hidden thoughts behind the faded blue and often expressionless eyes. The nose was pugnacious, the lower jaw that of a storm-trooper. Hermann had come up through the ranks." 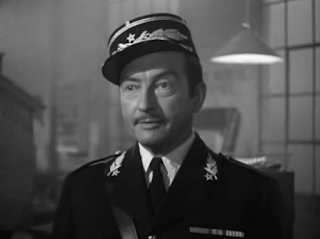 Jean-Louis St-Cyr, the team's French half, "was inclined to be plump, to let the dust settle on things, but to be very careful when blowing it off. Somewhat shabby, somewhat diffident, he had the broad, bland brow, the brown ox-eyes of the French, a moustache that was thicker and wider than the Führer’s and grown long before the war and thus left in defiance of it. The distant air of a muse, the heart of a poet and the hands of a … what? stormed Kohler. A fisherman, a gardener, a reader of books in winter. A chief inspector of the Sûreté Nationale, the Criminal Investigation Branch at number 11 rue de Saussaies."


One problem I had, and others have mentioned, is with author J. Robert Janes's narrative style. In two words, it's not smooth. The point of view continually jerks back and forth between Hermann and Louis often with no cues as to whose mind we are reading. Mayhem, appearing in 1992, is the inaugural novel of what has grown to a series of sixteen cases involving the odd detective partnership. The most recent, Clandestine, came out in 2015. I may read more of them, as I grew to like the two characters—fully developed as individuals and as reluctant partners getting to know and respect each other. There's even a cautious affection between them, which both know is temporary and may end in disaster depending on the course of the war. Here's St-Cyr's take on that likely outcome:


So far they had avoided the inevitable. Each day, however, had brought them closer and closer to that final moment of decision. To kill or not to kill Hermann. He’d hate to have to fire the shots. The Resistance would hunt him down in any case. They’d never listen. Not to him. I live on the edge of a chasm, he said to himself.


Other characters, though less intimately drawn, are memorable in supporting roles. There's Gabrielle Arcuri—oh, be still my squirming libido—who is, St-Cyr tells us, "at once every man’s dream of a lover and the heart’s dream of home." Sure, the guy's a poet, 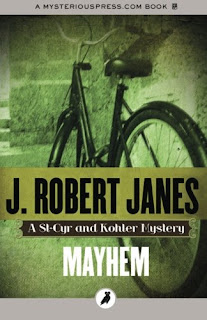 but I wholeheartedly agree with his take on this mesmerizing, possible femme fatale. Then there's the bemedaled Nazi SS general, dangerous as an enraged scorpion. His taking center stage as the novel's apparent villain-in-chief summoned forth memories of Hans Hellmut Kirst’s WWII novel Night of the Generals, with its film version starring that Lawrence of Arabia sterling duo Peter O’Toole and Omar Sharif.


As Mayhem is twice as long as the average crime novel, I had to buckle down and take time off from my chaotic social life to finish the damned thing in time to write this review for my Friday’s Forgotten Books deadline. The read, with its speed bumps and hairpin turns, took twice as long as I’d hoped, and my fingers at this very moment are trembling with haste—similar, I suspect, to the anxiety that drove Hermann and Louis to solve their mysterious assignment in time to keep from being...oh, I’ll keep that card face down. Just for the hell of it. Mein Gott, you say? Ach, Mon Dieu to you!


For those of you who on the off-chance hated this review or simply want some substance, more informative ones by friend Tracy can be found by clicking on the link to her blog Bitter Tea & Mystery. Good day or night, then, to you and all the ships at sea.