Twofer: DEAD IN THE WATER/MURDER ON ICE – Ted Wood

When Robert B. Parker's Jesse Stone's booze problem cost him his wife and his job as a detective with the LAPD he went east, taking the job of police chief in a Massachusetts seaside town called Paradise. Canadian author Ted Wood's Reid Bennett went north and took a one-man cop job in the lakeside Ontario village of Murphy's Harbour after he lost his wife and police-detective job in Toronto. Bennett's screw-up was killing two bikers of three he caught in a would-be gang rape. He wasn't drunk, and he was unarmed. He killed them defending himself with his bare hands, something he'd learned to do as a U.S. Marine fighting in Vietnam. 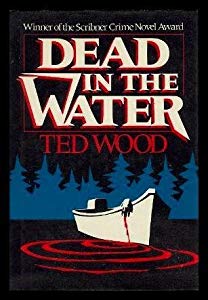 "I was off duty. My gun was locked in the safe at the station and I'd changed into plain clothes, so they didn't even know I was a policeman. It wouldn't have mattered to the big one, anyway. He went six-four, maybe two-eighty. He figured he was Superman. Until I stuck two fingers into his throat."
While Bennett's fearless action possibly saved the girl's life, it certainly prevented two of the trio of human scum from raping her. Yet he was charged and tried for murder. "It's for your own good," his supervisor told him. "You'll be out on bail in an hour and you'll be acquitted. You have to understand, nobody likes a policeman who can kill people." Despite being found innocent in his trial, the media lambasted him "and the phone calls started. Then the garbage against the door of the house.
"I couldn't understand at first what made the public take sides with a bunch of bikies working on a gang rape. But I worked it out as the days passed. It was me they resented. I'd broken faith with the liberals who were slamming me now. When I'd volunteered for service in the States, gone to a war their own guys were running to Canada to avoid, I'd put myself on the other side of some fence. If I'd stayed in northern Ontario and rotted my lungs out in the smelter at the nickel mine, they would have treated me like a brother."
Dead in the Water is the first in a series of nine Reid Bennett novels. Though it received so-so reviews, it won the Scribner Crime Novel Award for 1983. I understand the tepid critical reception, yet went on and read the second in the series, Murder on Ice. Two blogging friends, Richard Robinson of Tip of the Wink, and Kevin Tipple of Kevin's Corner, had encouraged me to try the series, and I'm glad I did. To borrow the punchline of an awful old joke my dad loved to tell about the guy who couldn't help cheating on his gorgeous wife: "If you have steak every night at home, now and again you just feel like going out and getting a good ol' hamburger." There's no mistaking these first two Reid Bennett novels as anything but literary hamburgers, albeit rather tasty ones. 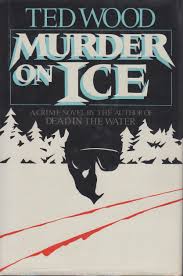 Death in the Water's Kirkus review, which I understand comes with a fee, found Wood's talent distinctly "modest...for wry, hard-boiled delivery--despite a plot that's hectic rather than genuinely mysterious or clever...solid action, a few charming touches, sturdy shoestring-procedure: a serviceable debut, with promise, perhaps, of better things to come." I can't disagree, and the same applies for Murder on Ice.
What I liked best about both novels was the voice. The first-person narrative by Bennett is matter-of-fact without the macho sneer I hear in most characters of this type. He's respectful of women, and while painting photographer Carl Simmonds, "the town's only obvious homosexual," with stereotypical clothes and flamboyance, calls him "a good man."
I liked Sam, Bennett's amazingly well-trained German Shepherd, essentially his only crime-fighting partner. Reviewers have suggested Sam's a tad too good to be true—and he is—but so is Bennett. These books are intended as entertainment, after all, not highbrow literature.
I agree with reviewers who find the stories' mystery aspect somewhat less than brilliant. Well, you who've been reading my reviews know clever, complex mysteries can annoy me as cutesy. I'm more keen on character, suspense, and the procedural apects of crime-solving—just enough of a sense of authenticity to allow suspension of disbelief. These two novels pretty much lived up to those expectations. Wood might have toned down the crowd-hysteria scenes without hurting the stories. Several scenes like this reminded me of those old silent movies where a couple of guys in a bar start fighting, and instantly everyone in the place is involved, smashing each other with chairs and throwing people through windows. I enjoy scenes like that in movies, but as comedy. In Wood's novels they detracted from a sense of reality I was otherwise buying into. 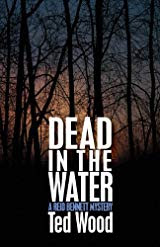 I'm sure some of you are wondering what these two books are about. Their plots. Every review I've read does that, and I hate to reinvent perfectly good wheels. You can link to Kevin's and Richard's reviews if plot particulars are what you want. You can guess from the titles that the first one took place in summer, while the second one in winter. Without risking spoilers, this tells you right away that chase scenes in Dead in the Water take place with boats, and in Murder on Ice the vehicles are snowmobiles. And there are chase scenes—breathtaking ones. There are fights, handled by an author who knows whereof he writes. One of his many jobs, listed in the author bio, was beat cop. He also was an airplane pilot, a pinboy, soda-jerk, freight porter, and "advertising hot-shot." Before Dead in the Water, his debut novel, he'd written "dozens of short stories, hundreds of magazine articles including two long-running humour columns, television plays and one musical comedy."
I could add, tongue in cheek: and maker of pretty damned good hamburgers.