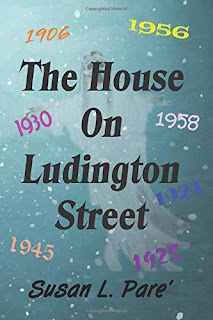 I've read only two novels about my hometown, both by Susan Paré. The only other one I know of, rumored to be a satire about one of my high school English classes by the teacher, was never published (I hope). I ran into the teacher several years later and he snickered when I mentioned the rumor, but didn't deny it. I've not seen the manuscript.
Decades later, merely learning of Paré's The Mayor's Son caused one of my eyebrows to arch—something I cannot will it to do altho I've tried many times. Paré was four years ahead of me in school and I didn't know her, but a cousin dated her younger sister and her younger brother dated my sister. Prime sources for a devious novelist. So, having actually been the mayor's son back then I had no choice but to read the book. Forced myself to read the book, and...and...whew! Deeep deep breath. My fears for naught. Paré’s mayor's son and mayor resembled neither me nor kin! No embarrassment. Great fun actually. Gave me an excuse to dig out the old high school yearbooks to see if any of Paré's classmates or other townies had appeared thinly disguised in her book. None I could say for certain, but I recognized many names.
It is possible some of the characters’ personalities matched their namesakes. But I’d read Lawrence Block’s autobiographical Telling Lies for Fun & Profit, and knew all about the fig leaf of legal boilerplate and artistic license and that changing names “to protect the innocent” really means to protect the author and publisher from lawyers. Same with using names fictitiously. I’ve a hunch, tho, most of Paré's acquaintances who might recognize themselves in her novels, either by name or reputation, are tickled pink. Maybe not the fictitious mayor and mayor’s son. Maybe they really were cut from whole cloth, or were so nasty in life even the hungriest lawyer would laugh with disgust at their depictions, and send them away.

Two weeks ago came The House on Ludington Street. My misgivings this time eased by relief from The Mayor’s Son, I wasn’t nearly so cautious approaching the new book, altho I grew up in a big old house that cornered on Ludington. Curiosity pulled me in. I read Ludington last week, and the whew this time when I reached the end was the kind that caps one helluva fun ride.
Once again out came the high school yearbooks with their dusty, faded nostalgia tickling poignant memories from the long-ago faces and names, silly inscriptions. Hundreds of fragments vying for the focus that could summon forgotten stories back to life. Too late now, tho, with Poop’s grandfather seizing control with a narrative richer and more compelling than any I might find locked in the vault of my subconscious archive. It’s a story about corruption, prostitution, grisly murders, a secret tunnel, and a ghost. It’s about my hometown, but not a town I ever knew. I know it’s my town only because I know the names and the places. Especially the house on Ludington Street, which I’d seen often, but only from the outside.
I even knew Poop, but as John, and the only Whitey I remember was in Susan Paré's class. During my brief acquaintance with Poop I’d thought he was closer to my age. He moved away shortly after his father died in a highway accident. Unless memory’s playing a trick here, I recall John telling me a strange story around the last time I saw him. He was a mischievous fellow, and I thought at the time he was pulling my leg. Now, half a century later, I’m pretty sure John’s tale was something about a secret tunnel.
In The House on Ludington Street, John tells his buddy Whitey about a secret tunnel. Whitey reacted about the same as I did, except he laughs, while I just nodded and filed it away in my head under “tall tales.” In the novel, John has gotten the idea from his grandfather, and when he and Whitey ask him about it the old man gives them much more than they’d hoped for. The story cleverly unfolds in chapters coinciding with Grandpa needing breaks for meals and rest. At one point the boys actually persuade Police Chief Austin to let them hunt in the city hall basement for an entrance to the rumored tunnel. If you think I’m going to give you for free what happens next, you should know my dad had the real Chief Austin lock me in one of the City Hall jail cells once just to let me feel what it was like. The door slammed shut, and they left the room. I was alone in there about fifteen minutes. It seemed like hours, and I learned the meaning of claustrophobia.
Late at night sometimes my dreams take me back there, and I feel the presence of ghosts in that cell. I don’t want to get them mad at me for giving away their secrets! 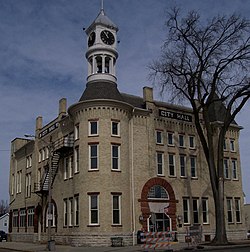