THE CASE OF THE SEVEN WHISTLERS – George Bellairs

When it comes to making me laugh, the power of visual triumphs extravagantly over cognitive--graphically or with words. It's a phenomenon similar to the effect of experiencing a joke versus having it explained.


Take, for example one of the owners of George Bellairs's fictional antique shop, a man referred to only as "Mr. Small" but described in grotesquely comic detail as "an enormous man with a huge paunch which hung between his knees when he was sitting. He had solid limbs like the branches of an old tree and a round florid face. His head was shaped like an orange and topped by a brown, ill-fitting wig. His thick, sloppy lips, large Roman nose, small shifty eyes and ill-fitting clothes finished-off an appearance more like that of a shady broker’s man than an expert in old furniture and prints...so flabbily fat that he looked to be trundling his paunch before him like a railway-porter wheeling baggage about...He was smoking a black cheroot which he kept removing from his mouth and then replacing with a repulsive movement of his lips, like a hungry child taking the teat of a feeding-bottle."
Had Mad Magazine cartoonist Don Martin been working back in the 1940s, and had he and Bellairs perchance collaborated on an illustrated volume of The Case of the Seven Whistlers, Mr. Small, with modified eyes, might have been represented by one of Martin's favorite characters, Fester Bestertester.


Bellairs describes Mr. Small’s niece, Mrs. Doakes, who worked in the shop with her uncle and his brother-in-law, tiny Mr. Grossman, as “a tall, muscular, good-looking woman” with “a way of exciting men whilst putting women out of countenance. Martin might have depicted her thusly, with some essential tweaks: 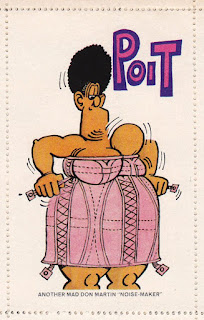 The entire crew of this novel are portrayed so comically I nearly forgot I was reading a murder mystery, with two violent deaths—one so ghastly I had to wonder if Edgar Allen Poe had gotten a hand in it somehow. Tiny Mr. Grossman is the first victim, found curled up, suffocated, in an antique wooden chest he’d bought from a woman who eventually becomes the second victim, found with her head crushed by either an assailant or rocks at the foot of a cliff from which she’d either jumped or been hurled by a murderer. Tough, I should think, for Don Martin to win laughs with a drawing of that. Perhaps Gahan Wilson could have been brought in for the victim illustrations were time travel an option. 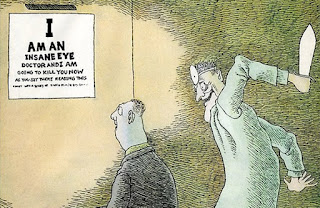 It’s a well-crafted mystery with enough plausible suspects to challenge even the most astute puzzle-solvers, albeit a distinct gullibility in such exercises can challenge my opinion. Anyway, this one fooled me right up to the reveal’s edge. I’m not too proud to blame the thrall holding me captive by Bellairs’s characters. Like a magician’s distracting hands, their general comic weirdness consistently diverted my attention from the story’s Sherlockian signposts. Oh, where to begin?
Miss Selina Adlestrop, a spinster whose “small button nose, like a whiteheart cherry, little heart-shaped lips and a timid, faltering manner...stood her in very good stead and hid her shrewdness in striking a bargain,” which she employed whilst haggling over the chest-cum-coffin with the tiny Mr. Grossman, whose small hands and feet and slim figure and “grace of movement of a ballet dancer” attempted to charm from her more quid than she’d have preferred to put out for the item so dear to her romantic heart.
Then there’s the local constable, Donald Puddiphatt, a duffer “perspiring from every pore and puffing like a traction engine as he argued with Seth Hale,” the local undertaker. “They were an ill-assorted couple. One looked to have been poured into his uniform which fitted him skin-tight owing to his ever increasing size; the other was nearly as fleshless as a skeleton with old clothes hanging from his bony body like washing on a clothes horse. 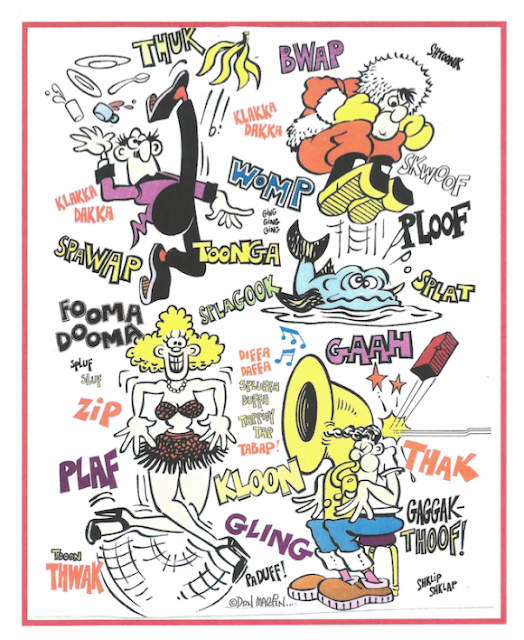 A great brouhaha breaks out when the chest is opened in Miss Adlestrop’s rooming house, and Grossman’s little body is discovered curled up inside. Women faint. One becomes hysterical and has her face slapped by another, and Seth Hale, the skinny undertaker, “fell unconscious to the ground with a great rattle of bones.”
Oh, and there was the local politician, Councillor Blanket, who “ looked made-up for the part of John Bull, like an actor just ready for the footlights. Grease-painty complexion, tufts of hair, bald head with puffs of white at the side,” and Miss Adlestrop’s uncle, Mr. Alfred, a “rabbity” little eccentric inventor “with a squint and a ragged moustache,” who, "ran so fast from the pandemonium you couldn’t see his legs going, like a mouse," with Councillor Blanket in tow, “lumping along steadily, his head held firmly erect to keep his hat from falling off.”
Superintendent Gillespie, in charge of the investigation for the local constabulary, “would go for days without speaking to anyone and then suddenly change into bouts of great jocularity.He always wore his hat in the office when his liver was wrong side out. He said there was a draught from the windows, even when they were closed.” It quickly became clear the case was too much for Gillespie’s force, so his boss, Chief Constable Colonel Carslake, “tall, thin, peppery and self-important,” was forced to call in help from Scotland Yard, hence the arrive of Detective-Inspector Littlejohn, of the Metropolitan C.I.D. A one-man cavalry, who, for some odd reason is not described in any way, presumably because he’s the only character in the novel who doesn’t look or act funny, and Bellairs was relying on reverse imagination to suggest ordinary sanity and appearance. 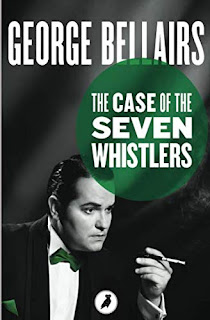 The coroner, Emmanuel Querk, tall and thin with “a peculiar head...only a little broader than his long neck,” ending in a point from which “a fringe of downy grey hair spread like a curtain over his neck and ears.” A man of multiple quirks, including an aversion to noise, Querk rushed through his inquest into the murder, adjourning it soon after a “hurdy-gurdy started in the street outside just as he was directing the jury and he could hardly wait for their verdict and beating a hasty retreat to his private room. There he locked the door, unlocked a cupboard and took out a bottle of whiskey. It was all that stood between him and the complete madness to which his wife’s endless debts and incessant nagging were driving him.”
Even Bellairs tires of the inquest, giving us a break from monotonous testimony because “we have heard it all before and it would be sheer torture to go over it again in the form of Puddiphatt’s official statement.”
Bellairs evidently has a thing for tweaking clerical noses. In Intruder in the Dark, the first of the Detective-Inspector Littlejohn series I’ve read, he makes fun of the vicar’s “fruity voice.” In Seven Whistlers, the Rev. Mellodew Gryper has “a voice like an oboe” and is shown Ichabod Crane-like at a funeral in which “the mourners had to struggle to keep themselves upright against the stiff breeze blowing from the sea. The parson’s vestments flapped at right-angles to his body. The bearers staggered beneath their burden and tottered from side to side as they advanced to the graveside. Tall, tortured trees surrounded the churchyard, leaning at an angle caused by the fury of the prevailing winds.”
In another scene, conducting sack races for children in a local festival, his oboe voice is grist for sniggering: “‘Oh, what a shame, Bertha. On, on, you’re winning. Ohhhhh,’ he oboed, trying to urge them all on without fear or favour. He sounded at times as though somebody were murdering him, and his contortions suggested that someone might have dropped a wasps’ nest down his pants.”
One last ridiculous character of the many who tortured my funnybone as I vaguely wondered which one of them might not have been the villain who locked poor itsy bitsy dancing Grossman in the chest and left him to suffocate, essentially buried alive. I give you the insignificant-seeming Mr. Troyte, in a walk-on, walk-off role (perhaps exiting in handcuffs, making wuffing noises as he goes?): “a small, portly man who looked like a pug dog with George Robey eyebrows...
He had a pug dog’s teeth, as well, and his voice came from straight behind them, a sort of wuffing noise, thick and unctuous. Like one of Walt Disney’s large, benevolent animals. It gave you a queer sort of feeling when he gave tongue. As though a pet dog suddenly started to articulate...His pug’s nostrils were wide as though from continual deep inhaling and he looked to have blown his teeth half-way out of his gums by vigorously exhaling through his lips...” 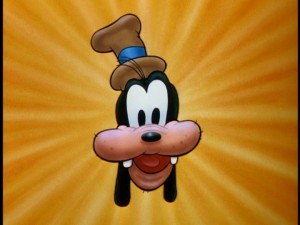